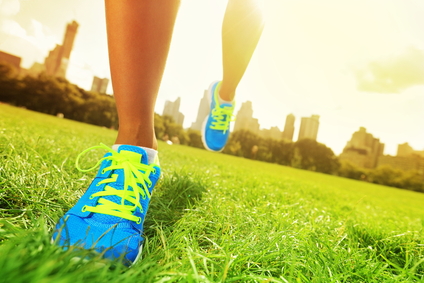 Q: My daughter and I are doing a 5K tomorrow and I haven't run since joining the meal plan. Any post-workout/run suggestions for food or drink?

A: Make sure you hydrate after the race. Some people feel queasy after running and can't stomach solids, so a liquid is the best option for the first half hour or so. A friend of mine is a marathoner and she likes to drink smoothies after long runs (10+ miles or more), but she waits 30-45 minutes when her stomach settles down a bit more. There isn't really anything special you need to eat, you just need to rehydrate and replenish the calories you've spent (make sure you include healthy carbohydrates to refill your glycogen stores). Also, make a healthy choice — greasy food, etc. after a race makes for a gagging experience :P

There's also a recipe for "homemade gatorade" that I call Herbisport on happyherbivore.com that you might want to check out for the race! Good luck!! Have a great race!!

Q: My period started and I couldn't help myself — somehow I always crave so many more heavy salty fatty foods. And, of course, chocolate. And the healthy kind doesn't satisfy and I fall off the vegan wagon. What do you recommend for not going too overboard? Do more vegan women experience this? Do I need a supplement?

A: I'm not a doctor, but I'm going to guess it's a food addition you're battling — especially if you just recently went plant-based. If you were craving peas, that would be one thing, but you're craving junk ;) That's probably not the body saying it needs a nutrient ;)

I used to crave chips and brownies when I had my period but after I was plant-based for a while (and broke all my food addictions and habits), it went away. Unfortunately with food addictions, you just have to break the cycle.

You could also try to appease your cravings by eating a small piece of dark chocolate (maybe salted dark chocolate?) or bake up some healthy baked french fries and sprinkle them with salt. Or nibble on kale chips, just to help you get through it. You could also make the single-serving vegan chocolate brownie! Resisting is hard, but in the end makes it easier.

For more info, see my posts about curbing emotional eating and food cravings and addictions.

Q: I have been trying to make homemade hummus for awhile now and just can't seem to get it right. I have tried several recipes, and it just tastes bitter or something — horrible aftertaste. I use tahini. Do you have any ideas that could help me get this right?

A: Hmm... I'm not sure why it would taste bitter unless one of your ingredients has gone bad. Have you tried making it without the tahini? That could be the problem (tahini can go rancid). Are you using coriander (cilantro)? Some people have a taste sensitivity to cilantro (also called coriander), and maybe that's what's causing the bitter taste. Are you using cumin? Some people don't like that spice either. It's hard to say without knowing exactly what you're putting into the hummus. Try making the hummus with just the chickpeas and a little lemon. Then add flavors little by little from there. You can use my recipe for hummus on the blog or the hummus recipe in HHA, which is slightly different. Engine 2 also has a great fat-free hummus recipe.

Q: I'm transitioning into a plant based lifestyle. I would say that I am about 90-95% there. Since getting serious with the plant-based diet (almost 2 months), I often feel like I have become more forgetful. Has anyone else you know experienced this? I have read that it could be a lack of B12 (I know, meat eaters can be also deficient in B12), but before I start blaming that, I was wondering if you knew of anything else it could be? If it is a lack in B12, could you recommend any food items that I could incorporate into my diet?

A: If you suspect you have a deficiency, make an appointment with your doctor to have yourself tested. If you are deficient, your doctor will probably give you a B12 shot (that's what happened to both of my meat eater friends who were deficient). You'll also want to take a supplement regularly, so talk to your doctor about which B12 supplement she or he recommends. While some foods like cereal, almond milk and nutritional yeast are fortified with B12, it may not be enough — and while I'm not a doctor or nutritionist, I don't think eating more of them will necessarily fix your deficiency. I would go to a doctor ASAP. Your memory (brain!) isn't something you want to mess with :) It might also be a symptom of something else not related to diet — you never know. Take care of you :) Feel better. For more information on B12, readDr. McDougall's newsletter on B12.

Q: I just recently found out I'm allergic to to a few things and now I have no clue what to eat. Can you help? It must be gluten free, corn free, dairy free, soy free, and peanut free.

A: The meal plans! You can just leave off corn, and use rice tortillas instead of corn tortillas when we call for them. Our meal plans are always gluten-free, soy-free, dairy-free and peanut-free (or you can sub almond butter or sunflower seed butter in the rare instance we use PB). For more info, see my Herbie 101 Series post about allergies and my post on allergy-free cooking.