Happy Herbivore on Emeril: The Recipes

Remember when I said I was on Emeril's show?! Well it aired last night. (Did you see me in his kitchen??). I promised I'd veganize all his recipes when the show aired and I have (mostly!).

Luckily, Emeril & I seem to be on the same wave length because I had healthy & vegan versions of all his dishes already -- except for the biscuits which I was really excited to try my hand at.

For the ribs, use this vegan recipe with a tangy bourbon-based BBQ sauce (that's accidentally vegan). Then run a few roasted red peppers through your food processor or blender and add them to the cheese sauce in my easy mac n'cheese recipe. Substitute my whole wheat veggie biscuit pot pie for Emeril's pot pie and round the meal out with my instant banana-flavored ice cream and fat-free chocolate syrup. If your heart is set on a pudding, though, there are plenty of banana soy puddings on the market or you can make my ice cream with very ripe bananas (not frozen) and serve it in a bowl with crushed whole wheat gram crackers (but I do have a graham cracker crust recipe, too!). 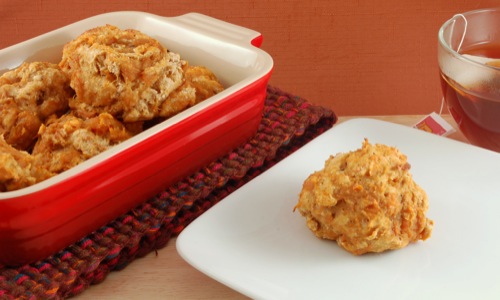 Now for the biscuits! Mmm... sweet potatoes. check back tomorrow for the recipe!