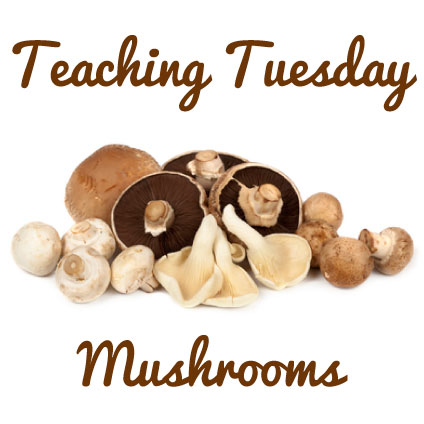 This week's Teaching Tuesday subject is one fun-gi. No, it's not Scott! I'm talking about mushrooms!

There are many varieties of mushrooms used in the culinary world, so to keep things simple, this post is dedicated to the ones found in HH recipes.

Oyster: As the name suggests, these fungi are known for their oyster taste (not to mention shape and smell), which is why I use them in "Oyster" Po'Boys (EHH), "Crab" Cakes, and Oyster Mushroom Scampi.

Portobello: It may be hard to believe, but Portobellos are just mature cremini mushrooms (I guess that's why they call them baby bellas!). Portobellos are large in size and have a meaty texture as well as taste, which make them a popular substitute for meat. Belly up to the bellos with the Portobello Steaks (HHC), Island Portobello Burgers (EHH), Bella Tacos (EHH) & Irish Stew (HHLL).

Shiitake: Shiitake mushrooms are native to East Asia and have a rich smoky flavor. I don't use them too often, but when I do it's in the Shiitake Miso Soup (EHH).

One final note... I always get a lot of questions about substituting mushrooms, whether it be due to allergies or simply not liking them. Unfortunately, mushrooms are one of the few ingredients that have no alternative or culinary substitute (miso is another). If it's something with just a few mushrooms in a big mix of veggies, you could try adding another vegetable, but if the mushrooms are a main item, the center of the recipe or used specifically for flavor, you'll have to skip it. (Sorry!) FYI, I hated mushrooms until I was plant-based. Now I can't get enough :)

What are your thoughts on mushrooms? Yay or nay?