When I was growing up as a vegetarian, there weren't many substitutes around. I think there was one brand of veggie burgers and they smelled (and tasted) horribly. Even when I adopted a plant-based (vegan) diet 5 years ago, there wasn't much in the way of substitutes and now I'm (pleasantly) overwhelmed by all the different products out there.

You'll find vegan substitutes for just about an type of meat or dairy product, from chicken to cream cheese, to deli slices, to butter, and even marshmallows -- there pretty much is a commercial replacement for everything and if there isn't, you'll find a recipe to DIY online or in a vegan cookbook.

99% of the time, you can use the vegan substitute just as you would have used the meat or dairy product.

While I do enjoy a whole-wheat bagel topped with vegan cream cheese, I don't eat it often. We try to avoid eating commercial vegan meat and dairy substitutes regularly because they tend to be very processed. I think substitutes can be helpful during transition to a plant-based diet, but my advice is once you've settled in to your new diet and lifestyle, let these things accent your diet -- keep "veg" in vegan or vegetarian (or "plant" in plant-based).

Which brings me to my next point: just because it's vegan, doesn't mean it's automatically healthy, too. 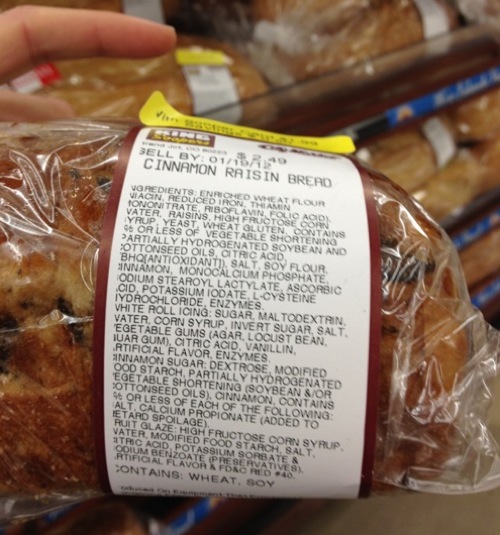 For example, this bread appears to be vegan -- but just look at that list of ingredients. That's crazy. Really, how many ingredients does it take to make bread? Even my Beer Bread (p. 69 EHH) has only 5 ingredients! So make sure it's vegan and healthy.

Then there is cost to consider, too. Commercial substitutes are easy, but they can also be very expensive... and if we're totally honest, often times, homemade versions taste much better. For example, I would rather make my own Soy Yogurt or Black Bean Burgers than buy one pre-made ones. Pre-made burgers don't save much time either, since they generally takejust as long to cook as homemade, and my burgers are quick to prep. And my yogurt is a fraction of the cost of the ones at the store.

There are other substitutions that I make when cooking as well, like replacing eggs, butter, fat, and oil, no matter what I'm making. Applesauce and bananas are usually my go tos, but I still use shredded zucchini or canned pumpkin here and there. You can read more about replacing eggs, and fat when cooking and baking on my previous posts as well.