Hi Herbies! It's me, Courtney. Earlier this week I wrote about being an iron deficient anemic. Today I want to talk about allergies, particularly black pepper.

You may remember that I have many allergies from my interview a while ago, and one of the most difficult to avoid is black pepper. According to my allergist, this is actually a common allergy. Many people may only have mild reactions, and not even know they are allergic. 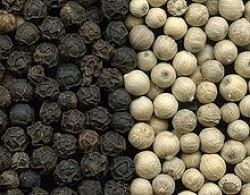 I actually want to talk today about the difference between white and black pepper ... actually about peppercorns in general.

The pepper plant (piper nigrum) is a vine that producesberries. It is these berries that we use to season our food.

Green peppercorns are picked before the berry ripens, and are usually packed in liquid, freeze-dried or dehydrated to keep the green color. They have a very strong upfront flavor, but it doesn't last.

Black pepper is what most people are familiar with. It comes when the pepper berries are picked before fully ripening, and then allowed to dry. As the berry dries, it darkens giving it that black color. This is the strongest flavor of the berries. This is usually sold at the store, either as the whole peppercorn or the ground version. 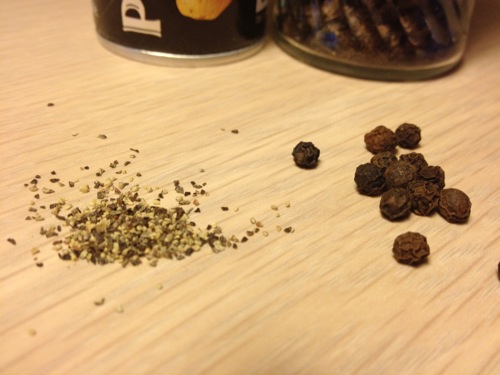 Note the color difference with the ground pepper above. This is not from there being a mixture of peppercorns, it is from the whole peppercorn berry (seed and all) being ground.

Like I said above, black, green, and red peppers are berries, and like all berries they have a seed. It is this seed that we call white pepper. To make white pepper, the berries are harvested and washed in water to remove the outer hull, leaving only the seed. As the seed dries it becomes white, and thus white pepper. It has a lighter pepper flavor that usually stays in the background. Some cooks use this for aesthetic reasons in light sauces or soups.