I've been silenced (the vegan dramaz needs to stop)

I was going to delete this post,then decided to keep it. with one caveat. I don't want to waste any more time talking about what happened, rehashing, or dignifying any of the thefalse accusationswith commentary. Let's just leave it at: it was an awesome day for my book (#145 on Amazon!)and amazing day for veganism thanks to the Oprah show, with some unfortunate blips along the way. and hopefully now, we're all better for it!!

Today is the official release of my cookbook!

Yes, I know I celebrated it last week, but that was before the release date got moved to today (so! that means you should be able to find it in Borders and all the other stores that didn't have it last week!)

That also means we need to keep working hard this last week — we're in the home stretch for #1! Keep spreading the word!

Anyway, despite this being birthday #2, I still expected today to be a happy day... only, I woke up to a mound of unpleasant email.

Now, before I go any further let me explain a little about myself.

At 29, I accept this about myself. I am highly opinionated. I'll probably tell you my opinion even if you didn't ask for it. and if you are my friend, I probably won't sugar coat it at all. Some of my friends really love that about me — my brute honesty, while others wish I'd take a class on sensitivity (I'm working on it).

So, because I am opinionated, and have a big mouth, it should go without saying that I LOVE to leave reviews. I review everything, but I really take time and put considerable thought into my reviews — and they are always fair. AND because I'm the kind of person that won't say anything on the Internet that I would not say to someone's face, I even use my real name Lindsay Nixon. 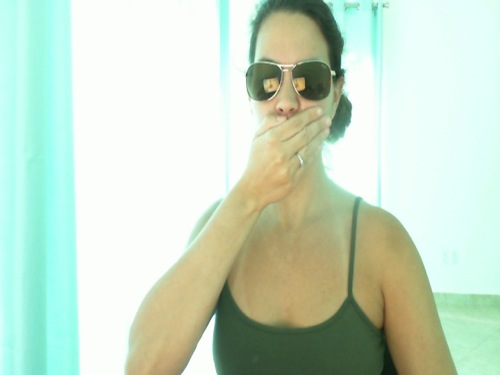 But not anymore. Now that I have published a book, I am apparently no longer allowed to have a public opinion. Any review I left that was not 5 stars (but 4 stars) was viciously attacked by a certain well-known author's fans. I've been accused of all sorts of sabotage, even when I left these reviews long before I dreamed to write my own cookbook!

And while I can kind of deal with the haters, these "rabid fans" have now taken to attacking people that leave ME a kind review, but (golly gee!) maybe didn't like some other book. That I can't deal with. I love my fans, I certainly don't want to bring ugliness into their life.

Before my book came out, a few fellow authors emailed me to warn me this might happen — I'd heard malicious rumors that certain authors, and certain authors' fans, leave fake reviews on the competition trying to sink them, that they attack any and everyone who doesn't give their favorite author a 5-star review... and I thought "This can't be true!"It just seemed so absurd!

But now I think it is. And that is really sad.

I've been accused of sabotage (a 4-star review is sabotage, btw) and now the allegations are extending: people who happened to rate me well, but maybe not another cookbook as well, well the "rabid fans" insist these folks are either doing my bidding for me or it's me making fake profiles.

BTW, not only do I not have the time to do that, I wouldn't even know how. I couldn't even figure out how to get my Mom her own Amazon account without her real name on it. (She likes her privacy).

But is it really that absurd of a notion that someone might LOVE one vegan cookbook and not care for another? Is it so absurd that we all have different tastes?Is it possible that not everyone worships the same God? (Okay, maybe I went a little far with that last one — forgive me, my panties are in a twist).

As a result, I deleted every review I ever left on Amazon for vegan cookbooks (23 in total), except for 2 that I did not have the heart to delete because people had voted them as "helpful."

But there is an even deeper loss. I once left an... unpleasant review of Bryant Terry's cookbook. Bryant called me out on it. All of it. After a few (heated) email exchanges, the clouds cleared, the sun came out and would you believe it?We're pals. He's been a wonderful "colleague" ever since. I like to think we've helped each other grow. I have certainly learned a value lesson or two from him and that situation and I can't help but think, if I'd never said a word (even if I want to take them all back now) I wouldn't have had this other experience...

and now I'm being robbed of this chance, and so are others.

Why can't we agree to disagree... different strokes for different folks?

Lately it seems everyone has been blogging or tweeting that the vegan community reminds them of high school — is that really the community atmosphere we want? Do we really think we'll attract people to join us that way? It makes me want to grab my Hello Kitty lunch box and run.

Live and let live, I say.

There are worse things than having multiple famous and beloved vegan cookbook authors.

UPDATE: Hours after this posting, a seemingly fake 2-star review appeared on Amazon for my book (it's really doesn't make sense).

UPDATE #2: that review was deleted, but another equally suspicious one appeared, and someone else took the time to mark all 76 (!!) 5-star reviews as "unhelpful" -- really?

UPDATE #3 (and last thing on this topic--I'm over it) thx to a tip, I found the root of it-- a forum dedicated to my book on the PPK where it starts off nice and genuine and then quickly turns into a witch hunt, with horribly mean accusations and statements made by Isa! Then she closed the forum so I couldn't defend myself and leave any sort of reply to clarify anything.

and to think, she used to be my hero.

I wish they'd see all this negativity, all these lies, all this hate, doesnothing to help veganism -- It would be a better use of their energy to help spread veganism, rally against the people who attack our community as a whole, etc. then waste their time ripping apart fellow vegans.