Off the cuff, I really like the idea of this book! 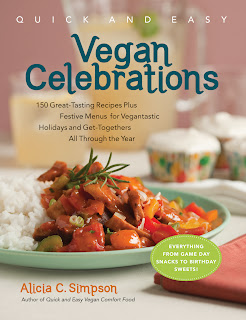 When selecting a handful of recipes to try for a review, I zoomed in on Mardi Gras (because I have a huge soft spot for New Orleans grub) and Cinco de Mayo because Scott lives and dies for all things Mexican-inspired. I also salivated at the thought of her Irish Creme (from the St. Patty's Section; though this is more of a Xmas drink for me)...but I can't find a small bottle Irish whiskey on this island and I really don't need a BIG bottle of temptation!

Up first was the Papa Chorizo Frittata, but I had to do a lot of substitutions with this recipe due to my limited ingredient access. For example, I used cornstarch, yellow mustard, a brown potato, raw red bell pepper and cilantro instead of parsley (I think cilantro is more fitting for Cinco de Mayo anyway). I also omitted the oil and used a square pan...

But despite all my substitutions, the frittata came out really delicious---and presented beautifully as you can see in the photo. In fact, Scott loved it so much that he said "I could eat this every weekend!" Well, alright! I made it again a few days later for a weekend brunch and my neighbor Jeremy, who had never eaten vegan food before (let alone tofu), ate it up -- saying it was awesome. He also ate the leftovers straight out of the fridge cold!

I think it's safe to call this recipe a winner -- and highly adaptable to what you have on hand, and I love recipes like that!

[FYI--Alicia also highly recommends using a specific brand of vegan chorizo, which unless you live in a large metropolitan area in the U.S., I don't think you'll be able to find it, but having had that brand and other brands before, I don't find them to be too dissimilar. (Next time I'm going to use the chorizo recipein my cookbook as a substitute since its less processed, and fat-free).]