Confession: I didn't eat tofu for the first two years I was vegan. This is funny to me now, as I love the stuff (I could easily eat it at three meals a day, that is, if I wasn't so focused on eating a balanced diet!) and because I was a former tofuphobe, I've created three tutorial videos about tofu for my comrades.

But this post isn't about tofu...it's about seitan...(seiten? I always struggle with spelling!) which took me exactly three years to try. Well, I suppose that's not completely true.

Shortly after I went vegan, I tried a "beefy seitan" recipe that was floating around the blogsphere. After traveling to no less than 3 stores to get ingredients (perhaps now it makes sense why I'm so obsessed with "every day" ingredients!) and cooking this "beefy" monster for some 10-hours...I hated it.

Some blog friends convinced me I just needed to try another recipe, so I tried the recipe in one if Isa's books--I forget which, and it didn't come out right (my fault I'm sure, not blaming Isa's recipe) so that was it. No praising seitan for me!

Then I met seitan again, (I ordered unsuspecting) and fell head over heals: (This is "No Name" at grasshopper---there is nothing "healthy" about it. The seitan is deep fried and then coated in a sweet sauce--but it's DELICIOUS!)

After a few happy bellies (and a move across the country--away from the above seitan dish) I tried to make my own again. It was a DISASTER -- as in splattered all over me and most of my kitchen. I'm still scratching my head on that one.

Always the optimist, I tried a few more times, with varying recipes, until I ultimately concluded: seitan was not for me. To make anyway...

but then.... I starting writing my cookbook... and I kept thinking, wouldn't it be GREAT if I could include a seitan recipe!?I mean vegans LOVE their seitan!I shared my previous woes with my testers and many of them admitted to having the same problem -- they couldn't rock the at-home seitan either! I smelled a challenge...

A few experiments later, I mastered a chicken-style seitan...and even pot roast! Which leads me (finally!) to today's recipe.

I've mentioned once before how peculiar ideas sometimes come to me and if executed, I know they would either be fabulously awesome or disastrously gross.

My most recent "wild" idea was to cook seitan in beer.I had wanted to cook it in a nice, dark beer -- maybe Negro Modelo, but one thing this island is sorely lacking is good beer--or even a variety of beer. Everything is of the Amstel Light and Heineken persuasion...

I used Presidente, which comes from the Dominican Republic (I try to support my neighboring islands) -- and I'm glad I did. I think a light beer is key here--and as I was tweeting my experiment, @snarkyvegan echoed, saying it's been her experience that cooking (generally) with darker beers makes things bitter.

I started with this seitan recipe for "ribs" because I like the meaty texture you get from baking seitan, though I substituted in some chickpea flour because I thought it would give me more of a shaved meat/carnita texture. I also adapted my recipe for "mock beef broth" in my cookbook for the "wet mix" (and because I was dying to experiment with vegemite) but my regular broth recipe will do you right, too.

and then I cooked it in beer.

The result? FREAKIN' AMAZING. Not only is the flavor divine -- it really has a shaved meat... a burrito/fajita "chicken" texture... it ROCKS. I literally thought I was biting into something from Taco Bell---it was crazy!

Here are some pictures of the seitan process: 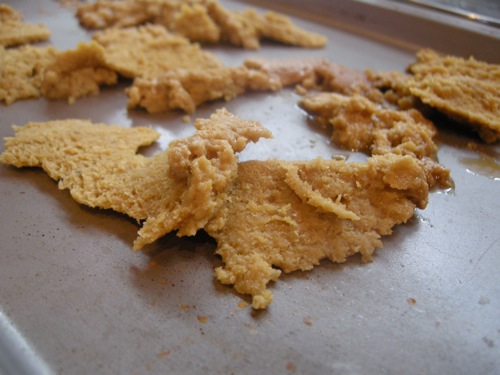 Freshly sliced after boiling in beer. 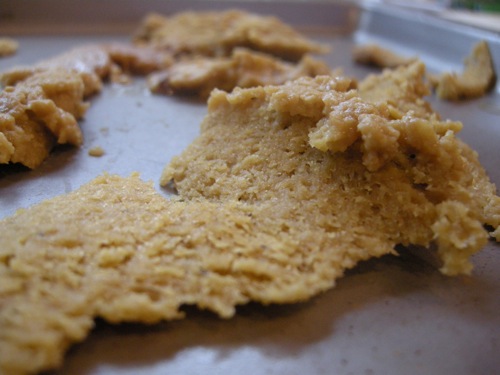 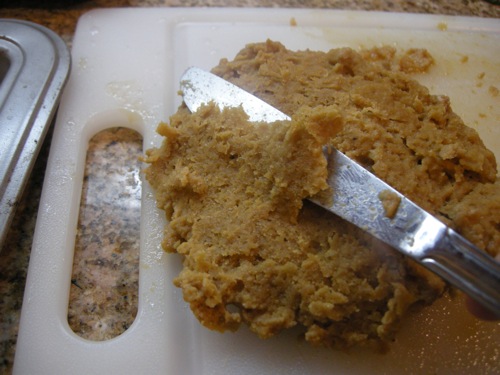 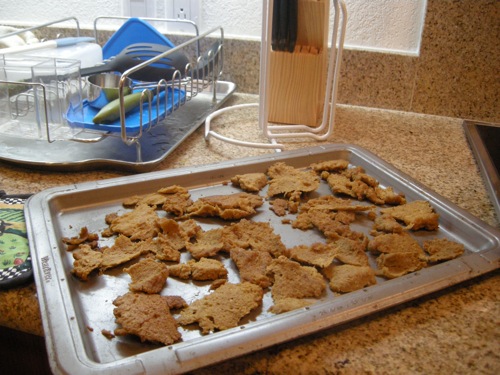 Out of the oven -- a little crisper. 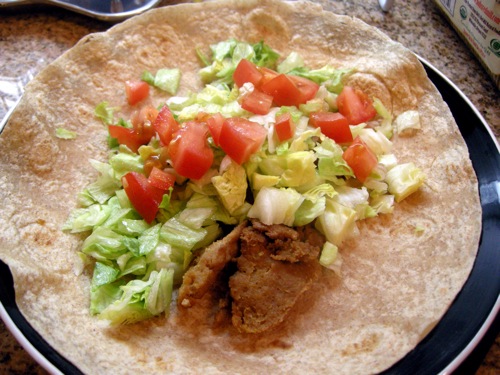 Assembling... (lettuce, tomato, whole wheat tortilla, plus I spooned some of the "cooking juices" over top) 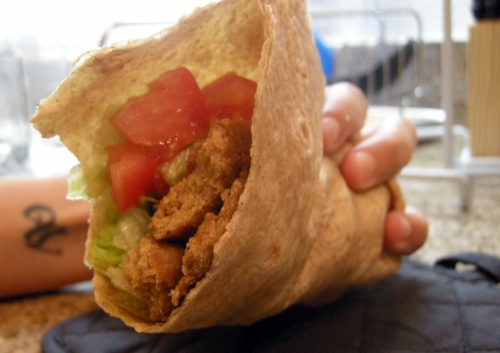 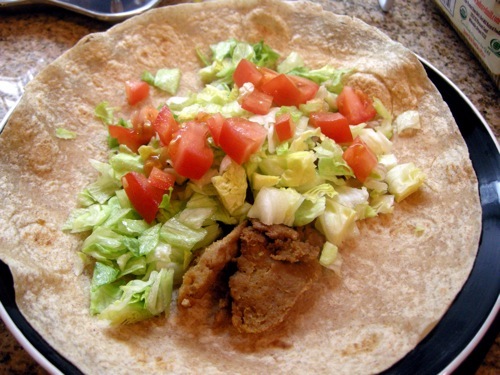 This slow cooked seitan has the perfect texture for carnitas or fajitas. It's juicy and tender but slightly toothsome.

Whisk vital wheat gluten, chickpea flour, 3 tbsp nutritional yeast, 2 tsp onion powder and 1 tsp garlic powder together in a bowl and set aside. Combine warm water (hot from the tap) with soy sauce, 1 tbsp nutritional yeast, 1/2 tsp vegemite (or marmite or vegan Worcestershire sauce), 1/4 tsp garlic powder and 1/4 tsp onion powder together. Pour liquid into flour mixture and stir to form a dough. If it's too dry, add another tbsp or two of warm water but becareful not to make it too wet or soggy. You want it to be firm, but pliable and moist. Knead 5-10 times then place into a large pot.

Pour beer over top (I left mine out for a few minutes, but it was still rather cool), cover and bring to a boil. Once boiling, add 1/2 tsp more vegemite, reduce to low and simmer until most of the liquid has absorbed, about 45 minutes to 1 hour. About 1/4 cup cooking liquid should line the bottom of the pot.

Use a butter knife (not a sharp knife) to shred thin slices off of the seitan. If the seitan is too wet or juicy for you, place slices on a cookie sheet and bake at 350F for 8-10 minutes on each side. Be careful not to over bake the seitan -- you want it slightly firmer but not dried out and hard. (see blog post for photo tutorial).

For "carnitas" slap seitan into whole wheat tortillas with lettuce and tomatoes, and spoon residual cooking liquid over the filling.