On the fly Shiitake Stir-Fry

At the grocery store this week I passed by some rather cutesy shiitake mushrooms and realized they were an underutilized ingredient in my cooking.

Sure, I love oyster mushrooms and the mighty portobello--heck, I even cook with white mushrooms from time to time, but shiitake? never. So, I picked a few up and headed home with my new fungi friends.

For a few days we engaged in starring contests; mostly I was just mystified about what to do them, but finally, last night, I pulled them out and decided I'd make it work---youknow, before my fungus grew fungus!

A quick Google search led to the following description: "rich & woodsy with a meaty texture."

What does that mean? Is that like when people say something has as an earthy taste, they really mean it tastes like dirt? Does this mushroom taste like I'm licking tree bark?!

So that's when I solicited some help from HH's Facebook fan page ;-)

Right away I noticed a lot of Asian-inspired recipe ideas so I settled on an easy stir-fry. (Funny--when we were first vegan I swear all we ate was pasta and stir-frys and now I hardly ever make either, which is a shame because stir-frys are delicious!). 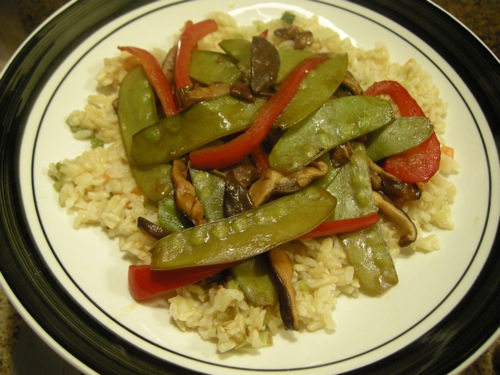 Living in the Caribbean has made me quite fond of fresh garlic and ginger so I started with plenty of both (about 3 garlic cloves and 2.5 tbsp minced ginger) then added in leftover scallions, a fresh pepper and a good pinch of red pepper flakes. I sauteed them in a bit of water for a few minutes, then mixed it up with my cooked brown rice.

Then the shiitakes (stems removed, and sliced) went into my skillet with 1 tbsp soy sauce and 1 tbsp apple cider vinegar (I would have preferred brown rice vinegar, but acv was all I had to work with). I cooked the mushrooms for a few minutes, and then added my snow peas and red bell pepper slices. I continued to cook until everything was cooked, but still mostly crisp. I also added another 1 tbsp of soy sauce and acv, plus an extra splash of soy sauce (I'm using low sodium btw) and a few drops of hot sauce (Szechuan would have been my first choice, but I didn't have it). I spooned it all over a plate of the rice andvoila! On the fly fan-inspired shiitake dinner!

(FYI shiitake mushrooms are delightful and definitely not tree-bark-tasting... at least not what I assume tree bark tastes like...I've never eaten tree bark...unless you count cinnamon...)