I've had this head of cauliflower sitting in my fridge for almost two weeks. I bought it for raw week hoping to try my hand at making fat-free raw "rice" (by grinding up the cauliflower) but I never got around to it.

Stumped on what to do with my cauliflower I asked twitterland and HH's Facebook fans for some help. Over 40 suggestions came in and they all sounded amazing! Roasted Cauliflower Florets, Cauliflower Soup and Cauliflower Mashed Potatoes were by far the most recommended recipes, but several curries and other Indian recipes (such as aloo gobi, vindaloo and vegetable korma) came my way, too.

I also momentarily tossed around the idea of smothering the cauliflower florets in my mac n' cheese sauce and baking it. (For the record I still think this sounds good) But having just had Smokey Black Bean Enchiladas with a "cheese" sauce the night before, I thought that might be nooche overkill. 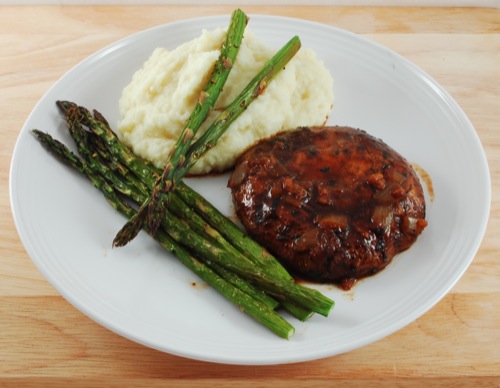 In the end I decided to make "mashed potatoes" because I love me some mashed taters! I paired the "mashed potatoes" with my portobello steaks (my Dad's favorite recipe) and braised asparagus (a cookbook recipe). Yum! This meal is so healthy but also very quick to make. I managed to have the whole thing done and plated in 15 minutes! Awesome!

I was also pleasantly surprised with how mashed potatoes-like the cauliflower came out! I don't think you'll fool anyone, but it is close and a lot less starchy! Enjoy! and thanks again to everyone who made suggestions!! <3 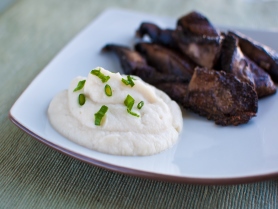 A creamy and low carb alternative to traditional mashed potatoes. Nutritional yeast may be substituted for the vegan Parmesan.

Cut cauliflower into florets and gently steam for 15 minutes or until just fork-tender (but not over cooked). Transfer to a food processor or strong blender with remaining ingredients. Allow motor to run until its smooth and creamy like mashed potatoes, stopping periodically as needed to scrape the sides and break apart large chunks. Also add more non-dairy milk if necessary to get the mixture to fully incorporate (you may need more with a blender than a food processor). Once fully incorporated, smooth and creamy taste; adding more onion or garlic powder as desired plus salt and pepper to taste.