Using Guilt for Good (The Difference Between Shame and Guilt)

You are listening to the Shortcut to Slim Podcast. Show details — Hosted by Lindsay S Nixon — Season 2: Episode 5;

In episode 4 we looked at shame and self-criticism and if they are as motivational as we think they are.

The research is clear on this:

Shame tactics do not lead to improvement.

The more shame a person feels, the more anxious, detached, and rebellious they become.

Using shame also has the unfortunate paradoxical effect of increasing the very behavior you are attempting to stamp out.

Anti-smoking campaigns are a real-world example of this. Those campaigns made smokers feel more positively about smoking.

Psychologists call this the “boomerang effect.”

Does this cross-apply to food?

That is, if you warn a dieter how unhealthy a food is, will they see it more positively or eat more of it?

In fact, the findings are near identical to the smoking studies!

Even more alarming is how much more of those foods they will then eat.

Afterwards both groups were put in a room together to watch a movie where there just happened to be a plate of cookies.

Those that heard the negative message consumed 39% more cookies!

Researchers theorize this happens because the negative, “police” messages make people feel like their freedom to control their food choices is threatened.

I’ve watched this play out time and time again in vegan and plant-based communities too.

Actually, let me be super clear about that: No one wants to be policed.

You will not convert anyone with judgemental elitism.

Praise the efforts someone is making and they’ll be more likely to keep doing it.

But if you focus on where they fall short?

That will stunt their growth and their progress AND it may even turn them off completely.

Sell the upside to the alternative.

Be positive and don’t police.

But there’s something even bigger to consider here:

NEGATIVE FOOD SENTIMENTS ARE ALL AROUND US.

The government and health organizations (like The American Heart Association) spew out “health warnings” at us...

Telling us to limit calories from saturated fat or sugar…

Yet how many of us still aren’t listening?

So all this begs the question:

If health warnings and shame won’t motivate us, what will?

The surprising answer here is GUILT.

Now I know what you’re thinking...

wait a minute…. Aren’t guilt and shame the same thing?

People who feel shame suffer.
Shamed people dislike themselves.
This is not good.

But people who feel guilt are INVESTED in learning about themselves and they are MOTIVATED to become better.

Guilt-prone people are also less concerned about hiding their bad deeds because they are ready to repair the damage.

I see this often in our private Facebook group and member forums.

Here are some examples:

You can see how shame made her feel bad about herself to the point where she wouldn’t even talk to supportive friends… But once she stopped feeling shame and only felt guilt, she was able to motivate herself to become better and do something.

The guilt was transformative and helpful. The prior shame was not.

This person doesn’t feel ashamed. They feel guilty for eating what they see as crap, but they’re using that guilt to motivate themselves to get back on track.

This is a great example of guilt as motivation:

She is not ashamed of what she ate on vacation. She’s feeling guilty from all that indulgence, sure, but that guilt is so motivating that ON HER WAY HOME FROM VACATION she’s already making a plan to repair.

I think this also explains eating in secret.

We eat in secret not just because we are ashamed of what we are doing, but of who we are.

If you stop the self-shaming or seeing it as shameful, chances are you will stop doing it.

It’s okay to feel guilty about what you ate, but guilt is not shame.

This Alcoholics Anonymous study is a fantastic testament to the difference in guilt versus shame mindsets:

The researchers in this study wanted to see if they could predict sobriety success based on how much shame or guilt the new alcoholic felt.

They interviewed people who were newly sober, asking them to describe their past experiences with drinking.

Based on their words and body language, psychologists could evaluate how much shame or guilt each person had.

Four months later, the alcoholics who felt guilty, but little shame about their drinking, averaged 7.91 drinks.

Those who had a shameful relationship to their drinking behavior found it much harder to recover from a slip-up.

Did that just blow your mind up too?

The alcoholics who felt guilty, but not ashamed, basically stayed sober.

Those who felt ashamed? Definitely did not.

Harboring shame makes it more difficult to recover from a transgression.

GUILT, however, can help motivate you to improve your behavior because guilt (not shame) is the remorseful awareness of having done something wrong.

This “remorseful awareness” as the success tipping point is best demonstrated through research on inmates.

According to a study by the Bureau of Justice on 272,111 prisoners released in 1994, 67.5% were rearrested for a felony or serious misdemeanor within 3 years of release.

That is disheartening to hear…

Why did those inmates beat the odds?

Guilt-prone inmates, that is, inmates who felt guilty about their past wrongs and were motivated to confess, apologize, and fix the very problems they caused upon release, were less likely to be rearrested.

Of course there are other important factors as well, including access to treatment, jobs, family and community support, etc. but the powerfulness of a guilt mindset can’t be overstated.

Now you may be wondering…

Why does guilt work but not shame??

Wouldn’t *those* feelings motivate them equally? Or MORE SO than the inmates who just felt a little guilty?

Here’s the big problem with shame:

With shame we don’t just see our behavior as wrong or mistaken, we see OURSELVES as being fundamentally bad people, broken.

Shame is experienced as a negative metric of who we are.

Think back to Crum’s housekeepers in episode # who were told they were exercise superstars.

When you feel shame for what you ate or didn’t eat, for what you did or did not do, for how much body fat you have—that shame becomes global.

You feel bad about who you are.

You believe you have no control over aversive outcomes.

You feel extreme distress and want to shrink, avoid, escape, or hide.

Feeling ashamed also causes you to blame others and look for scapegoats.

Guilt, however, is an awareness of wrongdoing that is LIMITED to a specific situation.

With guilt, you do not feel about who you are as a person, you feel bad about what you did.

You feel remorse, recognize personal control, and become motivated to repair the damage.

With shame you ask, “How could I have done that?”

With guilt you ask, “How could I have done THAT?”

Is this all mindset: YOU BET.

This also connects to what you’ve been hearing me say all season, “you can’t take care of a thing you hate.”

It’s easy to make personal attacks and to conflate guilt with character flaws.

Flawed acts do not provide evidence you are a flawed person.

Take personal responsibility for your actions.

Bad bosses, bad days, bad timing, all the bad things are never going to go away.

Draw attention to the specific action that led to that harm.

Ask: what is the specific action that led to this harm?

And if you’ve been wondering since episode 2 what Watkins meant when he said, “In order to be brilliant every day you have to make an effort to understand what is going on on in the inside and ask difficult questions”

THIS IS IT. This is that question.

Ask: what is the specific action that led to this self-harm?

If we feel guilty it’s because we care, take reassurance in that.

I recommend listening or re-reading to this episode a few times.

It took me MONTHS to fully grasp and understand the difference between guilt and shame and it won’t sink in all at once no matter how smart you are.

Here is a helpful visual comparing guilt and shame: 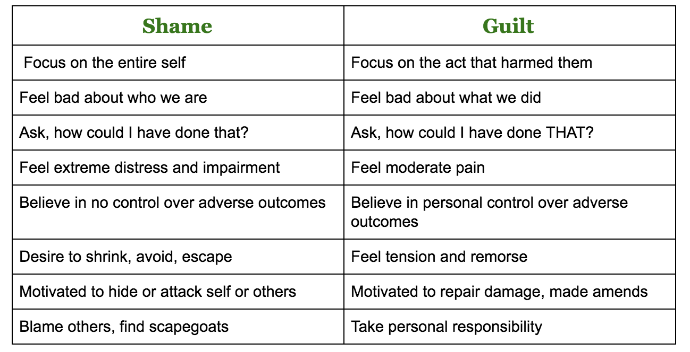 This chart is adapted from the book The Upside to Your Darkside.

This is episode 5 of Season 2.

The Upside to Your Darkside https://www.amazon.com/Upside-Your-Dark-Side-Self_Drives/dp/1491528222?tag=donorsclicks-20
If You Warn Dieters How Unhealthy A Food Is, They’ll Just Eat More Of It http://www.huffingtonpost.com/science-of-us/warn-dieters-how-unhealth_b_9144668.html

Blaming your slow weight loss on having a slow metabolism? Listen as I debunk this misconception +what you really need to know about your metabolism

What is better- frozen or fresh? The answer may surprise you! Listen as I discuss the pros and cons of "fresh" food.

Episode 2: Get Results Every Day (How You Think Determines What You Do)

Why it is that even when we know what to do, we still don’t do it? How you can get control, change your behavior, stop weekend overeating.