Get Results Every Day (How You Think Determines What You Do)

You are listening to the Shortcut to Slim Podcast. Show details — Hosted by Lindsay S Nixon — Season 2: Episode 2;

In this episode you’ll learn:

and in a way that requires no willpower or self-discipline…

In the off season I continued my personal obsession with productivity as it relates to work performance.

Inside that rabbit hole I found a TEDx talk with Dr. Alan Watkins called “Being Brilliant Every Single Day” and was surprised by how much his neuroscience research on better job performance applied to weight-loss.

And This makes sense when you think about it:

Both job performance and weight-loss are measured by results.

In order to get those results some things have to change, and it’s that changing—the changing of human behavior—that makes it so challenging.

Watkins starts his talk with this example: A performance appraisal at work. The boss comes in and says

Dr. Watkins then points out that sometimes this strategy works

And you get a different result.

But most of the time it doesn’t make much difference.

Or it will only make a difference if the boss stands over the employee cracking the whip making sure they did that.

When I heard him say this, I immediately thought of this meme: 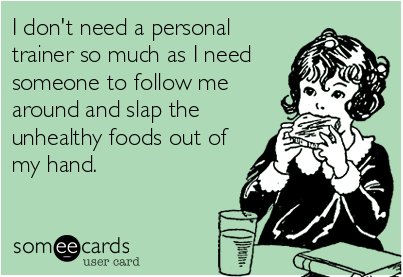 Going back to what Watkins previously said.

We basically give ourselves this same sort of performance appraisal when it comes to our diet and weight-loss.

We say to ourselves… “you’ve been eating more whole foods, super good job there Lindsay, but umm a little less ice cream and Taco Bell, and a little more going to the gym okay?”

Raise your hand if you’ve done this.

In fact, isn’t this the very basis behind every single inspiring weight-loss story we see on the internet?

Someone loses 70 or 100 pounds, which is incredible, and they attribute it to a better diet and more exercise.

So we say YES! “Diet and exercise”

And when that doesn’t work, we think WE have failed.

We fail to consider that “diet and exercise” might not make much of a difference.

Giving up ice cream or going to the gym three times a week doesn’t make much difference.

Even pseudo celebrities like the Joe juice guy, or Kris Carr, who were sick people but then got better with a change to their diet—who said things like “I needed a radical lifestyle change” ...

That’s not untrue, they did change their life, but there was more to it than that.

There has to be, otherwise, why are we failing and falling off?

Starting a new diet or joining a gym is a lot like thinking you’d close more sales if you switched from black ink pens to blue ones.

Or if you bought an iPhone app.

Those things may help in some modest way, but it ultimately comes down to you.

You have to do something different—change your pitch, make more calls, network—whatever.

The app or ink pen isn’t going to close the sale all by itself.

YOU have to perform better.

And that is where the challenge is.

This was Watkins next point. He says,

“Even when people know what to do, sometimes they just don’t do it.”

Isn’t that the harsh truth?

We all intuitively know what healthy is.

Watkins gives the example of an employee who thinks, “I know I should make another 10 sales calls but it’s Friday afternoon… so ‘eh I’m not going to do it. I’ll get it done on Monday.”

It is not enough to just look at the BEHAVIORS, Watkins says.

You’ve got to get to grips with what’s on the INSIDE of individuals.

That’s a theme all season—it’s not WHAT you eat it’s why.

Why do people do what they do?

If you really want to change performance permanently, you have to understand what is driving the behavior.

Surprisingly, what drives your behavior is how you think.

How you think determines what you do.

To figure that out, you have to ask questions, which is a lot more complicated than observing behavior and passing a report card.

I get it: It’s a lot easier to focus on diet, to focus on some element of a food, to focus on the “workouts” you’re not doing, and ignore your thoughts and behaviors.

But if you don’t make an effort to understand and deal with a problem or solution, you won’t get a sustainable change in the results AND any results you initially see won’t last.

You’ll get this up-and-down variance in performance.

WAAAAIT did he just blow my mind up?

Let me play that back in slow-motion:

I know, that was a lot of information. Read it a few times.

“If you don’t get to grips, and ask some more detailed questions, you won’t get a sustainable change in the results AND the results won’t last. You’ll get this variance in performance.”

This also echoes and reiterates what I say at the start of every Slim Team (Meal Mentor’s official behavior modification weight-loss program)...

(If you take nothing else away from me, please take that!)

And you can bet your last dollar that your mindset plays a huge part.

That yes, how you think drives determines behavior…

But how you feel drives your thinking.

How you think is hugely influenced by how you feel.

That means If you want to change what you do, you have to change your thinking.

GOOD NEWS: I’m going to help with that all season.

Most of us (and I’m included in this group) think what they are think, and do what they are do, with zero awareness to their feelings, emotions, and physiology (the “basement of the human system” as Watkins calls it).

To be brilliant everyday, Watkins says you have to not just be aware of your feelings, emotions, and physiology…

You have to get control of your feelings, emotions, and physiology.

Most of us do not have control at this level which is why we aren’t performing the way we want...

Why we aren’t behaving the way we want…

Since as we just learned earlier: performance is driven by behavior!

This idea is difficult to accept.

I even admit I struggled with it AND STILL DO.

This is why we need a great deal of courage to challenge our own beliefs—we feel blame, guilt, and shame when we go against what we believe or accepted.

The more I would fight and try to have my way, the worse the matter got.

I wasted so much time bargaining or in denial—not willing to accept certain realities like oh, hey, it’s not all you can eat! Vegetables don’t have magic calories that don’t count!

Resentment leads to retaliation, often in a form of more self-abuse and suffering.

But I totally, totally get it: I want the simple solution of “diet and exercise” too and not the more complicated and messy solution of asking questions and going inside myself.

But then let’s be real:

How far has measuring your technical performance brought you toward the results you wanted?

Has that report card strategy worked? Has it really worked?

And how successfully do we control ourselves now?

So we CHANGE OUR BEHAVIORS WITHOUT SUFFERING blood, sweat, and tears.

Watkins is right. *That* is the real control.

You can’t fully control your behaviors and be brilliant every day if your feelings, emotions, and physiology are out of control or ignored.

Behavior is a symptom.

If you want to change your behavior, you’ve got to get down to the causes and conditions.

If you’re still not convinced…

Consider this: Even when people have been highly trained on regulating their behavior, they still do not have control over their feelings, emotions, and physiology, which means they don’t have control.

If something upsets their routine…

Did that just blow up your mind?

Now do you understand why the weekends are so hard?

Ultimately all the trained “good” behaviors in the world won’t get you as far as changing your thoughts which drive your behaviors.

I have implemented all kinds of behavior modifications like meal planning or not bringing peanut butter into the house, and/or intermittent fasting, and they definitely help, but they don’t work on their own, or even together, without the mental component.

You need that mental backing and mindset!

That’s why is why I’m spending this entire season on neuroscience and psychology.
In case I lost you back there:

Circling back to those inspiring “before” and “after” people:

It wasn’t simply that they had a radical life change as they claimed.

Yes, they radically changed their life, but it started FIRST with radically changing their mindset. How they thought and how they talked to themselves.

Admittedly, this mental stuff is uncomfortable.

I’m not going to tell you to get comfortable with being uncomfortable, I’m actually going to say the opposite.

Avoiding uncomfortable keeps you from reaching your full potential.

The same can be said for inconvenience.

Choose the inconvenience and discomfort that serves you best.

You have to do things differently to get different results.

It’s amazing how often we forget this simple truth.
So how can you get started right now?

Start seeing yourself as already healthy, even if you still have body fat you want to lose.

This is arguably the single most impactful action you can take towards improving your health and making weight-loss actually happen.

When you change your mindset—those feelings and thoughts—your hand to mouth action will change too.

I’m going to really dig into the science and psychology behind this in the next few episodes but I’ll close with my own anecdotal experience:

Maybe most importantly, I was a whole lot happier when I saw myself as already healthy, and when you’re happy you don’t self-abuse as much.

I’ve never met anyone who said,“you know, I’m sorry I was nice to myself today.”

You can’t take care of a thing you hate.

This was Episode 1 of Season 2.

Leave the guesswork and science to me.

Watkins made another great point in his lecture.

He said that when he coached CEOs, no matter how much money they paid him, no matter the fact they gave up hours and hours of their time to him, time that they could be doing a million other things...

But if they think Watkins is an idiot, or that what he is saying is rubbish, they won’t do it.

I can’t make you follow my advice, I just hope you will. Not for me, for you.
I also want to caution against a new growing threat I see in the science-minded community: It is great to do research and learn for yourself, but “learning” makes us feel like we’re making progress when we really aren’t. Don’t use learning to delay DOING or changing.

Episode 8: Midseason update! Up next: Neuroplasticity, Metacognition, and Homeostasis

These next episodes will explain why, explain addiction, and tell you HOW to change and start taking action immediately.

Episode 2: Should You Count Calories?

Not all calories are created equal! Listen as I discuss what you really need to know about calories and if counting them will help with your weight loss goals.

Episode 9: The Best Time to Eat, Anabolic/Catabolic Hunger and the Lentil Effect

What hours of the day should you be eating? Listen as I discuss the problem with today's views on breakfast and why you should know the two stages of digestion.