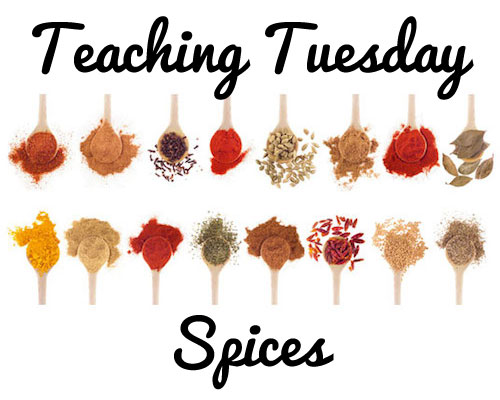 Things are getting spice-y for this week's Teaching Tuesday!

Spices was one of the most requested topic for this series, so I asked my Dad (Papa Herbivore) and Mom (Mama Herbivore) to share their knowledge on spices.

After reading their informational post, I'm sure you'll be well seasoned ;)

Papa Herbivore back again with input from Mama Herbivore.

Most of you have heard our story of going plant-based almost 2 1/2 years ago (Editorial note: you can read their Herbie of the Week story here (part 1) and here (part 2)), thanks to the loving support of our daughter, Lindsay.

Although it was a very different journey in the beginning, we also had an equally different transition with the use and taste of spices. Hopefully, some of you will be able to relate and I hope to give a few tips along the way from our point of view.

Prior to us going plant-based, Mama Herbivore was a very good cook, with Italian & Polish heritages. But she wasn't brought up, nor was I, with the use of many spices in cooking, and thus we did not highly season our food in our 40+ years of our marriage. Our spice cabinet, (if you could call it that) consisted mainly of: Garlic & onion salt, oregano, parsley flakes, italian seasoning, paprika, poultry seasoning, chilli powder, and red pepper flakes. We may have had a few others but never used them.

Now fast forward to Jan. 2012 when we went plant-based. Lindsay had just published her second cookbook, Everyday Happy Herbivore. Upon reviewing recipes from both books, we were astonished that every one included a spice or two we didn't have, so I went through the two books, jotted down the missing spice, and if there was a repeat, would check it, and ultimately buy it.

Then came the first couple of recipes. I can't remember what it was, but we both commented: "You mean you put all those spices together in one dish?" The answer of course was, yes you do, and that's what gives all of Lindsay's recipes their delicious flavors. 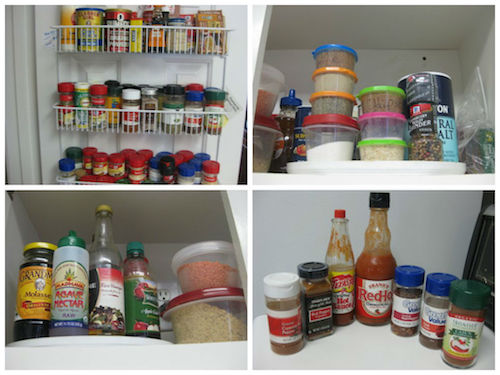 Now on to taste. Now that we have experienced the "joy of seasonings", enriched from Happy Herbivore recipes, if it's not highly seasoned from say a restaurant or made by someone else, we think it's bland.

One big transition we made was with what I will label, "Hot Spices", for use on "South of the Border" dishes. We make Lindsay's tacos, taco soup, fiesta bake, enchiladas, mexican chowder etc. quite frquently. I personally never ate hot spiced foods. Mama Herbivore would occasionally use red pepper flakes on a few things. Now in addition to the other hot spices, we use the cayenne shaker quite freely. But another tip: before adding cayenne, put all the other spices in first, taste, add a few shakes, taste and repeat until right for your taste. It's better to shake 3 or 4 times than to ruin your meal to your taste. We also found that even if a recipe calls for a measurement (i.e. 1/4 tsp etc. of cayenne), only shake as I mentioned.

I mentioned about tweaking recipes, here are a few other examples of reducing in one recipe and adding and increasing in another. Two of our very favorites are spicy sausage and "tuna" salad. With the sausage we always double the batch size, but do not double the hot spices (i.e. red pepper flakes, cayenne, chilli powder and hot sauce). It comes out just right for our taste. "Tuna" salad was always one of our favorite dishes, so it took a lot of trial tweaking to get it as close to the real deal. I probably put 4 times or more kelp, add multiple shakes of Old Bay seasoning, add onion powder, few shakes of garlic powder and increase the onion flakes. I made a batch for Lindsay when I was with her over New Year's and she commented, "Boy! You really like the kelp seasoning." Again tweak to your taste. 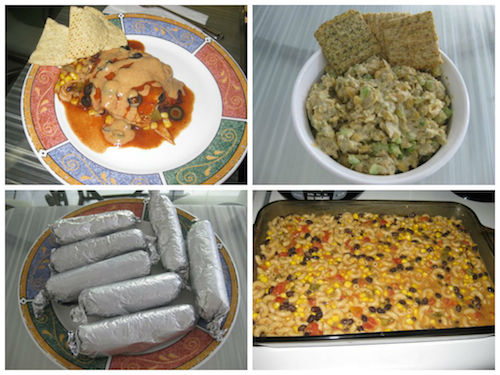 Another spice which we never heard of prior to going plant-based, let alone use it, is nutritional yeast. It's used in quite a lot of Lindsay's recipes and I always put extra in as I love the resulting taste. (I'm usually the sous chef and Mama doesn't see how much I put in, but she loves the taste.)

Let me touch briefly on Asian foods (Mama's fav). Many of Lindsay's recipes call for Asian Chilli sauce. We went through quite a few before we found the ultimate at Whole Foods made by the Ginger People called "Sweet Ginger Chilli". Mama probably uses it as much as Lindsay uses mustard. We also now love curry dishes and Indian dishes.

Just a few other tips before I close. If you have a tendency to slightly overflow measurements of spices as I do, be very careful with liquid smoke and various extracts. They are potent! Another tip, again for our taste, is that everytime I use not chick'n or not beef bouillon, I always add 1/2 bouillon more without any more water on top of the prescribed amount. Again, to our taste.

We are so thankful Lindsay, via her recipes, has introduced us to a wonderful world of spicy, seasoned foods. Our only regret is that we wish we were as knowledgable as she is in knowing the taste and effect of most spices. We would love to be able to say, "Let's add some of this or that", if we just really knew.

We would both love to hear any or all responses on tips you have with regard to spices.

In closing, I will leave a somewhat related thought for the day: "Variety's the very spice of life, that gives it all its flavor." -- William Cowper