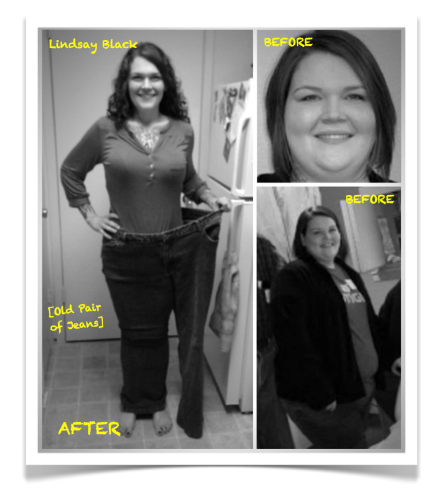 Prepare to be BLOWN AWAY (yes, all caps necessary!) by our Herbie of the Week's *incredible* story and transformation. Lindsay B. and I met a little less than a year ago (December 2012) via email, when Lindsay was still working toward her goal. 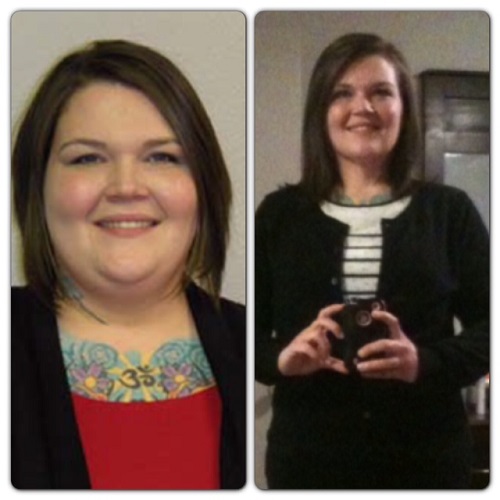 (Answer: The Cheddar Cheesy Sauce in HHC! or the Everyday Cheese Sauce in EHH).

Her accomplishments were already so crazy impressive that I begged her to let me share her story as part of the Herbie of the Week Series.

Extremely transparent from the moment she started her journey, Lindsay was more than happy to share it with us...with one catch: she had another goal she wanted to hit first.

"Hey Lindsay! I'm so close. 9 lbs away. I ended up hurting my ribs last week so I've got to take a break from exercise for a few weeks. It's killing me, I love exercising. I'm hoping for them to heal quickly so I can get back to boxing! This is my most current photo, well here are a couple! The pants I'm in in the second photo were the pants I was wearing when I joined Weight Watchers. I fit comfortably in one leg!" (June 2013) 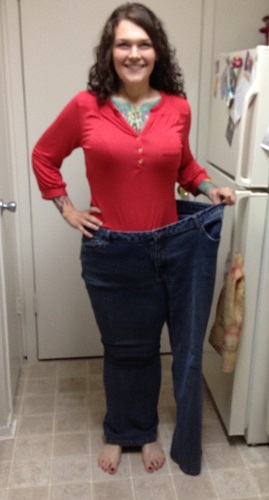 Words can't express my delight and excitement when an email bubbled up in my inbox a month later (July 2013) with the subject "I've hit my goal".

You are an inspiration, Lindsay!!

A year and a half ago, I decided that it was time to make a change. I thought that this change would be only physical, but it became so much more. I grew as a person, I learned who I was, I learned the true value of hard work, dedication and determination. I also learned who I was notand who I never should have settled into being.

I will never forget the shame I felt walking into Weight Watchers that Friday evening. I went on a Friday night because I knew there wasn't a meeting and there weren't going to be many people around. The number on the scale was between me and the lady behind the counter.

When I got on that scale and it read 279.8, it took my breath away. How had I let myself go so far? Over the next week, I followed a plan thinking that it would never work — but it did, and I lost 6 lbs.

A couple of weeks later I started exercising. Nothing crazy, I was doing yoga for 20-40 minutes and cardio in 10 minute increments, but I remember how hard I thought that was. 10 minutes, y'all...ha!

Then there was the night that I got in a fight with a bag of M&M's and after winning, I realized the power I had. I knew in that moment that I was going to win the battle.

And then came the day from hell at work. I had the worst day possible. A day like that would have sent me straight to Raising Cane's in the past, but my immediate thought was, damn it, I just need yoga. I was like, who said that?! What?

I had changed my behavior!Behavior that had been ingrained in me since childhood. I had learned thatmy stress was much better controlled with exercise than food. I grew a little that day. 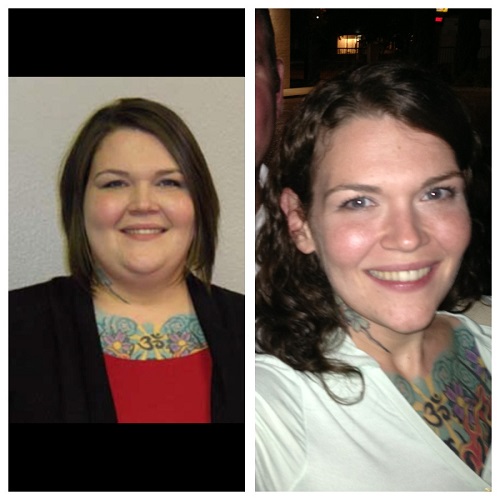 Over the following months, I kept eating right and exercising more and challenging myself with different types of exercise. I was shedding weight fast, building muscle, gaining stamina andbecoming much more mentally fit as well. I was really coming out of my shell and ripping down the walls I had built around myself. Growing more and more each week.

Then came the layoff. I was terrified. I knew I would find a job, but I was terrified of getting bored, eating and destroying what I had worked so hard for. Hell no! I spent time exercising with friends. I found new activities and I took some time to simply relax. I learned with all of that that exercising alone and/or at home was boring and I was not being challenged. So I knew the time to join a gym had come. Luckily, I only had to try one: La Boxing.

(*Here's a video Lindsay did for La Boxing when she was down 137 lbs. You can also watch it on YouTube.)

I was welcomed openly by trainers and members and was challenged in a way that I never imagined I could be both physically and mentally. I knew that this was the place for me. The members are wonderful and the trainers and staff I simply cannot praise enough. I am grateful to have found something so extraordinary within what appears to be nothing more than the walls of an ordinary gym. New friends, support, challenges, big brothers. I am one lucky girl.

One and a half years, 18 short months later, and I'm at the end of the greatest part of the journey.

This has been the most challenging part: Coming to the place I have worked so hard to finally arrive at.

My initial goal was 140 lbs., but I felt unsatisfied when I reached it. I was unsatisfied because I wanted it to look a little different. I went to the doctor to get her opinion on going lower and she said I don't have any more fat to lose. I was so upset. I wanted her to say that I could go for 10 more pounds. It's been a few days and I am working toward being fine with the way I am in this moment because I know it will get better over time. 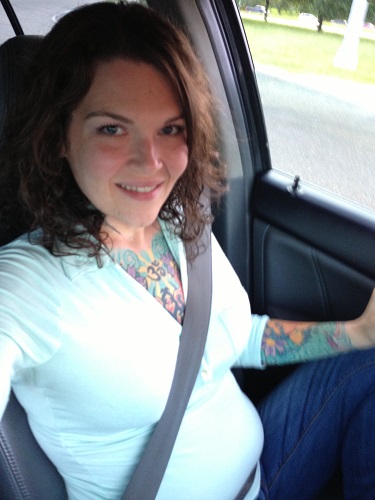 So here we are. I've made it to my goal!

I've lost more than 50% of myself, 141 pounds.My body has decided that my weight range is between 135-140, but more than a number on a scale, it's that I'm healthy and even on days when I don't always think it,I am whole. I'm not going to have that heart attack by the time I was 35 that I was so sure of. I can be active and enjoy the fun things in life. I don't ache upon waking or run out of breath doing simple tasks.

I am grateful to have had the opportunity to turn my life aroundand I am thankful for all of those who helped me, lifted me up, loved me (even when I didn't deserve it or when I didn't love myself) and empowered me along the way!

LINDSAY, YOU ARE AWESOME. THAT IS ALL.