Shelf-Life of Spices and Herbs

We all know I'm a short-cut cook and I love my spices. Ahh how much easier (not to mention tasty!) spices make my life...

Recently I was having a conversation with a friend -- she'd said she added a whopping 1 tbsp of cayenne to something and it still wasn't spicy... what gives?

My eyes started tearing up at the thought! Cayenne is so strong! How could my friend possibly stand all that heat and say it's bland?!

Then a light clicked on. "Jenny, how long have you had that cayenne?" I asked. There was a brief silence and then she replied "mmm about 2 years maybe.... why does it go bad?"

How often should you replace your spices?!

The general recommendation is 6 months, but I find if you store your spices correctly (in am air tight container in a cool, dry place) they can last much, much longer.

Whole spices (i.e. cinnamon sticks or peppercorns) last for years on end. Ground spices (i.e. ground ginger or ground cumin) can last a good 2 years, maybe longer. Dried herbs tap out pretty early, unfortunately, but some of the more potent ones will make it a full year.

So how can you tell if your spices are still up to snuff?

For one, when you sniff them, the smell will be really strong. With herbs, you want to go one step further and rub them between your fingers. If the smell still isn't strong,  they've probably lost their luster. (Sometimes herbs don't smell in the jar, but when rubbed they smell -- so they're still good to go. The color might also fade, but that doesn't automatically mean it's time for a new spice).

and since I know this question will bubble up... my favorite brand, without question, is Badia. 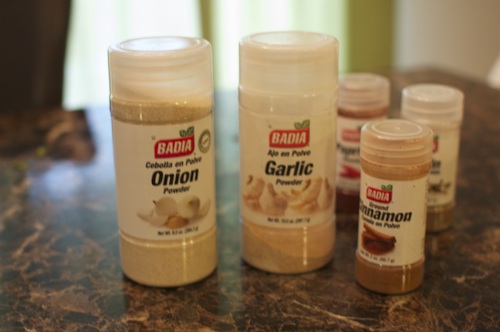 This brand is inexpensive, you can find them at target and their spices are really, really strong and flavorful.

I'm convinced that Badia cinnamon is a gift from the Gods. You have not lived until you've had their cinnamon -- I mean it. (Buy it!) Here's how obsessed I am with the cinnamon: I take it with me when I travel. I gave bottles of it away at Christmas last year. It was humiliating but everyone thanked me later! :-)

I'm also a little crazy about Badia curry which I slip into anything that I think needs a little something else. I pretty much buy every spice Badia makes. They don't make ALL the spices that I use, but they do make most.

One last thing about spices! I love granulated garlic powder and onion powder -- yes, but they're not to be confused with the powdery kind. I like the kind thats granulated like salt and not flour-like. Sometimes they're both called "powder" or the flour kind is "California style" just to make our lives more confusing!

My awesome friend Tess snapped this picture to show the differences -- I like the one on the far right thats golden in color. 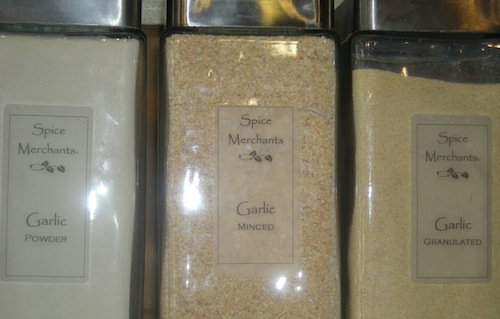