"Chicken" Alfredo? A tale of when bloopers go right

I'm usually the resident cook in our house. It's not that Scott doesn't want to cook, and for the first year we lived together, he actually did way more cooking than me, but I'm always wanting to try out new ideas (which is both a blessing and a curse). So I guess, there just really isn't an opportunity for him to get in on the action!

However, since I'm about to abandon him for three weeks to go on a mini-mini book tour and take part in other shenanigans back home in NYC, I've been having him chip in a little more than lately.

Call my crazy, I just want to make sure he can feed himself (and our pugs--they get home cooked meals) in my absence. Ridiculous, I know. He was obviously capable of feeding himself before we met...I think.

Anyway, last night Scott said he was "in the mood for HH's creamy Alfredo" so I handed him the cookbook (p. 163) and told him to have fun =) 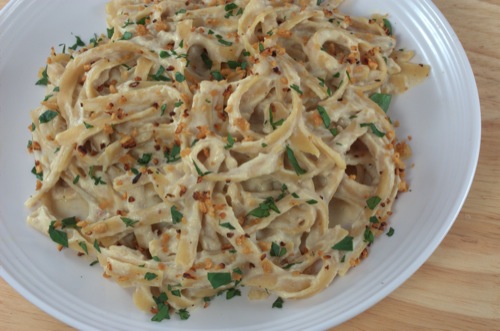 [picture from the cookbook]

He made it with brown rice noodles, which were the biggest, fattest "fettuccine" noodles I've ever seen, but they actually worked really well here. However... he had a blooper.

You see, earlier this week I'd made a fresh batch of my no-chicken brown powder (p. 281) to take with me to NYC and I'd mistakenly left it out on the counter. Scott thought it was our stash of (plain) nutritional yeast and used in instead of nutritional yeast in the recipe. 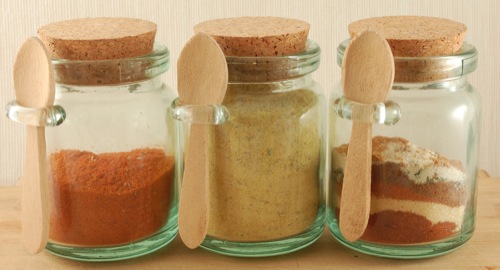 [middle one, pictured with other homemade spices from the cookbook]

As we sat down, I noticed little green flecks in the pasta, and that my "Alfredo" was a nice gold color rather than white... so I inquired, "Did you, ugh, do anything *special* to the recipe?" 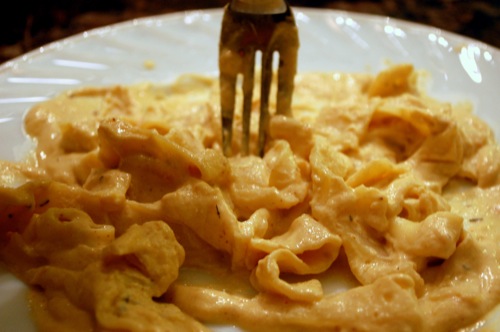 Scott, head bent down, pasta being shoveled into the mouth rapidly. "No, I followed the directions."

I leaned down to smell it (I'm sure I'd offended Scott by this point, but I was convinced he did something!)

"It smells chicken-y. Are you sure you didn't put something in it?"

Just then my gaze shifted towards the kitchen counter and noticed a big dent in my no-chicken broth powder... with a measuring cup sitting next to it.

"Did you use the nutritional yeast on the counter or in the bag?"

Aha! There was something different about it (I wanted to high five myself for my sleuth skills) but then, with this realization, I got hesitant to actually try my dinner.

I mean, do I really want a chicken flavor in my Alfredo?

I tried it anyway and surprise! It was delicious! It didn't really taste like an "Alfredo" anymore, but the flavors were really complex and different. It was like a like a gooey, and rich cheese-cream sauce.

Don't you just love it when mistakes go right?