I went to college in Charleston, South Carolina -- which is Scott's hometown (and where we met).

I am a "yankee" by birth and personality-- I am a fast-talker, crafty and loud (especially when I am either excited or angry). I was also raised in a progressive lifestyle both at home in within my community. My parents weren't liberal hippies (as much as I'd have liked them to be) but they have always prided themselves of being "hip" and "socially forward."

So, moving to such a slow-moving and conservative area that had an old world era to it, was quite the change for me. I was schooled quickly and sharply on the ways of the South and found happiness only when I let go, gave in, and stopped trying to make the South something it was not.

It was then that I saw the South -- particularly the Low Country, for what it really was. I focused on the good parts -- like the rich and unique cuisine that was born there and remained despite America's food culture taking on a different turn everywhere else. Recently, I went back to Charleston and I found myself inspired by the food -- perhaps more than ever, and wondered why I didn't write more recipes that had this special flare.

Then I remembered, oh wait! I have! My first recreation was my Vegan She Crab Soup which I shared here on the blog and I followed that with six Low Country classics in my cookbook -- this recipe being one of them! 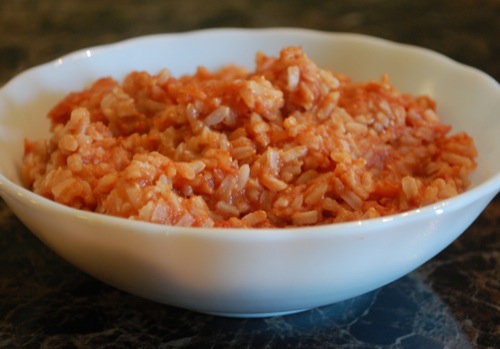 Red Rice -- sometimes called Savannah Red Rice, but usually Charleston Red Rice, is a staple side dish in the Low Country and for good reason. It's impossibly easy to make --- it's made from leftover rice (Southern food is very thrifty) and it goes with just about everything.