The first time I tried egg salad was about five years ago, when I was a vegetarian. I'd forgotten my lunch at home that day, and an egg salad sandwich was the only "option" at the grab-n-go deli by my internship. Honestly, it looked like a sloppy yellow mess and...well, I didn't know how I felt about it. 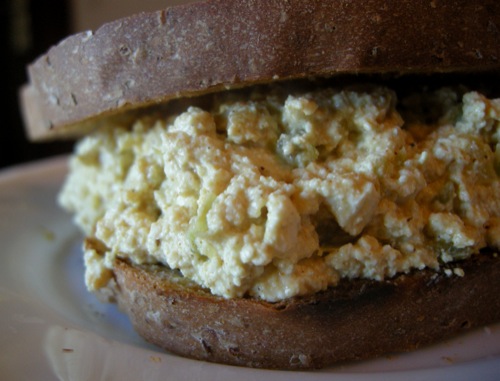 For starters, I wasn't one for mayonaise (to be honest, mayo still gives me the heebie jeebies) and also wasn't a fan of eggs. In other words, an egg salad just wasn't anything I ever desired to try. Still, my stomach was rumbling so I bought one, hoping for the best.

One bite into that sandwich and I unleashed what would become a rather intense love affair with egg salad. I ate it on salads, slipped into a warm whole wheat pita or my fave--squishing out between two slices of pumpernickel bread.

This affair continued until I went vegan a few months later. Although I'd sought out replica recipes online immediately, one glance at them made me realize they'd never taste the same... so I filed egg salad under "unhealthy foods I now avoid" in my brain and moved on.

And really, I'd forgotten about egg salad sandwiches until last week when a friend emailed to say the deli had closed down. Although I haven't eaten there in years (and since they didn't offer anything vegan, I couldn't patronage it anyway), I still find it sad when long-standing, independently-owned establishments go under.

After reading the email, however, I started thinking about all those egg salad sandwiches---and then I wanted a vegan one. Not willing to try any old recipe--I sent a message out to twitter, asking if anyone knew of a good vegan egg salad sandwich recipe. Several people replied that if I found one, please share it--which left me feeling dismal about finding a great recipe...

I liked the simplicity of her recipe and decided to use it as a template. The first time I made this eggless salad, I kept adding a little of this--a lot of that--tasting along the way until I had what I thought was the right taste. I served it to Scott & he went crazy for it--eating three and a half total sandwiches!

I then scratched out what I thought I'd done on a piece of paper and waited a few days to test out my "recipe." The second salad was not the same as the first--but it was better--- as though my mind somehow knew what was right and remembered it that way. 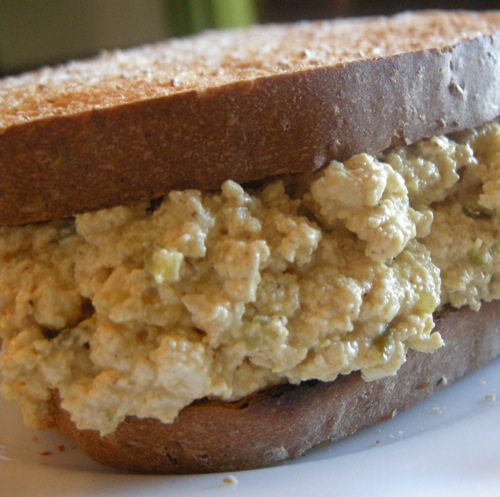 Still, even with myrecipe--you'll still need to do some tasting as you go, especially because we all have our own preferences when it comes to egg salad. For instance, Scott really likes the tang of dill, so he's generous with the relish, where I like it as a slight flavor accent. 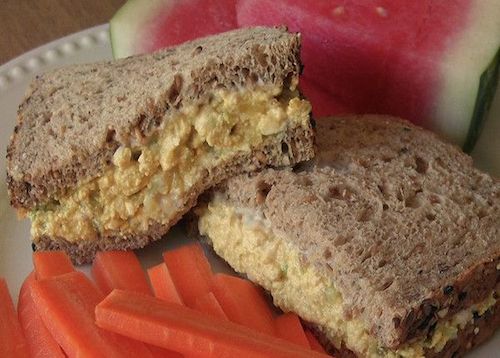 My long search for the perfect vegan "egg" salad is over! This tofu eggless salad tastes just like the original, only it's fat-free and a whole lot healthier. Black salt is the secret ingredient here. This has quickly became a favorite in our household.

If using firm tofu, press for at least 20 minutes. Give exrta-firm tofu a good squeeze before starting. Crumble tofu into a large mixing bowl. Add remaining ingredients and stir until well combined. Let set for a few minutes (this allows the flavor to merge but also enhances the yellow coloring). Stir again. Taste, adjusting spices as necessary. Add black pepper to taste and serve.

Chef's Note: I use the fat-free vegan mayo from The Happy Herbivore Cookbook.