Last weekend Scott & I went to an Oktoberfest-Luau. It was part Oktoberfest to celebrate the hosts' German heritage, but also part Luau because they left for a 10-day vacation in Hawaii yesterday. 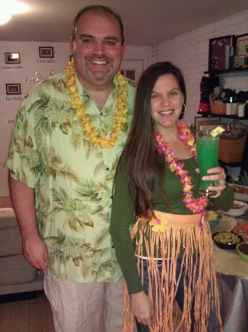 A few days before the party, I found out that one of the German guests had recently gone meatless (woohoo!)so I thought it would be fun to bring vegan weiner schnitzel and vegan German potato salad to the party... 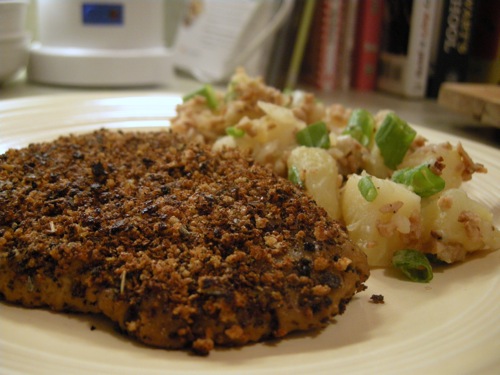 Only, I'd never had either food before! Whoops! So, I started googling about weiner schnizel's thinking if I knew how they were made traditionally, I could figure out a vegan version. Same was true for the potato salad and I learned some rather interesting information along the way!

For starters, weiner schnitzels come from Austria, not Germany. (My bad!). It also turns out that a weiner schnitzel is simply a regular ol' schnitzel (meat cutlet without bones) that just happens to be traditionally eaten in Wien (Vienna), Austria, hence the name. Kind of like how Bolognese sauce is named for Bologna, Italy...

Anyway, I decided to make veganitzel's (you like that name, don't you?) with seitan but still incorporating the traditional flavors and methods used with weiner schnitzels.

In other words, I seasoned and pounded the snot out of my seitan first. :-) 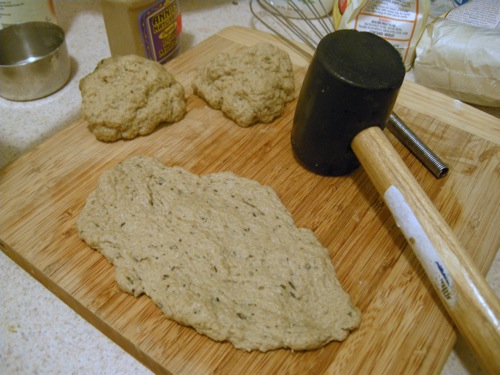 After pounding out the cutlets (I used the Seitan Pot Roast recipe from my cookbook to make the seitan cutlets).  I boiled them, and once they were done, breaded them with homemade whole wheat bread crumbs and herbs. 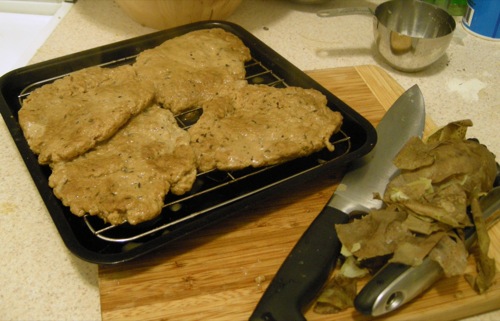 (Here they are fully cooked -- looks like meat, no?)

I then pan-fried them (without oil) but I think next time I'll bake them instead.... anyway, voila! vegan weiner schnitzel... I mean, veganitzel!

For the potato salad, I added a few elements (like mustard and nutritional yeast) that I knew would enhance the dish, but not make it less authentic. All the recipes I found online were fairly similar so I figured there wasn't much room for interpretation anyway.

Also, since German potato salad is traditionally made with bacon, I used the Bacon Bits recipe from my cookbook. However, any commercial bacon bit will do. (Interesting FYI: Most "bacon bits" at the supermarket are vegan - true story!).

I also brought a double batch of HH's Hawaiian BBQ: Teriyaki Chickpeas with Pineapple Salsa to the party -- which was a HUGE hit with the entire crowd. The Germans also gave my veganitzel and potato salad two thumbs up!!