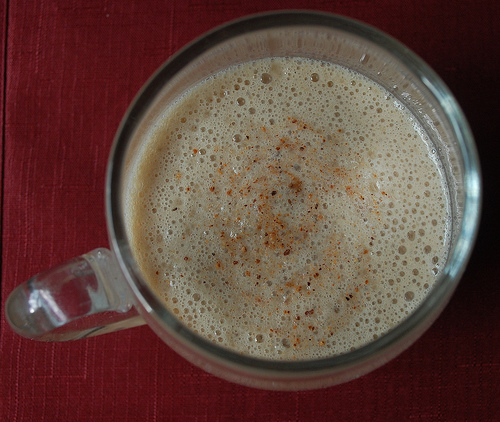 I remember loving eggnog as a kid until I learned it did in fact include eggs and it wasn't just called eggnog because it was yellow. I was so grossed out (I was drinking eggs?!) that I vowed to never touch the stuff again. and I didn't... until I went vegan and found soy nog at the store. I've tried all the vegan nogs around - Silk's Soy Nog, Rice Dream's Rice Nog and a few other brand in between. They're all pretty good and get the job done, but what I don't like is how much fat and sugar is in them. They're also really high in calories which makes them more like a dessert than a joyful holiday drink.

Having made vegan eggnog parfaits for Vegetarian Times (my recipe is on pg. 48 of the current issue), I knew making anything eggnog-flavored from scratch was possible so I started wondering if I could make a fat-free vegan eggnog. Recycling my spices from the parfaits helped me nail the flavor, but what was I going to do about the yellow color? I decided to throw in a frozen banana and the result? perfection. My eggnog had a lovely yellow hue and the banana added just enough natural sweetness that I didn't need to add any additional sugar! I don't think eggnog has ever been so skinny! 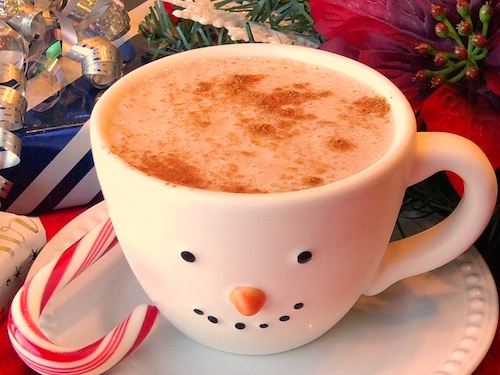 A healthy version of the quintessential holiday drink! Now you can really be merry!

Combine plant-based milk (we recommend fat-free vanilla soy milk, but any vanilla flavored plant-based milk will work), banana, a light dash of nutmeg (about 1/8 tsp) and a tiny little bit of cloves in a blender and blend until smooth and creamy. Garnish with ground cinnamon and serve.