If you loved my traditional almost fat-free cheesecake recipe, you're in for a real treat with this variation! For starters, I used chocolate gram crackers for the crust. I pulsed them in my food processor until they were a consistency similar to bread crumbs. Then mixed the gram crack crumbs with about 8 tbsp of unsweetened applesauce. I poured the batter into my greased pie pan and baked it at 350F for 8 minutes. It smelled so heavenly. 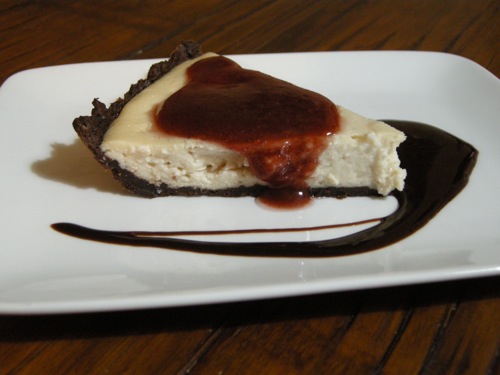 As for the cheesecake itself, I followed the original recipe, except this time I upped the almond extract to 1 tsp because Scott's really into almond-flavoring. Mmmm Mmmmm. 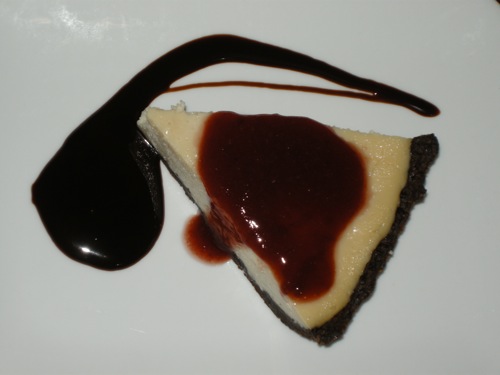 For the cherry topping, I cheated! I whizzed a small jar of organic cherry jam (sweetened without sugar) and a little water in my little food processor (its similar to a magic bullet) until it had a consistency similar to syrup. (Speaking of which, I served it with a little vegan chocolate syrup too!) 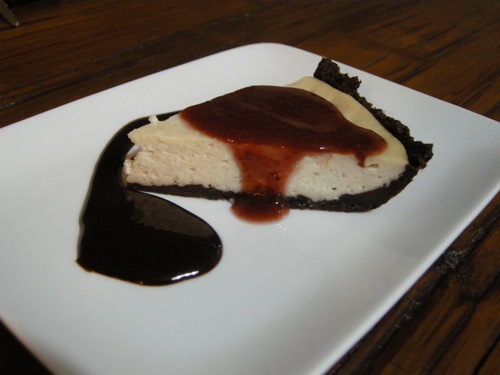 Like the original, this cheesecake is almost fat-free and is so unbelievably good. My parents and omni friend Blyth all gave it a two thumbs up and Scott and I... well, we're thankful for the leftovers to say the least! Now pardon me, I have cheesecake waiting to be eaten! Nom. Nom. Nom. 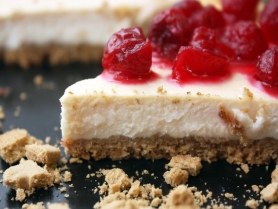 Vegan cheesecake became a Christmas tradition in my family after my parents went plant-based. This recipe is more decadent than my other recipes and uses ingredients I normally wouldn't...except during the holidays! You'll also need my Graham Cracker Crust recipe.

Once fully incorporated, pour into prepared pie crust and smooth top with a spatula. Bake 40-45 minutes. Remove from oven and place somewhere away from heat. Allow to cool to room temperature (about 2-3 hours). Chill overnight or for at least 10 hours before serving.

For a topping, let frozen strawberries defrost (in a bowl or in their bag). Serve over the cheesecake.