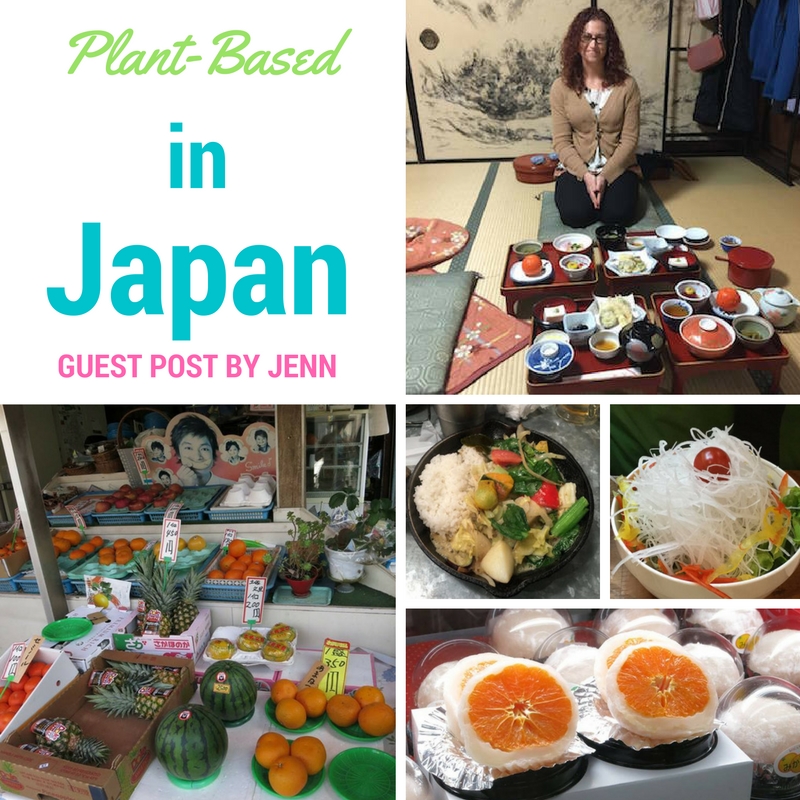 Back in April, Meal Mentor member Jenn took time out from her honeymoon in Japan to post pictures in the VIP Facebook group. (She's also a former Herbie of the Week! Read her story here.)

As you can see from the comments, the other members LOVED seeing all the plant-based and vegan offerings she found: 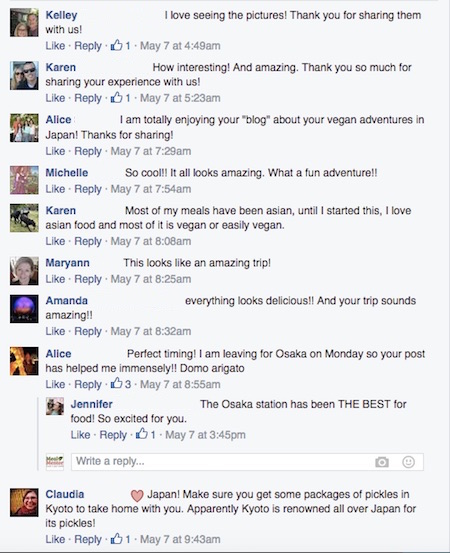 I immediately reached out to Jenn and asked if she would be interested in doing a guest post for Happy Herbivore once she returned to the States -- and I'm so glad she said yes!

I'll let Jenn take it away! 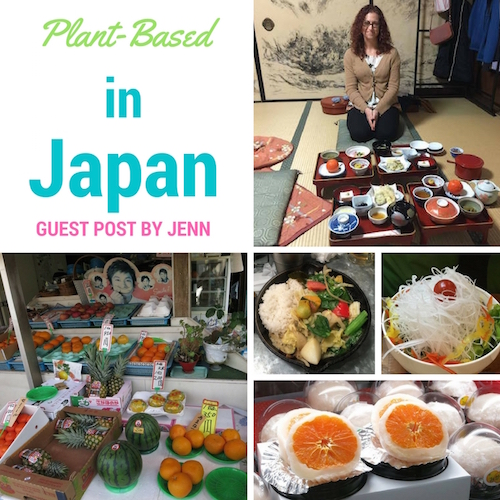 I’m a 35 year old environmental scientist living with my husband, Alex (who is also WFPB) in San Diego, CA. I’ve been plant-based for over four years, and in that time I’ve been able to drop almost 80 pounds. When I met Alex, he transitioned from SAD to WFPB and was able to lose a significant chunk of weight, as well as resolve other health issues. Happily, in April 2016, we were married. A week later, we were on a plane to Japan on a three-week honeymoon adventure! WHEE!

Since we had spent the majority of our time planning our wedding, we did not have time to plan an itinerary, let alone think about food. I don’t even think we called ahead to get a vegetarian option for the plane! We learned very little Japanese before going, though we downloaded a few apps, listened to podcasts that taught "survival phrases", and used Google Translate liberally (though often with imperfect and humorous results). Surprisingly, there were very few online resources for being vegan in Japan, and most folks I talked to told me I was "…just going to have to eat fish…", as supposedly fish is in everything there. This was decidedly not our experience. The night before we left, I panicked and placed four baked potatoes along with a few oil-free prepackaged snacks from Whole Foods in my carry-on. 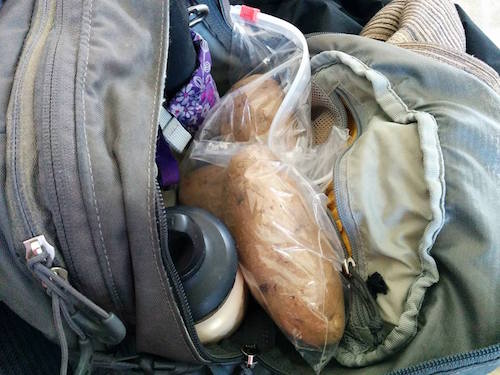 7-11s, Lawson, and Family Mart are prominent convenience store chains in Japan, and they were a wealth of quick, cheap, easy vegan and WFPB options for us. Lawson was our preferred chain since their labels were in English in addition to Japanese. Our favorite foods were onigiri: "rice pockets" (sushi rice with a flavor of something inside). Our favorite flavors included seaweed, pickled plum, and red beans and rice. Usually for breakfast we would have one of those each, along with some dried fruit or Fuji apples. Fuji apples taste like real food in Japan - unlike the wet mushy cardboard that they resemble in the US. Another convenience store favorite was yuba: soy milk curds usually shaped as pockets and stuffed with sushi rice. 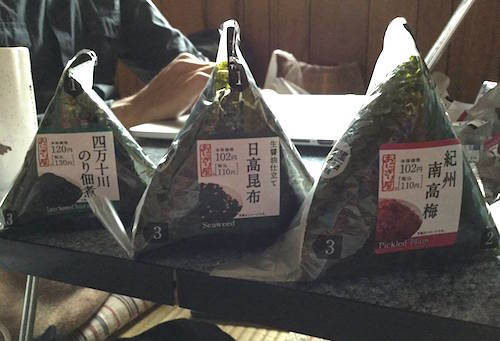 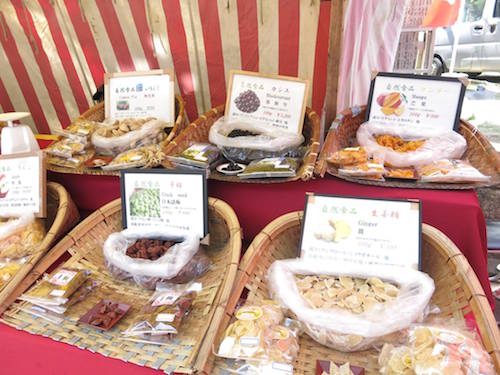 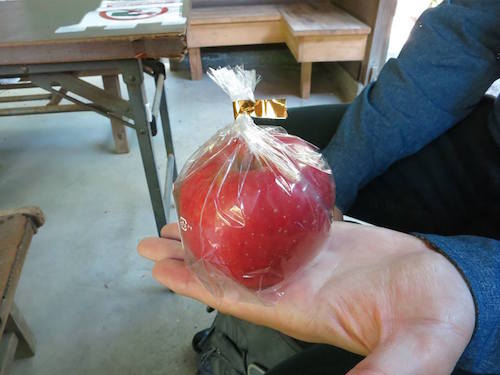 Staying oil-free is totally doable when you eat out of the grocery store, purchasing pickled veggies and cooked greens out of the prepped "deli" section. Eating packed lunches also has the added bonus of not having to stop for lunch which takes up so much valuable sightseeing time.

At Osaka-Shin Station, the main transportation hub of the city, we found a curry restaurant called, Camp Curry. They had "fully loaded veggie curry" in Indian and Green Thai varieties. It was so amazing we went back for dinner. We could also usually find veggie bento boxes with just veggies and rice (that may or may not have a small fish or egg piece we could easily pick out). 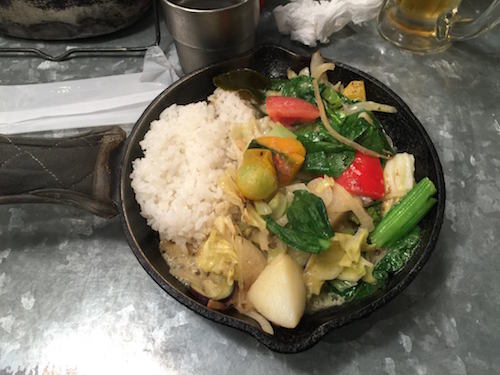 One time on the high speed bullet train we found an actual advertised vegan option for the bento boxes (ekiben). And for dessert, there was always traditional mochi (sweet rice flour wrapped around sweet bean paste) - omg real mochi is the best! We even found it with real fruit inside. 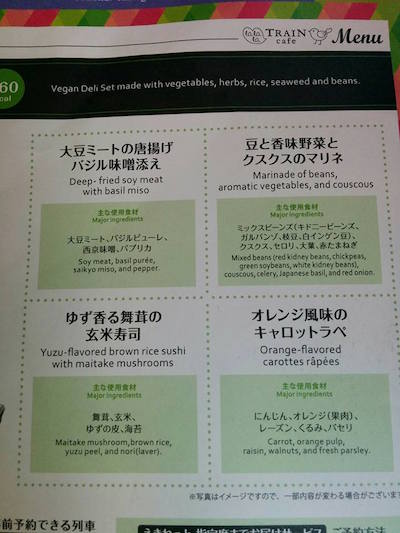 Because we were in Japan over Golden Week, a week containing Japan’s three biggest national holidays, there were throngs of domestic tourists off work throughout the country. While some might consider this a pain, we thought it was pretty cool to be out and about with the Japanese enjoying their beautiful country. An added bonus of this was that street food vendors were out in full force to cater to the crowds at larger tourist attractions (like shrines, temples, and museums). We enjoyed teriyaki rice balls, grilled bamboo, bbq tofu, and a variety of fresh cut fruits on a stick. There were also stands with dried fruits and nuts, although in Japan fruits and nuts are crazy expensive compared to the cheap, delicious, plentiful veggies available everywhere.

Eating out at dinner proved slightly greasier and super salty! This is a salt-loving culture, that's for sure. We were very appreciative of the Japanese convention of plastic food models displayed in a window or table outside of the restaurant, as it gave us a general idea of what the restaurant served, even if there was no English menu. A lot of places had and advertised availability of English menus.

Japanese pubs, izakaya, were excellent places to eat for a couple of reasons: it’s cheap, there’s beer, and there’s a heavier emphasis on veggies and salad than at other restaurants. It was relatively easy to get a salad topped with silken tofu at any izakaya we went to. 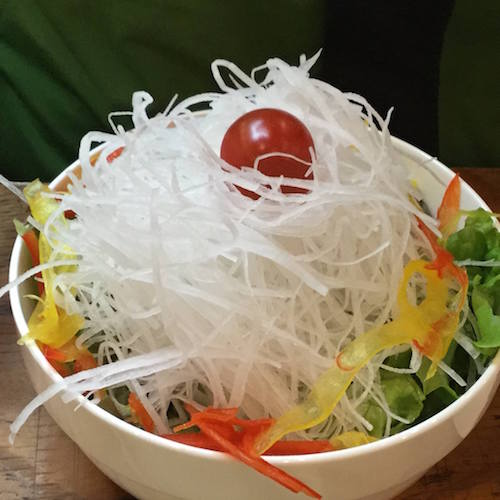 On one such trip, a friendly local taught us to order a table top charcoal grill (shichirin) with a side-order of veggies and potatoes that we cooked ourselves tableside. Japanese noodle dishes, soba or udon dishes, were also good options if we could specifically find ones that were advertised as vegetarian, as the broths of these dishes usually have fish. Then of course, there was always tempura, Japanese-style fried assorted veggies. 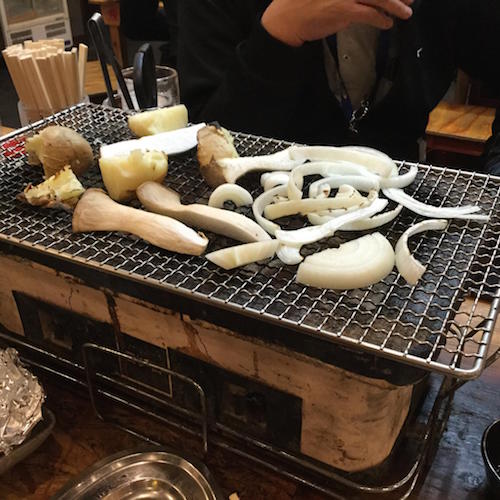 In Japan, Italian restaurants are popular. The few advertised vegetarian restaurants we came across were Italian style restaurants with pasta marinara, pesto, primavera, etc. These tended to be very heavy on the olive oil though so we didn’t patronize them much.

Restaurants that catered to Buddhists were good too because they tended to have vegetarian options (as strict Buddhists at least avoid meat; many avoid all animal products). Some of the best food we had came from our stay at a Buddhist monastery in Koyasan, a small mountaintop village about two and a half hours outside Kyoto. Surprisingly, we had trouble finding strictly veggie sushi; most of the veggie sushi we saw was paired with egg or mystery meat bits. 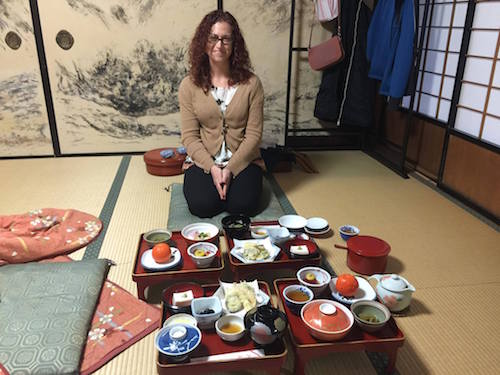 Dinner at the Buddhist monastery

One of our favorite experiences was meeting a French expat named Phillipe who ran a bar in Kyoto. While we didn’t eat at his establishment, he is a vegetarian, and talked for hours about food. He even let me peruse his old French vegetarian cookbooks!

The Japanese do not have a word for vegan, and therefore no way to really conceptualize, what a vegan is- let alone WFPB! If you think we struggle to describe our way of eating to those who speak English, this was that level of misunderstanding 100x. I described what I didn’t eat to well-meaning locals who then recommended I check out the fish market in the morning, or check out the ononomiyaki (Japanese omelet) restaurant down the street. Not only is vegan not really a concept there, but vegetarianism is usually considered to include the consumption of dairy, eggs, and fish. So even if something is advertised as vegetarian, you have to be on high alert to catch fish/fish sauce, and sneaky dairy.

While the Japanese enjoy veggies, we found it difficult to find prepared dishes with veggies in "regular" or quick service restaurants that didn’t have meat or meat-stock in them. It is not uncommon, for example, to serve tofu and/or veggies in a pork curry sauce as tofu is a common food that omnivores eat regularly. And sometimes, because the Japanese enjoy such stylized food, it was challenging to figure out if the diced pinkish thing on your soba was meat or a dyed, finely diced veggie. We had an inside running gag about "secret squid powder" potentially lurking in everything we ate.

The other problem I faced, coming from strictly following the Meal Mentor meal plans, was a lack of fiber: white rice, refined flour noodles, fried foods, salt, and caffeine, combined with more drinking than normal, fewer veggies, and smaller portions meant that I was constipated almost the whole trip! I was amazed at how quickly my system, um, came back online once I was home!

Here are my ProTips™:

Thank you so much Jenn for sharing your amazing trip with us!

Want more tips on vegan and plant-based dining in Asia? Read my experiencehere.