Herbie of the Week: Deborah (After 25 years of managing restaurants that serve meat, she made the connection between animals and what was she was serving) 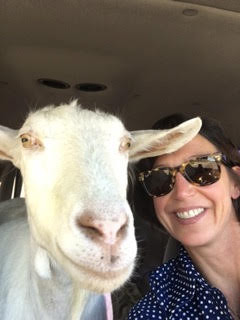 Meet our Herbie of the Week: Deborah!

After years of managing restaurants, this restaurateur made big life changes.

She went from working for restaurants that serve meat to helping open a vegan restaurant.

Now she's raising chickens and other animals instead of eating them.

My love affair with food started a long time ago. I’ve always enjoyed all types of food, and was the kid who always finished everything on her plate. I always loved to eat. I’ve been lucky to have a fairly high metabolism, so my hearty appetite wasn’t an issue. Our family ate the standard fare for middle class Americans; pot pies, casseroles, tacos, turkey at Thanksgiving, and pot roasts on Sunday. I worked in restaurants to put myself through college and enjoyed the experience, but studied and worked in Fashion Design. Then, I met and married a chef at 21 and began a career in restaurant as a manager and later an owner. I ate lots of different foods, and many of them were very rich and heavy. Almost every dish had meat in it, and I became a gourmand; eating at many high end restaurants and running our own restaurant where we served meat and fish.

Fast forward 25 years, and I had been living in San Francisco for all of this time. I had flirted with vegetarianism in the last couple years, and didn’t eat a lot of meat, but I did eat some and loved cheese. I had volunteered at the SPCA and a wildlife rehab center, as I always had a passion for animals. During this time, after working for a few years as a commercial pilot, I left aviation and got back into the restaurant business. I managed a restaurant that served a lot of meat, and in particular, served whole animals for special groups and parties. It was the first time that I witnessed a whole animal being butchered, cooked, served whole, and eaten. It really shocked me, and I began to make the connection between food animals and my dogs, as they were not too far apart in size. I wondered how people were able to eat a whole animal without feeling bad or guilty, or sorry for the baby animal that had its life stolen. I was very saddened and shocked by what I saw, and eventually left that job.

Shortly thereafter, I was opening restaurants with my partners in San Francisco. We offered some vegetarian and vegan options, but had meat and fish on many dishes. During this time, I really didn’t think about adopting a vegetarian or vegan lifestyle.

About three years ago, I moved from San Francisco up to Santa Rosa. I bought a property with a couple of acres, and decided that I wanted pet animals. I started with a small flock of chickens, and really enjoyed watching them grow, caring for them, and experiencing their personalities. It made me really think about chickens as individuals, and I gained respect for them. I ate their eggs, but only the ones they didn’t sit on. A few chicks were born there as I had one rooster ( I had no idea that when you bought chicks from a hatchery, that the males were killed), and it was really amazing to see these baby chickens them hatch and grow. I was especially impressed by the care that the mother hens showed for their young. Then I got goats. I have always loved all animals, but especially goats. I started with three small very young goat kids. I bottle fed them, spent lots of time with them, and really fell in love with them. Like the chickens, I came to know each of them as individual beings, with personalities, emotions, and desires. In some ways they are no different than my dogs. They are curious, playful and clever; each one being very unique in their personality. At this point, I really began to think about all animals, not just my dogs, in a totally different way.

Then, one day I watched a video by Gary Yourofsky that someone had forwarded to me. It was a very powerful and assertive speech that he gave, and it really affected me. I cried almost the entire time. It was the first time that I truly witnessed the process of animals being slaughtered and turned into food, clothes, shoes, etc. At that point, something clicked in me. I realized that I was part of a very violent process, and it really made me think. I dove in and watched all the food documentaries, read many books on plant-based nutrition and animal rights, and basically tried to learn everything I could about animals as food, and the vegan lifestyle. One person who really touched me deeply was Philip Wollen. The story of how he had an eye-opening experience in a slaughterhouse and subsequently changed his life completely really inspired me. I decided one day during this time that if I was to live a life true to my ideals and beliefs, I really had no choice but to go vegan. It kind of took me by surprise, honestly. I felt it was a choice, but also an obligation. I couldn’t be a part of such a violent and ugly process. I decided then and there to go vegan. The biggest motivator for me was my love for animals, and my horror at what so many millions of animals go through.

I dove in and tried all kind of vegan food products and vegan recipes. It was fun, new and challenging in a good way. My sister had been vegetarian since age 11, so I got a lot of advice from her. Cheese was the hardest to give up, but after a couple months it was really easy to go without it. Honestly, dairy is almost a worse food choice than meat, as the animals go through such continuous mental torture having their babies stolen from them at birth. I’m not a mother, but I know how strong the bond between a mother and her baby is. I was shocked to learn that these female cows are impregnated and then their babies are stolen from the, and this happens over and over. And the shocking part is that most people don’t realize that animals have to give birth in order to “make” milk! It shocked me. At first I ate a lot of fake meats and processed meat and dairy replacements, but gradually and somewhat quickly, my palette changed. I began to crave fruit, greens, juice, beans, and healthier foods. I still eat all kinds of vegan food, including a small bit of fake meat, but less and less these days. I don’t miss meat or dairy at all. In fact, the thought of eating meat, drinking milk or eating cheese made from milk is repulsive. I cannot imagine putting dead animals in my body, or supporting the process that is dairy. I am so ecstatic with this change, and I feel great mentally, physically and spiritually. I wish I would have figured this out sooner in my life, but better late than never. I’m grateful for the change, for the information that I found by chance that first day, and for the opportunity to create a better life for animals, for myself and for the planet.

Today I have 14 goats, 5 pigs, 30 chickens, and 2 dogs; most of which are rescues. They are all wonderful, unique, happy, healthy, and very spoiled. I have been working for a company running a pop up vegan restaurant in San Francisco. It’s very exciting to be able to pair my restaurant experience with my passion for the vegan lifestyle. We have had the good fortune to help with many special events, catering, festivals, parties, etc; having fun showing people how delicious plant based food can be and partnering with and cooking for the wonderful folks at Farm Sanctuary, Factory Farming Awareness Coalition, Bay Area Veg Festivals, and many other groups. In the future, I'd like to expand my sanctuary into a non-profit business with employees, and be able to save more animals and further education. I'd also like to start a consulting business helping mainstream restaurants add more plant based options to their menus. 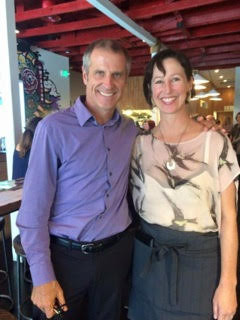 There’s definitely a lot of work to be done, so many animals to save, and a lot of hearts and mind to touch. But I do think the tide is changing. Many people now understand how harmful animal agriculture is to the planet, and how a plant-based diet can really improve your health. And many of us also realize how individual and wonderful all animals are. They, like us, deserve a life filled with freedom, happiness and love.

It’s tough sometimes to think of all the animals that are suffering, but it’s important to stay positive, lead by example and gently inform people of their ability to make better choices, for whatever reason that touches them. Whether they are motivated by concern for the planet and environment, a desire to improve their health, or the ethics of treating other beings with love and respect, many people are realizing that plant based eating is a positive force and a fantastic choice that can reward them in many ways. I continue to be encouraged by all the lives I touch, even though my actions are small in the scope of what goes on in the world. I do know that I’m making a difference, and I’m part of an amazing group of people world wide that are behind this movement. There are hard days, when the task seems daunting, and I feel sad and overwhelmed. When that happens – well, I just go sit in the pasture, hang out with my goats, pigs, chickens and dogs, and I’m blessed with wonderful moments filled with peace and love. They remind me how beautiful and simple life can, and should, be. For All Beings.

Thank you so much Deborah for sharing your journey with us!