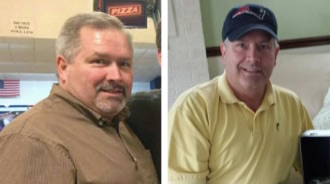 Meet our Herbie of the Week: Randy!

Randy was introduced to a plant-based diet when his wife started researching better ways to combat osteoporosis without medications. He agreed to go on a 28 day challenge with her, and even though he lost weight and felt great, he wasn't willing to part with his favorite foods like nachos and cheeseburgers.

A couple years later his son Brent, a former Herbie of the Week (you can read his story here), went plant-based and asked Randy to join him on his journey -- and he said yes!

In less than 3 months, Randy not only lost 40lbs, but also lowered his cholesterol, his digestion issues went away and he has more energy! 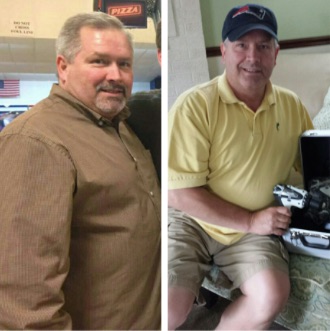 As a 50+ year old man, the last thing I wanted to do was change my eating habits. I grudgingly submitted to a plant-based lifestyle as a trial run in August 2011. My wife, Kelita, had been diagnosed with osteoporosis, and was researching a better way to combat it rather than pills and medications. She watched "Forks Over Knives", read "The China Study", and found The Happy Herbivore. She asked me to do a 28 day challenge with her and I agreed. Within 3 weeks, her symptoms were gone and she was pain free.

Although I lost almost 15lbs, and felt great, I was not willing to forego my nachos, cheeseburgers, and soda! My wife went on to become certified in Plant-Based Nutrition through Cornell University, and I would eat what she fixed. However, when I was alone, or we went out to eat, I ate whatever I wanted and continued to gain weight and feel miserable.

My wife continued to see remarkable results. Not only was she able to reverse her osteoporosis, but she has the blood work to prove it! She went from being deficient in Calcium and Vitamin D, (while on the SAD way of eating), to NORMAL ranges for both after eliminating all animal/dairy from her diet! 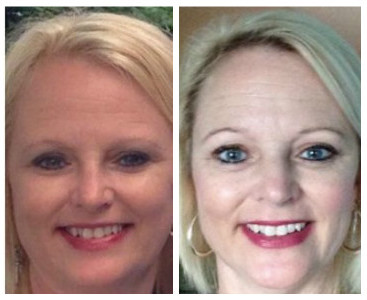 Then, in November of 2014, my son Brent, decided to give plant-based eating a try. My wife hooked him up with lots of info, and steered him to the Happy Herbivore. His results were incredible! My son, who has a degree in Exercise Science, and who was overweight, eliminated migraines, IBS, fatigue and looked and felt so much better! He was on his way to becoming healthy! This got my attention - especially after he called me and asked me to join him on his journey. He gave me a plan and offered to follow up with a bi-weekly phone call. I eliminated all soda, increased my water, and totally eliminated all animal products from my diet. In March of 2015, I weighed almost 270lbs. But I am happy to report that by mid-June I had lost almost 40lbs, but that is not the best part!

In 2000, I had my gallbladder removed. Because of this, my digestion issues had become quite inconvenient and on a daily basis. I chalked it up to the missing gallbladder and refused to believe it had anything to do with what I ate. Whenever we would dine out, I always had to plan my drive time home, or to my next destination, by the availability of a decent restroom along the route. This was not only frustrating, but embarrassing when out with friends. On top of this, I had no energy, was out of breath easily and my blood work was such that my doctor wanted to put me on a statin medication. (cholesterol was 301!)

One of the first things I noticed was my digestion issues became almost non-existent right away. My energy increased and I had my blood work done and my cholesterol was down 21 points in only six weeks! I have been a high school basketball official for over 30 years. I was dreading the season because of the energy I needed to run up and down the court. Plus, when I saw myself on sports highlights on the news, I was always embarrassed by how big I had allowed myself to become. I am excited for the season to come for the first time in several years.

The guys at work gave me a hard time at first, but now, they are asking more inquisitive questions. Oh - and I can TASTE foods again! You do not realize how much everything tastes the same until you can actually taste the different foods.

I have taken up cooking healthy and enjoy the Happy Herbivore recipes. I am particularly enjoying shopping at the local farmers market. I feel terrific, I walk on a regular basis, and me and my wife eat the same foods now. I have a goal of 30 more pounds to be at a healthier weight, but for the first time in over 10 years, I am under 240!

I am very happy that my family stayed true and did not give up on me. We are already planning the holiday meals this year with excitement. On the July 4th, for the first time ever, every single dish was plant-based and no animal products whatsoever. I enjoyed every single thing I ate. We had friends over, who have also adopted this way of eating, and the day was terrific.

This may sound very self-centered, but my main reason for not going plant-based was I did not want to give up taste, and I was convinced that things I would have to eat would taste terrible or not be as good as my SAD food. Boy, was I wrong.

I am thankful for all the information available and the support through Happy Herbivore and to Lindsay for her fabulous meal plans, recipes and ideas. Our way of eating and our health has been changed. We have much improved and it has impacted my whole family.

Thank you Randy for sharing your plant-based journey with us!