Why We Shouldn't Hate on Celebrities for Going Vegan 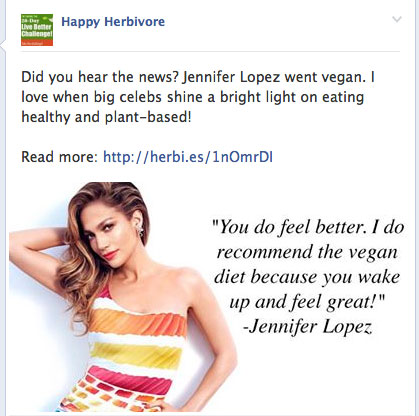 On Wednesday my mom sent me this article saying, "Did you know Jennifer Lopez went vegan?"

I couldn't believe it and quickly put a little meme together and posted the happy news on Facebook.

The first few comments bashed JLo and how she wasn't really vegan -- and then the thread just got hateful and ugly (You can read it here.)

In response to the heat, I posted this on Facebook shortly thereafter: 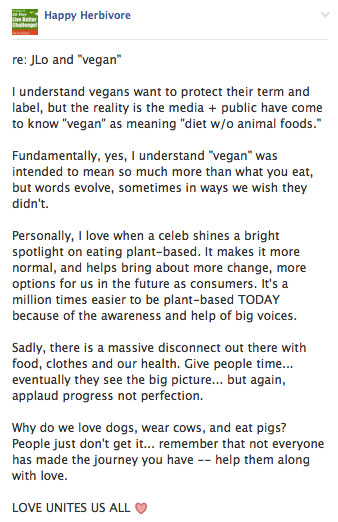 If you can't read it, it says:

I understand vegans want to protect their term and label, but the reality is the media + public have come to know "vegan" as meaning "diet w/o animal foods."

Fundamentally, yes, I understand "vegan" was intended to mean so much more than what you eat, but words evolve, sometimes in ways we wish they didn't.

Personally, I love when a celeb shines a bright spotlight on eating plant-based. It makes it more normal, and helps bring about more change, more options for us in the future as consumers. It's a million times easier to be plant-based TODAY because of the awareness and help of big voices.

Sadly, there is a massive disconnect out there with food, clothes and our health. Give people time... eventually they see the big picture... but again, applaud progress not perfection.

Why do we love dogs, wear cows, and eat pigs? People just don't get it... remember that not everyone has made the journey you have -- help them along with love.

LOVE UNITES US ALL"

Specifically, I talked about how all change counts... that the "all or nothing" approach doesn't work.

That nitpicking and critiquing where someone might fall short in your view of perfection (A view they're not even aware they're being measured against) does a disservice to everyone...

But back to the celebrities.

It made me so sad to see so many people hating on Jennifer... it reminded me of all the drama around Jay Z and Beyonce at the end of last year...

We shouldn't hate on celebrities for "going vegan" even if they are "doing it wrong" or fall off the vegan wagon...

....because when a celebrity shines a bright spotlight on eating vegan or plant-based, it makes it more normal. It brings about more change. It's a million times easier to be plant-based TODAY because of the awareness and help of big voices.

If you don't think President Bill Clinton's "vegan-ness" (or 98% plant-based-ness) hasn't helped, I assure you it has. Or any of the many athletes and other celebrities like Ellen DeGeneres, or Anne Hathaway or Samuel L. Jackson, or whomever, even if they ended up falling off the wagon or not being 100%.

I fully believe in my heart that Bill Clinton going plant-based (along with Oprah having a big event about it on her show) helped push MY parents to do it themselves.

Because those are their peers. Those were people they knew and respected... They were smart, successful people saying "this is okay, it's not weird."

It was more than just me, their free spirited daughter, saying it.

Every day I meet someone who tells me they went vegan or plant-based, or are trying to get there, BECAUSE they heard about it from Lea Michele or a friend who heard it from Jared Leto or something else that traces back to something that involves word-of-mouth.

Let's let them use their big mouths... even if they aren't perfect in their delivery or execution.

Because if JLo's comment about feeling great as a vegan gets 100 people who never heard about it looking into it... and trying it... and if only one out of that 100 stays vegan/plant-based... that's still a win... and a huge win... because that person will become a wellness warrior...

He or she will then lead by example and maybe spread. This is what I mean when I say even 2% matters.

When I first got into the business of being a blogger, a marketing professional I go to yoga with said "There is no such thing as bad press. No matter what!" and that is true.

We must also remember that Rome was not built in a day.

It is a JOURNEY and we have to give people a chance to travel the path we have.

Most of us did not go from 0 to 180. I didn't. I was a vegetarian for years without having a clue that maybe I should stop wearing leather too if I was so passionate about helping animals.

There is a HUGE disconnect out there... why do we love dogs but wear cows and eat pigs?

One other comment I feel I HAVE to make... For years I have heard certain groups say, point blank, that the only way you could truly convert someone to be "vegan" or stop eating animals, is via animal rights and ethical channel... not by their health because if they don't get skinny or whatever, they'll go right back to their old ways...

I know plenty of animal rights vegans who went right back to eating meat... including "famous" vegans...

People do what people do...

I don't care WHY anyone went vegan (and neither do the animals being saved... they're just happy to be ALIVE).

Personally, I believe the more motivations to keep someone motivated, the better.

I have also found that when someone starts caring about one thing, the other things fall into place.

A friend of mine was by no means an animals rights activist when she went plant-based. It was all because she had T2 diabetes... and where was she a few weekends ago? Protesting the circus.

Any motivation someone has to eat more plants and less animals is a good one... whether they are a celebrity or the average Joe... and everyone screws up in the beginning...

It feels odd I'm even writing about this because 5 years ago I never would have, in a million years, believed Beyonce or Jennifer Lopez would be vegan for 24 hours... or even know what "vegan" is...

And yet here we are... the world is changing, and that's awesome.