Herbies of the Week: Where Are They Now? Pragati, Lisa P, Aaron, Jeannine & Jenn E - A Year (or Two!) Later 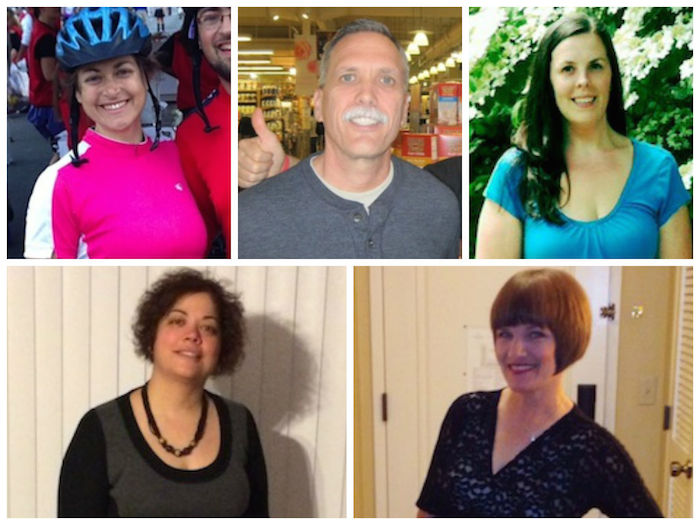 I think my crowning achievement on this blog has been the Herbies of the Week series, which I look forward to every Thursday!

I've decided to start reaching out to our past Herbies of the Week to see where they are today, a year (or two!) later.

Pragati (our first international Herbie of the Week) switched to a plant-based diet after the birth of her son. In just 21 days Pragati saw the many benefits of eliminating dairy and meat from her diet -- including an 8lb weight loss! "I feel lighter, less sluggish and have more energy. I don't feel bloated after meals and the best part - I don't have to control how much I eat."(Read Pragati's full story)

Update: "I lost 27lbs in the first 10 months and haven't lost any since. I think my body (I'm hypothyroid) has reached it's equilibrium and I'm happy with that. I've been plant-strong for 2 yrs and 1 month. I haven't been sick since I started (I used to get the most horrible sinus and lung infections), & no migraines. I have a ton of energy which I need to keep up with my full time job and a 4y old. My cholesterol is down to 139, trigly to 102, HDL 44 and LDL 75 (yay!). I actually use my elliptical for exercise and not as a clothes hanger anymore. I'm slowly working on converting my husband (he's still not there after 2ys). My MIL is a convert though - her doc of 30yrs told her she hasn't had blood work this good since she was in her 20s.This year my goal is to move towards a more minimalist lifestyle." - Pragati 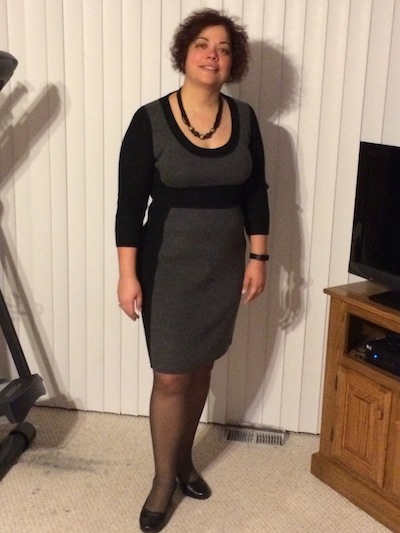 Lisa P was inspired to try a plant-based diet after seeing a segment on Dr. Oz's show. Almost a year after that episode aired, Lisa went from a size 16 to a size 4 and lost a total of 65lbs! On top of the incredible physical transformation, she no longer craved processed junk food, and had a lot more energy. "I honestly feel like I know a secret and want to share it with all. So many people can't believe that you can live (and thrive) on plants!"(Read Lisa P's full story)

Update:"Hello and many Happy Herbie wishes to all in this New Year! March 30th was my 3-year "veganversary" and in February I turned 48 and I couldn't be happier! I love this way of life and will NEVER go back! For the past 3 years, I have felt "normal". Until my new, vegan life, I never understood why I was so addicted to food. The answer came to me about two months into my journey. It was... I was so addicted to processed food, including fats and sugar, my body couldn't get satisfied. I found the secret....eat real, plant-based foods and nothing else. It has worked. Those nasty 65 pounds are still gone and I am so grateful that I stayed on the journey. To those just start starting out, hang in there! Let your body go through the withdrawals. Things get better...then fantastic...and real, whole plant foods become amazing and so, so delicious!" -Lisa P 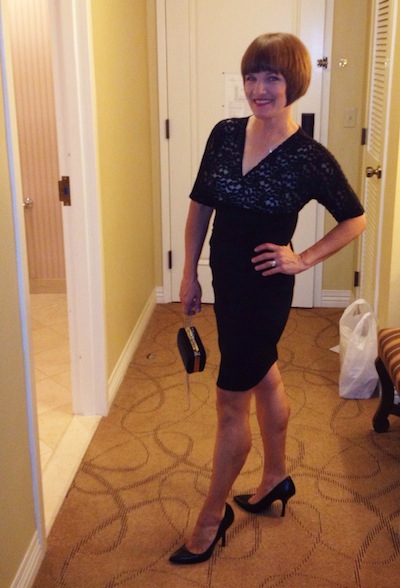 Despite taking medication for high blood pressure, firefighter Aaron considered himself to be in OK health, that is until he was put on statins to lower his cholesterol. With a little encouragement from his wife, Aaron hung up his Ambassador of Baconhat andmade the switch to a plant-based diet, which resulted in him shedding 22lbs and no longer needing his meds. (Read Aaron's full story)

Update:"It has been just over two and half years since going plant-based. I am still only 90-95%, as work and traveling may require otherwise. At home I am 100%. I have moved to a new station and we are making more plant-based meals. Many nights we have no meat or dairy on the table at all. (Remember in my first interview that meat was the base for most meals in the firehouse.) However, my crew recently sent me a picture of their steak dinner while I was on vacation. Firehouse humor.

My health continues to get better. I recently had a physical, and the PA I saw said, “Come back when you have something wrong with you.” That was very encouraging, as it was another doctor within that practice whose poor advice caused me to seek out a plant-based lifestyle.

Since my interview I have participated in the Tough Mudder twice, ran a couple half-marathons, a half-Ironman, and the California International Marathon in December. I am much more active than I was before changing my lifestyle. I am also talking with as many friends and family members about the changes going plant-based have made. It is great to see some of them making small changes towards better health. A few have even gone plant-based.

Here is a picture of Rip Esselstyn at I at a recent talk he gave. Now I just need to meet another author and plant-based guru who has helped me and my family towards a better way of living. Wink wink Lindsay." -Aaron 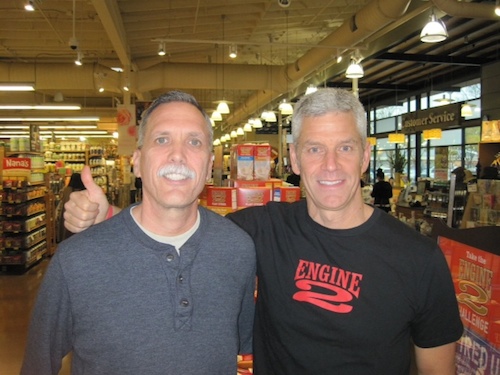 Former Herbie of the Week:Jeannine(June 2012)

Jeannine was diagnosed with Hashimoto's Thyroiditis, an auto-immune disease that causes severe hypothyroidism. After watching Forks Over Knives, she decided a plant-based diet was the best for her health and the changes she experienced were amazing! The former yo-yo dieter dropped 25lbs and lowered her cholesterol by 27 points! (Read Jeannine's full story)

Update:"I got a little off track between Jan 2013 and Jan 2014. We were eating store-bought veggie burgers, fake meats and snacking a little too often on chips and sweets. I eventually gained back 20lbs of the 80lbs I had lost. I wasn't getting in much exercise either.

I'm happy to report that since February I've cleaned up my diet, focusing more on whole foods. Very little processed foods. I no longer snack on chips and we only have one vegan convenience meal per week. I have found the time to do exercise videos in the mornings and now that my lower back doesn't hurt I also walk 50 minutes a day. Since then I've lost 24lbs that I had 'reclaimed' the year before.

I've also experienced a lot of personal & spiritual growth in the past two years. I've become very interested in meditation, yoga and the mind/body connection in general. The biggest change I've experienced is that I no longer allow myself to participate in self-defeating thoughts. It's true, you are what you eat, but you are also what you think.I've learned to replace negative thoughts about myself with loving and kind thoughts. A family friend shared a mantra with me that I've taken to saying daily while looking in the mirror: "I'm learning to love this person in the mirror. I'm learning to be proud of this person in the mirror. I'm learning to believe this person in the mirror is amazing". It felt silly at first, very silly – my throat would tighten up because I didn't believe in what I was saying. I had spent most of my life having self-defeating inner dialogue. After months of this daily mantra it has become so easy that I've now shortened it to "I love you, I'm proud of you, you are amazing". No matter what my mood is, I say it." -Jeannine 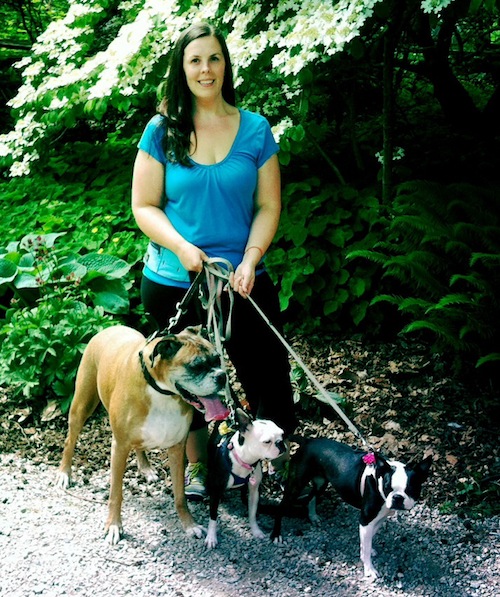 After being lectured by her chiropractor about the negative affects of dairy on the body, Jenn went plant-based as an experiment to prove him wrong. Two weeks later she stopped calling it an experiment and started calling it a lifestyle change. Not only did she end up losing 50 lbs, Jenn also experienced other incredible changes like career improvements and fitness goals. "As my body began to heal, other parts of my life started to heal, also." (Read Jenn E's full story.)

Update:"Life is good! In the past year and change I've completed three centuries (100 mile bike rides), lost another 20 pounds (for a total of about 70 pounds), and met my boyfriend, Alex. Alex changed his diet when we started dating and he's lost about 70 pounds, too. We love riding bikes, living active lives, and being healthy happy herbivores!" -Jenn E 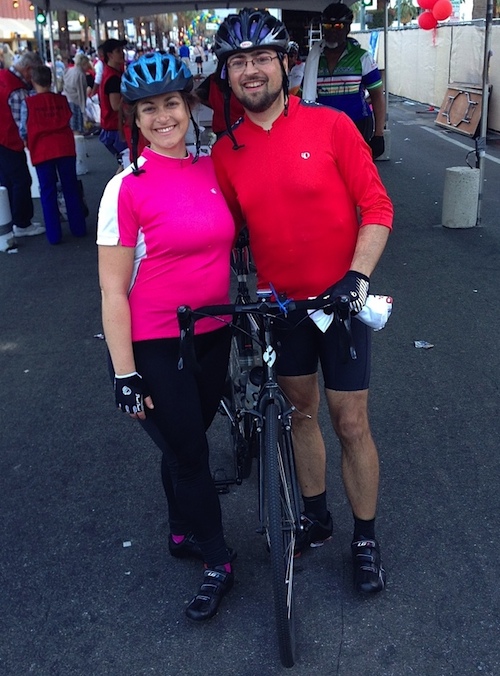 Big hugs and thanks to all of our Herbies of the Week! We are so happy to see you're still chopping carrots and taking names a year (or two!) later!

Catch up on Pam, Lisa R, Jason and Kay too -- Where are they now?