Minimalist Monday: Living on a Boat (Guest Post by Andria!) 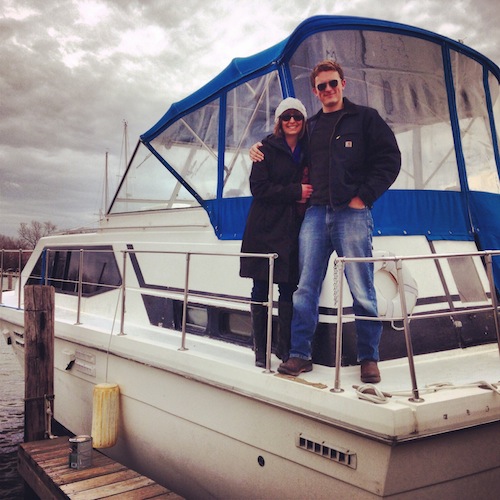 Earlier this year I hosted a Virtual Minimalist Declutter Party Challenge (you can see the incredible before and after photos here.)

A couple days before the party, Andria posted a comment on the Facebook event page about her minimalist experience: 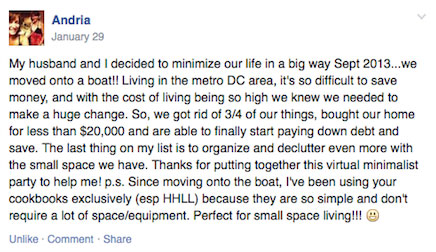 I couldn't believe it! I was so impressed by her story, I immediately reached out to Andria and asked if she would share her minimalist journey on the blog.

I'll let Andria take it away...

There I was living in my lovely home state of Michigan; a newlywed, unemployed, and sitting on a Master’s degree that wasn’t doing me any good. Terrified of leaving my home town, but desperate to get out and begin a career, after a year of interviews I was finally offered a job. In Alexandria, Virginia.

My husband Chris and I didn’t hesitate and jumped at the chance. We would pack up our stuff and be gone three weeks later, leaving all of our family and friends behind. This was our opportunity to live “the American dream.”

If you know anything about the D.C. area, you’re aware that the cost of living is insanely high. Especially for one individual, who is now employed by the state (me), and the other who is still searching for his big opportunity, but working retail in the meantime (Chris). We did what we had to do though. My parents paid our first month’s rent of $1,328 for our 650 sqft one-bedroom apartment (thank you!!), we had zero in savings, and two maxed out credit cards from our wedding just a few months prior. Not to mention the intense amount of student loan debt with a huge monthly payment. Needless to say, we were underwater barely able to tread. But, we both had jobs and were determined to make it work. Only a few short months later Chris found his calling as a firefighter, and hasn’t looked back since.

We found ourselves struggling to save money, and what little we could save often was used in the following month for essential necessities. You know like, food. Gas. Utilities. At the height of our rental years, we paid $1,850 for a one-bedroom apartment. Not including utilities.

Things we felt like were luxuries took a back burner. No more cable, less trips to the coffee shop, better phone plan, etc. But it never felt like it made a difference. We were still relying on credit cards far too much, and still were not able to pay them down. We needed a change.

We moved out of the city.

Living out in the country felt less suffocating, and in our eyes much cheaper. Instead of an apartment, we found a nice house to rent for $1,295. Not much less than our very first apartment when we moved to the area, but at least we were getting more for our money. Which seemed important at the time. However, living further out also meant we had to commute in for work. Commuting equals more gas, which equals more money. Not to mention my sanity.

I started to feel like we were worse off than when we first began this journey three years earlier. I was becoming unhappy with my job, which made the commute even worse. But I didn’t have a backup plan, so we needed my job, my income, just to survive. Speaking to my mom one day she suggested, half kidding probably, that we move onto a boat. I laughed at her suggestion and continued the conversation in a different direction. But the more suppressed I felt, the more that suggestion kept entering my mind as an option. 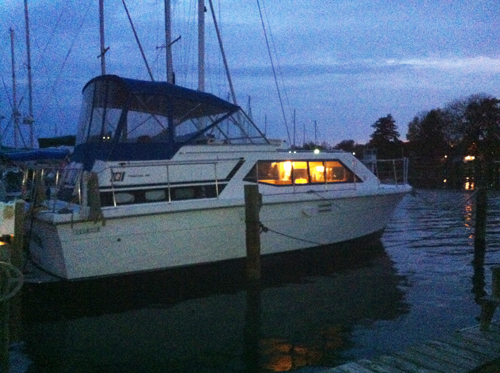 The idea of living smaller really became clearer after several failed attempts to find and purchase a house within our budget. At some point during the process I remember telling Chris that none of it felt right. That it didn’t make sense to add large amounts of debt to more debt. So I presented him with the idea of moving on to a boat, living smaller, and being able to pay down our debt and save money. After many nights of convincing, with a few cocktails I’m sure, Chris was in. So in July 2013 we began looking for our next home. One that we could put money toward owning, not renting.

We set our purchasing limit to $20,000. The chain of events that occurred after we finally found it happened so fast, I can hardly remember. But, all you need to know is that it ended with the keys of a 1979 Trojan Tri Cabin in our hands for $18,000, and payment of just $330 per month.

Now that we had the boat, we needed to decide how to downsize. We started with one room at a time. First the bedroom, then the closets, and onto the bathrooms. The office and living room were next. Deciding which electronics and books to donate and take with us. Then finally, the kitchen. My sacred space. That was by far the most difficult for me because cooking is my de-stressor, and I did not want to part ways with some of my utensils. What will I do without a food processor? My juicer? My Kitchen Aid mixer??!! 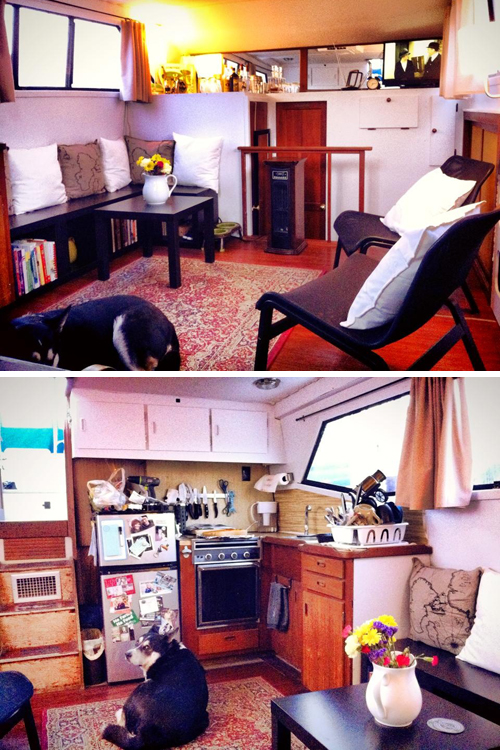 We both had to donate, sell or relocate (my mixer is at the firehouse!) many of our possessions, and guess what? We don’t miss them, nor do we need them. Each of us has kept quite a few sentimental or family things, but overall the boat has ample storage space and hidden cubbies. Most of which we still haven’t filled because we don’t have enough stuff! Still no cable, or weekly trips to the coffee shop, but that’s because we’re used to it and don’t find it necessary. We’ve also done some work on the inside to make it homier. New paint, wood flooring, an Ikea bench hack for the nook, new pillows, and some key lighting all did the trick. More to be done I’m sure.

Since moving on the boat in September 2013 we’ve paid off three credit cards, saved a couple thousand dollars as an emergency fund, and the best part; that I am able to quit my job and pursue other passions in life without us having to rely on a second income. That to me is priceless. By the end of our year being on the boat (and five year anniversary of moving to the area), the roughly $14,000 that normally would have gone towards rent or a mortgage, will have gone towards us being completely credit card debt free and finally having savings in our account. 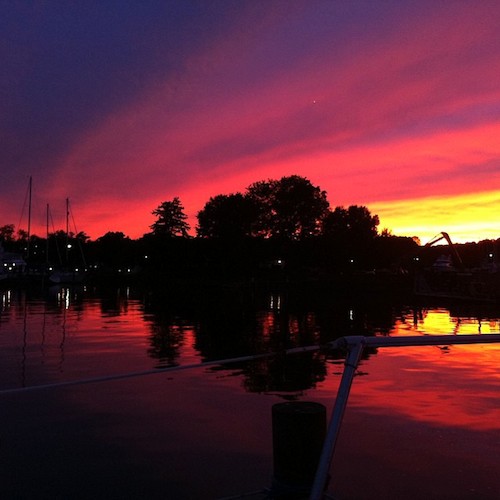 We came out here to live “the American dream,” and discovered that every person’s dream is different. Some people love the idea of having a house with a white picket fence, 2.5 kids, and a job they never tire of. But with that dream comes debt up to your eyeballs, a mortgage, and most often a job that is only in your life to pay for that dream. Our dream still exists; it just replaces all of that with a lovely two-bed, two-bath ‘condo’ literally on the water, with a dock instead of a fence. One of the lowest mortgage payments you will ever find in the metro D.C. area, a dog, and the financial freedom to take control of our future. When you live with less, you need less. I can’t imagine doing it any other way right now. This to me is the American dream.