Minimalist Monday: Judging Others (Let's Talk About It) 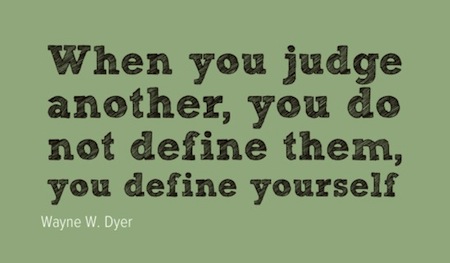 In case you missed the news, earlier this month I released my first minimalist book (inspired by this very series!) Minimalist Monday: Declutter Your Way to a Zen Home.

This week I'm releasing my second minimalist book, Minimalist Monday: Decluttering Your Life! Letting Go of Emotional Baggage, Toxic Relationships, and Social Chaos to Build Your Ideal, Zen Life(pre-order here) and today's topic is a bit of a sneak preview!

Today's topic also came as a request by email :)

"Hi Lindsay! I'd be interested in seeing you do a blog post on "judging". It seems to be a natural human emotion? Can you really stop judging? Or is it just your reaction that you can control? Is it bad to judge?"

One thing I've been working on lately is getting away from the black-and-white, good-vs-bad style of thinking.

While there are always some clear villains, I think most things tend to hover in the grey area, and shift to a polar shade depending on the circumstance.

Admittedly, this was something I really battled with in law school. There is no right answer, just the best argument.

With most behaviors, I think they could be classified as "good," or "bad," given the right situation.

I can think of no better example than passing judgement. Sure it's easy to say judging someone or sizing them up is "bad" and something we shouldn't do, but we also judge and size people and situations up all day long -- and that's often how we keep ourselves out of potentially dangerous situations.

Judging is deeply ingrained in our human operating system (a great book on this topic is The Moral Animal: Why We Are, the Way We Are by Robert Wright.)

So instead of deciding whether it is "good" or "bad", let's accept that it is necessary and go from there.

What I have learned about judging is that judging says a lot more about you than the person you've judged.

That classic grade school wisdom rings true: when you point one finger at someone, four more point back at you.

Indeed, we do see what we want to see. (I touched on this briefly in my I have a Dream post a few weeks ago. Words truly are the subject of the hearer's interpretation, regardless of the sayer's intention).

Here's an example from my own life:

I said to a friend; "How dare you judge her!", referring to a comment she had passed about a mutual friend's decision. The "judging" friend then replied to me, "You realize you just judged me for judging her... the very act you're so pissed about."

It makes my head spin, but it's true.

The reactions we have are truly mirrors of ourselves.

I first brought this concept up when I talked about negativity and dealing with naysayers.

Specifically explaining why people can get downright angry and hostile because you've adopted a plant-based diet.

Minimalism has been a great mirror for me in many ways. I have often had to look back at myself, or my practices, and face certain, hard truths. (If you need an example, check out my minimalist post on dealing with mementos and keepsakes).

Minimalism has made me realize how my negativity (towards anything) has always unmasked me. Even when my points were factual or valid, there was always still that tiny, lingering stench of jealousy.

I'm very fond of this saying, "The worst thing someone can say about you, reveals a little truth about them."

Being a public figure has forced me to learn how to hold my tongue, and at times, bite it.

My parents always told me to "think before I speak", which I never really did (but certainly do now), and "if you don't have anything nice to say, don't say anything at all."

I've really been working on that part, especially since I stopped trying to complain. (Don't complain for 24 hours, it's an amazing, eye-opening challenge).

When I feel the urge to be negative or judge, I try to twist it into a positive. I try to find the compliment that's hidden in there.