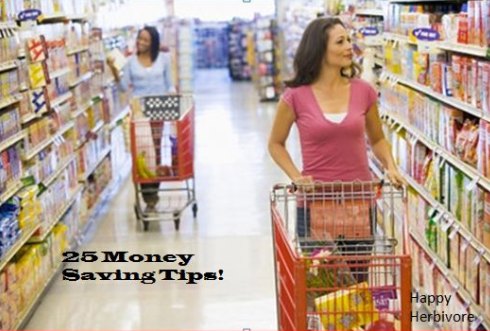 Over the summer I shared my 10 BEST Ways To Shrink Your Grocery Bill.

Seriously check out those tips. Some of them may surprise you!

"Been eating @happyherbivore meal plan for 1st time and everything is so yummy & I got out of Wallyword for under $100! Husband loves it too" - Sharon H via Twitter

A few weeks ago, two Herbies shared their bargain finds on HH's Facebook wall, which lead me to asking everyone for their penny pinching tips and recent bargain finds.

Here's what they said:

“I took your tip and bought nutritional yeast through bulkfood.com and loved that experience! Also bought some unsalted dry roasted peanuts to make peanut butter and old-fashioned rolled oats. Thanks for that tip!”

“At Whole Foods, I scored 8 cases of Westsoy unsweetened organic soymilk for only 35 cents per quart after using the $1.00 off coupon (copied x 96) and the 10 percent off case discount. It was on sale for $1.50-then take off 10% case discount-and deduct $1 each”

“I order Bob's Red Mill's flaxseed, chia seed, lentils, rolled oats, and split peas online at vine.com. Shipping is free over $35 and is cheaper than what the grocery store here has. They also have hundreds of options for non toxic cleaning supplies! It's awesome.”

“We have a place called Grocery Outlet out here in the PNW and I remember I used to judge it harshly based on the name. Well, now I'm eating my own organic vegan words because they have GREAT stuff there!! Tonight I picked up a bunch of salad fixings, some wonderful bread, a bunch of frozen organic veggies that I like to use cooked in some recipes and some other basics. I LOVE Grocery Outlet! They also have less than desirable stuff but if you look in the right spots, you can really do quite well there and all for great prices!”

“Costco also has organic bananas and apples right now. Organic carrots. Almond milk. Soy milk. They are keeping up with what customers want. I'm always impressed with what they carry. Amazon has some deals too.”

“Organic quinoa, organic brown rice and other good grains by the barrel at Winco”

“Our Aldi often has great prices on produce. Most is non-organic, but they do carry organic baby spinach and artisan lettuce. I also like their almond and soy milk, and I even found organic granola there! They have natural peanut butter, 75% fruit spread, and fruit cups in 100% juice. I have also bought the veggie broth and veg chili there, and the fajita tortillas are vegan. So are the non-fat Refried beans. :0)”

“Found out this weekend that Walmart has a line of organic canned products called SAM's Choice. They average about $0.88/can. Great bargain for corn, beans, tomatoes, etc.”

“Aldi has a 16-ounce bag of frozen edamame for $1.49. I love the Esselstyn's butterbean salad in Prevent and Reverse Heart Disease. Aldi's cans of butter beans are 79 cents each”

“I often shop at Grocery Outlet (not sure if that store is nation-wide, though), and I have found coconut milk, flax milk, and almond milk for less than $2. Just this week I bought a 6-pack of organic soy yogurt for 97 cents! It had three days till it "expired," but that was more than enough time for me to finish them all!”

“The sweet potatoes are in season right now; they don't usually carry them. I bought 40 lb last week and will probably buy more. They keep well in a cool, dark place (not the fridge).”

“We don't have a Costco/Big Lots/Whole Foods/Trader Joe's in my rural area but I love Grocery Outlet in northern California. You can get a lot of products at basically half price, you just have to check regularly.”

“ALDI is starting to carry more products I am interested in - they have agave and real maple syrup now. I have always loved their hummus, guacamole, and salsa, and it is a great place for produce that I don't always buy organic. Since my last visit they have also started stocking almond milk, but it is not unsweetened.”

“Save A Lot has great prices on beans- canned and dry, canned tomatoes, frozen spinach, and a limited selection of produce. On my tight budget, I often only hit Save A Lot, and the Asian store for tofu. I can easily go a week on $30 or so by shopping this way.”

“My Costco has black rice too. Find a store that sells Indian spices and dried beans. My Mexican market has an aisle of cheap Indian stuff.”

“We get our bread (Alpine Valley or Dave's Killer), hemp seeds, coconut sugar, steel cut oats, celery, mixed greens, spinach, sweet potatoes, grapes, raspberries, carrots, mushrooms all at Costco, and they're all organic for less than conventional at the grocery stores.”

Do you have any tips or secret bargain places to share?