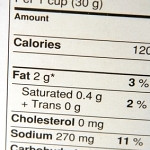 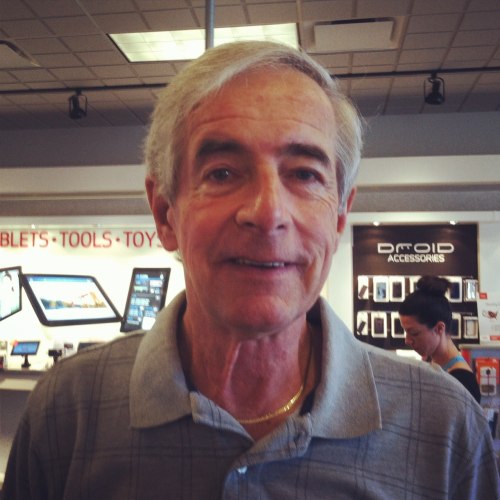 I wanted to share with all the fellow Herbies and other family and
friends who may not be there yet, the significance of being aware of
and controlling salt/sodium intake and some of my views and
experiences.

[Editorial note: After my Dad had a heart attack, he was required to go on a very low sodium diet. The topic of salt became very interesting to him, and now he's a bit of an expert on the topic ;) He (and our entire family) have since become very mindful of our salt intake.]

First, some facts: Salt (sodium) is a mineral found in almost all the foods we eat, and in some cases there is an over-abundance of it. The body needs salt to keep fluids balanced in the body.

However, most people eat foods with more sodium than they need. Some foods may be high in sodium and not taste salty.

According to the Harvard Medical Journal, adults age 51 and older, persons of African-American descent, people with high blood pressure, diabetes or chronic kidney disease, should limit their sodium intake. (These persons are considered "at risk.") 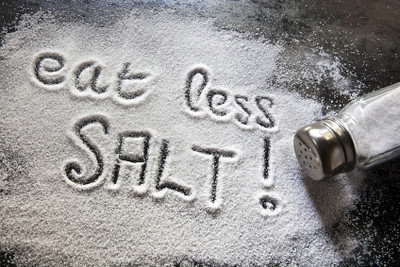 According to the Mayo Clinic, sodium attracts and holds water. Eating too much sodium causes the body to retain too much water. Your blood volume increases, which makes your heart work harder and increases pressure in your arteries.

A frozen dinner could have an entire days worth of sodium in one meal!!

From my experience, let's start with the salt shaker (or lack thereof). Up to 15 years ago I used to freely salt all my foods. (By the way, I never had high blood pressure).

After my first heart stent, I reduced using it to just some selected foods. Since I went plant-based almost 2 years ago, from having had a mild heart attack, I stopped using the salt shaker totally.

One a few things I use Morton's salt substitute. For 1/4 tsp. it has -0- mgs of sodium as compared to 1/4 tsp of  Morton's regular salt at 590 mgs (quite a difference and tastes good as well).

As written by Angela Medearis in "Tidbits", "You may think you like salt so much that you could never give it up. Just remember you were not born loving salt, we develop a taste for it. If you work at it you can desire it less. When you do you will savor the natural flavor of food more."

There are many things you can do to reduce sodium intake. The main ones are:

---Ease up or stop using the salt shaker
---Limit the use of canned, processed, and frozen foods
---Cook with herbs and spices instead of salt
---Read labels and choose low-sodium foods

When I went plant-based, Lindsay increased my awareness on reading
food labels. Now I do it diligently with emphasis on sodium content.

There have been some which have been eye-opening to me and I'd like to
share a cross-section of them.

Keep in mind two things:first, how fast your daily requirement can add up, and second, don't just focus at the sodium content but also on the serving size. If you eat more cereal in one sitting than 1 cup, or more dressing than 2 tbsp, then the intake is increased. It doesn't take too many items to get to your limit. 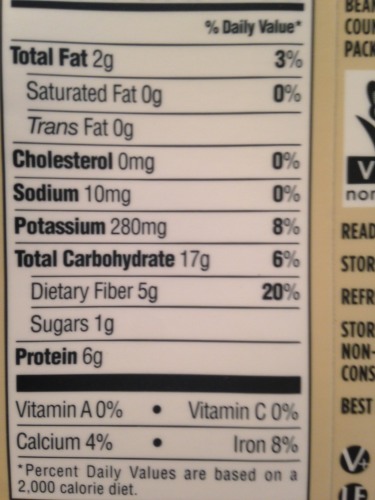 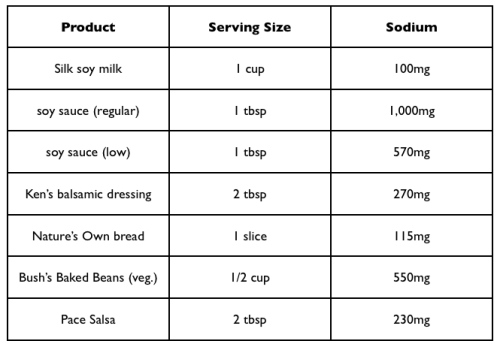 (How much salsa do you eat in one sitting? I bet it's more than 2 tbsps.) 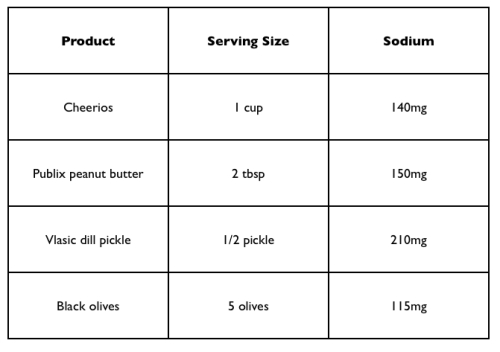 (I know I eat more than 5 olives per sitting!) 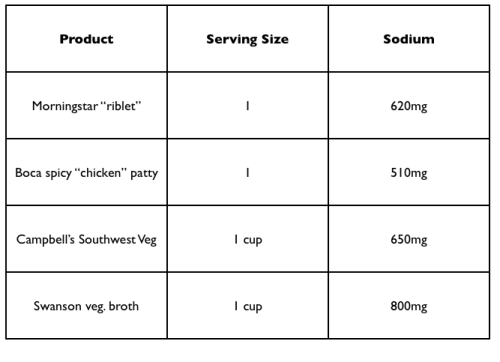 I eat a lot of chickpeas in a week, which one is better for sodium? 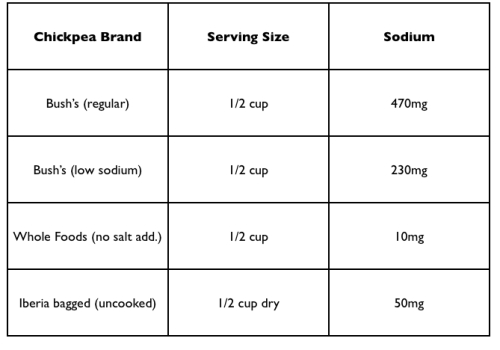 [Editorial note: 1/2 cup dry beans makes a lot of cooked beans, so the value is even lower than it appears.]

Thanks to Lindsay's anniversary present of a pressure cooker, I now
use the latter and cook the beans myself. 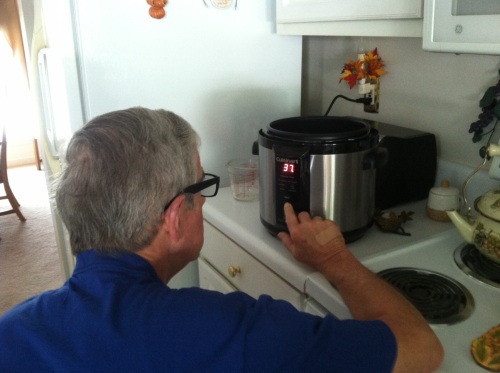 There were two things I found with -0- sodium, Quaker Oats oatmeal and
bagged uncooked rice.

Lastly one of my favorite examples is something I used to eat before going plant-based.

Would you believe no-sugar jello has 55 mg. of sodium in 1/2 cup of jello.

What's all that sodium doing in that product?

Sorry to be so long-winded, but watch your sodium intake no matter
what your age or health :)

You never know what it could help down the road. I hope I've enabled at least one person to be more aware.

Ps. Lindsay has also written some good blogs on this subject.

How to Reduce Salt (video)

Sodium: How Much is Too Much? (+ How to Tame Your Salt Habit)

[Editorial note: And just to show you what an expert My Dad is on salt, here are three previous emails he sent me

A low sodium diet means more than just eliminating the salt shaker from the table! However that is a good start since one teaspoon of salt = 2300 mg of sodium.

--use fresh ingredients and/or foods with no salt added

--For favorite recipes, you need to use other ingredients and delete or decrease the salt added. Salt can be removed from any recipe except those containing yeast.

--Try orange or pineapple juice as a base for marinades.

--Select frozen entrees that contain 600 mg or less of sodium. However limit to one of these frozen entrees per day. Check the Nutrition Facts label on the pkg. for sodium content.

--Avoid mixed seasonings and spice blends that include salt, such as garlic salt.

--Don't use a salt substitute unless you check with your doctor first.

--avoid soups and broths from restaurants and hot bars.

--stay away from bread and rolls with salty, buttery crusts.

--Ask the server about the low sodium menu choices, and ask how the food is prepared.

--Request food to be cooked without salt or monosodium glutamate (MSG)

--Avoid restaurants that do not allow for special food preparation (such as buffet style restaurants, diners or fast food chains)

--At fast food restaurants, choose the salad entrees  or non-fried and non-breaded entrees (such as a baked potato) and skip the special sauces, condiments and cheese.

--Avoid salted condiments and garnishes such as olives and pickles

"Mom & I often look at the sodium content of some products, particularly canned soups and a few other things. As you know, because of my history, the doctor suggests I keep my sodium intake below 1500mg per day. (Note-one teaspoon of salt =2300mg of salt.) So needless to say, we are looking at every single label of everything and its astonishing.

Some examples: we threw out the bottle of soy sauce we had and bought the low sodium version you recommend in your cookbooks (the difference being 570mg vs 980mg!) (I used to pour a lot on some Asian dishes).

Another example: Today I was at the cardiac office and I picked up a few paper articles. One was on low sodium diet guidelines. They have a long list of recommendations and restaurant tips, one being to "avoid pickles."

So I went to our frig. and looked at bread & butter pickles and it said only 110mg of sodium per serving. Guess what the serving size was--3 pickles (slices). Sometimes I would eat as many as 8 + , so again portion control.

There are many more examples, but after we checked everything in our pantry, here's one which just blew me away: In a package of no sugar 10 calorie jello there is 55mg of sodium. What's sodium doing in there?

The article says "Low sodium" = 140mg or less per serving.

I found these seasoning recipes in one of the pamphlet's I picked up. I hope you and the Herbies enjoy them!

Directions: Combine all ingredients in a small bowl and blend well. Spoon into shaker. Store in a cool, dark place.

Lastly, WASH (World Action on Salt & Health) has a World Salt Awareness Week every year. Their website is also helpful.