Healthy! Organic! Natural! Vegan! Gluten-Free! Light! Don't Get Caught in the Buzzword Trap and How to Read Labels 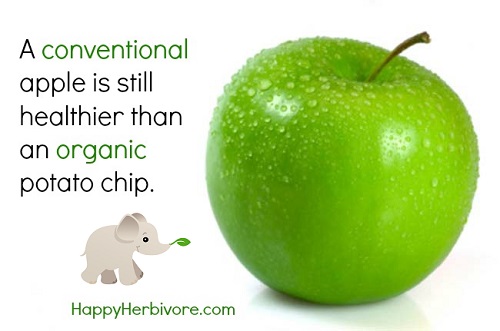 One of the best lectures I ever attended was by Jeff Novick, MS, RD about deciphering food labels. Jeff kept emphasizing to read the nutritional label and never trust or believe what's written on the front of the box.

Although this had been my practice for ages (I always had to scan labels to make sure something was vegan) it never occurred to me that the front of the box is purely an advertisement. That I shouldn't trust it any more than a commercial on TV (which I don't trust at all).

I mean yes, I knew that companies were marketing their items to me with pretty colors and eye-catching fonts, etc. — but I always thought that given the vast laws and regulations around food, that whatever was listed was truthful.

I think what shocked me the most (and then made me question any claim on any package) was milk.

I had never been much of a milk drinker, but I couldn't believe it. I always thought 2% milk meant that it was only 2% fat, or it had 2% of the fat that full-fat milk did, or if nothing else, it was actually low in fat — a low-fat food. But when 35% of the calories come from fat, low fat it is not.

To be fair, I don't think the milk industry every told me any of my false beliefs. I don't remember seeing an ad on TV saying 2% milk only has 2% fat. I came up with these misconceptions all on my own, but that's the point.That's what the milk industry wanted me to do.

I started to realize just how deceptive labels can be. They're loophole central! It's all about catching you in the technicality.

In his lecture, Jeff uses an example of vegetable broth that says it's 99% fat-free all over the box (the front, the side, etc.). 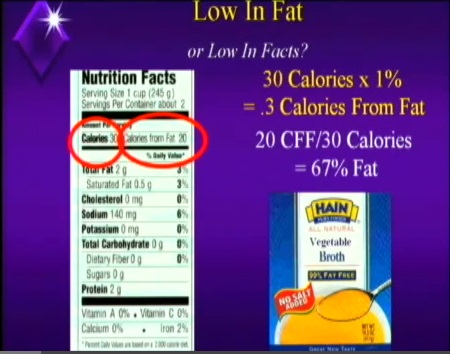 Heading back to math class, if something is 99% fat-free, how much fat should it have? (Answer: 1%).

But is that what we find on the label? NO! The label says 20 calories from fat.

How is this allowed? The food industry can play with its numbers just enough to make these claims. (Like I said, technicality).

For example, as Jeff explained, the weight of the fat (total fat) is listed on the label as 2g. The weight of the cup is 245g (serving size). Divide these two amounts and you get 0.8%  — ahh magic! 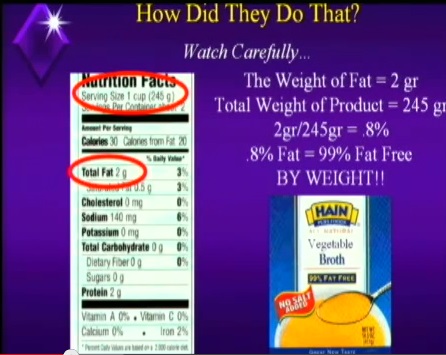 Anyone else feeling this emoticon? >.<

And this is just one example of marketing technicalities that dupe us.

Another biggie is the buzzword trap.

The tricky part with these words is that sometimes it's true — the buzzword isn't a lie or a duping tactic. The food really *is* healthy, but then so many times that isn't the case. For example, an organic, vegan, gluten-free potato chip is still a potato chip. 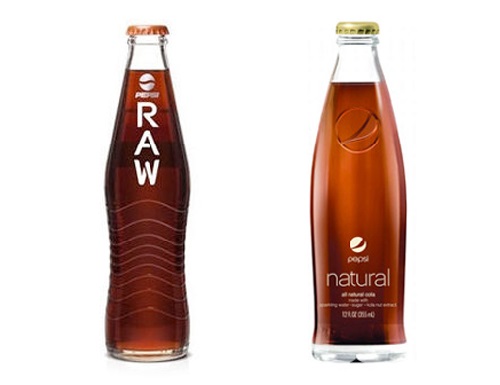 (*Note: the Organic Coke doesn't really exist — but Pepsi Raw was for sale in the UK at some point. I had trouble confirming when researching this blog post.)

I admit this still happens to me. I'll be walking around the grocery store and see something on an end cap that says it's vegan or organic, or maybe both (!), and I'll grab it. After a quick scan of the label (I'm very diligent about this thanks to Jeff!), I realize while it has all the right buzzwords, it's junk. Full of oil and other processed foodstuffs I avoid. Back to the shelf it goes... but the company was successful in getting me to pick it up in the first place. Had I not checked the label...

It's so easy to be tricked by buzzwords and so-called "superfoods" (more on that in an upcoming Part 2!), but avoid that sticky trap! READ THE LABEL :)

I've lived in places where organic options were not always available and even now, sometimes I can't justify the organic purchase. It's either too expensive or it's flown in from somewhere far away but the conventional one is more local, etc. We all have to find our own balance.

There are some scary things going on with our food, I admit. I hate GMOs and tampering with the food supply as much as anyone. I also agree that organic is a better choice, but I also don't fear conventional produce at every corner.

Say it with me: a conventional apple is still healthier than an organic potato chip.

My focus is on eating a whole foods, plant-based diet. If I can make it organic too, awesome. If not, I've still got my plants. 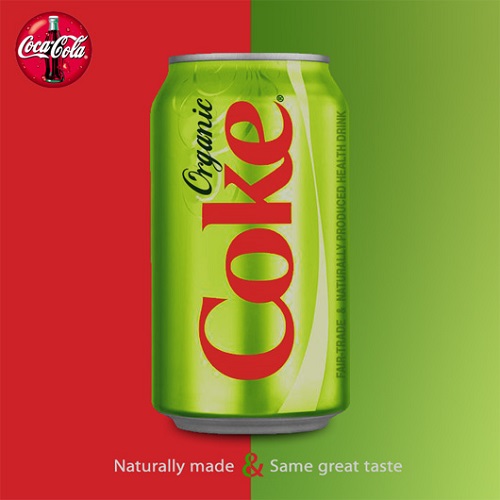 Here are the differences in farming:

Organic:Sprayed with pesticides from natural sources, use beneficial insects and birds, mating disruption or traps (!) to reduce pests.

(*I had no idea about the traps until researching this post. I hope they're humane and release the animals!)

For the most part, organic produce hasn't been bioengineered and it's usually GMO-free. I say usually because there are loopholes.

The USDA releases a report each year on what fruits and vegetables have the most pesticides, and you should try to purchase organic versions of those items. You've probably heard of the "Clean 15" and the "Dirty Dozen". 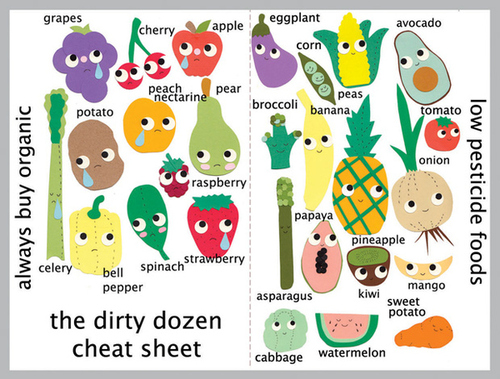 GMO: Although soy is the most known plant food for being genetically modified, organic non-GMO soy is easy to come by as long as you're eating the whole version (soy milk, tempeh, tofu) and not a processed version (fake meats). Corn, zucchini, yellow squash, papaya and sugar beets are GMO'd. Most vegetable oil (canola, corn, cotton, soy bean oils) are GMO'd.

Here's an article by Jeff about understanding food labels.

Engine 2 also has a great blog post about the buzzword trap.

Bottom Line: Eat more fresh fruits and vegetables. Organic if you can, but don't get caught in the "organic" buzzword trap (or any of the buzzword traps). Read your labels.