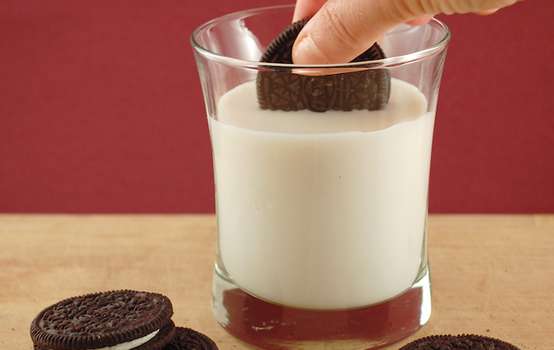 A few weeks ago, someone tweeted at me, "Is it possible to develop an intolerance to dairy after being vegan for a short time?"

Going vegan (or dairy-free) doesn't make you lactose intolerant, yet many people find after removing dairy from their diet, they can no longer tolerate it. Why?

People who are lactose intolerant can't digest lactose, the sugar found in milk. Lactase, the enzyme that helps humans digest lactose stops being produced when the person is between the ages of 2 and 5. Without lactase to break down the sugar, it goes on to the colon undigested where it ferments, producing gas that causes cramping, bloating, nausea, flatulence and diarrhea.

Being able to digest dairy past early childhood is not "normal." Less than 40% of humans retain the ability to digest lactose after early childhood. The numbers are given as close to 0% of Native Americans, 5% of Asians, 25% of African and Caribbean peoples, 50% of Mediterranean peoples and 90% of northern Europeans. (Interestingly, Sweden has one of the highest percentages of lactose intolerant people).

60% or more of humans are lactose intolerant.

Being able to digest milk is so strange that scientists say we shouldn't really call lactose intolerance an allergy or a disease, because it presumes that the intolerance is abnormal. Instead, they call it lactase persistence, indicating what's really weird is the ability to continue to drink milk.

Think of it another way: By consuming dairy you're not only breast-feeding well past infancy (not normal), you're also breast-feeding on another species (not normal either!).Is it really surprising that most people are then "intolerant"?

Those with lactase persistence have a genetic mutation either from European or African ancestors. Small populations of African peoples were historically cattle herders, and that's where their lactase persistence genes come from. The European mutation appeared approximately 7,500 years ago in dairy farmers who lived in the Funnel Beaker region. Today, the highest proportion of people with lactase persistence live in Northwest Europe, especially the Netherlands, Ireland and Scandinavia, though research suggests that dairy farmers carrying this gene variant probably originated in central Europe. (Source)

Back to the original question: Why would someone experience "lactose intolerance" symptoms after being dairy-free for a short period?

I'm not a doctor, nutritionist, or scientist — but I think the reality is you were alwayslactose intolerant and you just didn't know it. I've worked with dozens, if not hundreds, of clients who after they cleaned up their diet, realized things they thought were "normal" actually weren't. A common saying among them is "I had no idea how sick I was or how awful I really felt until I knew what it was like to feel well and thrive."

Many of my clients used to experience bloating, gas, diarrhea, heartburn, and other unpleasant things that they thought were "normal" and then, after switching to a plant-based diet, realized that wasn't normal and they didn't have to experience those discomforts.

A few of my clients had such poor diets before that it was a steady onslaught of unhealthy foods. Their body couldn't even begin to wade through all the garbage. It was sending out distressed smoke signals, but it was too overwhelmed to be specific. "Emergency! Hit the Kill Switch!" was all it could muster on overload. There was just no room for a subtle warning.

For example, the body was freaking out over the processed white bread, gobs of fat, cheese, burger, oil, and sugary condiments being shoved in all at once (a la "burger and fries"). It was too much — too many triggers. It wasn't until we cleaned up the client's diet that we were able to really figure out what food intolerances existed, if any.

Once you've adopted a whole foods plant-based diet and given your body a break (and time to heal, repair and restore) it starts becoming clear just how bad "bad food" really is. Your body starts recognizing unhealthy food as the toxic substance it is. It recognizes garbage.

This has certainly been true for me. There was a period of my life where I was cycling through the drive-thru 2 and 3 meals a day. Yet now, after years of eating a plant-based diet, I can't stomach even the tiniest bit of oil without GI problems following. Vegan "junk food" like Boca burgers do a nasty number on me (and even those, I once ate with abandon!).

My body has become that attune to garbage. The longer you eat clean, the more your body will reject unhealthy foods— all the more motivation to continue to make good choices.

I can't count the number of times my clients thought they'd go cheat.. treat themselves... to some super unhealthy food they used to love. (You'd be surprised how often this is a dairy product and not a meat one!). Then the email comes. They feel awful. They can't leave the bathroom. And the worst part?It didn't even taste as good as they remembered, anyway.

Related post: How to Give up Cheese and Dairy (and why it's so addictive)

Lastly, if you're looking to eat a plant-based (or dairy-free) diet but don't know where to begin, try our meal plans. They're perfect for individuals and families.