Herbie of the Week: Sheldon 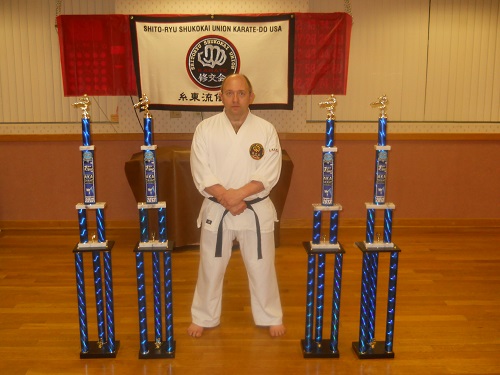 I'm stoked to introduce Sheldon, our butt-kicking Herbie of the Week. Sheldon is a retired NYPD captain and 9/11 first responder. During his police career, Sheldon was decorated in the line of duty 60 (SIXTY!!) times, yet it was his diet — not his public service —  that almost cost him his life. After saving another life (his own!), Sheldon went on to become a four-time National Karate Champion at 53!

HH: I'm in total awe. I don't know where to begin! You're so impressive. Hmm.. Let's talk about your career as a police officer. Tell us a little more about that.

I am a retired NYPD captain and 9/11 first responder who was decorated in the line of duty sixty (60) times. I had one of those exciting careers that little kids dream about. Despite all the life and death experiences I encountered over 21 years, it was my diet that almost killed me.

Prior to becoming a Police Officer, I was an Exercise Physiologist. I have always maintained an extremely active lifestyle being involved in the martial arts since I was a child and also being an avid, although not very fast, runner.

HH: What was your diet and health like before adopting a plant-based diet?

Like many Americans, I ate the traditional Western diet and hid behind both the "everything in moderation" routine and "I exercise, so how bad can it get?" rationalizations.

Midway through my police career, I was diagnosed with high cholesterol and prescribed a statin. Although it hadn't sunk in yet, this was my first lesson that as Dr. Campbell has been known to say "you can't outwork a bad diet."

By 2004, after a routine physical, it was found out that I had a 90% blockage in one of my coronary arteries. I could have easily found out in the very worst way and considered myself lucky to get by without a heart attack and having just a stent. I started to make some changes which included following the traditional "heart healthy diet."

I was retired shortly afterwards, being declared disabled because of my coronary artery disease. By 2008, I found myself back in for another stent (despite my "heart healthy diet") I cried on the gurney as they wheeled me in. The nurse said "don't be afraid" and I replied "I'm not afraid, I'm humiliated — I used to be an Exercise Physiologist and this stent #2."

HH: You eventually wound up in the hospital, but not from the stents or related complications. Tell us a little more about that and the effect that experience had on your journey to a plant-based diet.

In October 2009, I was walking my dogs when a driver ran a stop sign and plowed into me, causing me to land unconscious in a ditch with numerous broken bones and having been struck in the leg, unable to walk by the end of the day. I was removed from the scene to a trauma unit. Strange things go through your head as they are cutting your clothes off, and I actually thought about extreme weight gain without being able to exercise.

I had just started working as an Exercise Physiologist again at a major health insurance company in a disease management program (turn your weaknesses into your passion and help others while also helping yourself).

By this time, I was also on a ton of other medications for blood pressure and stent-related issues. I resolved to never go back on the operating table again and after doing my own rehab, I was walking then running again and doing plenty of martial arts. 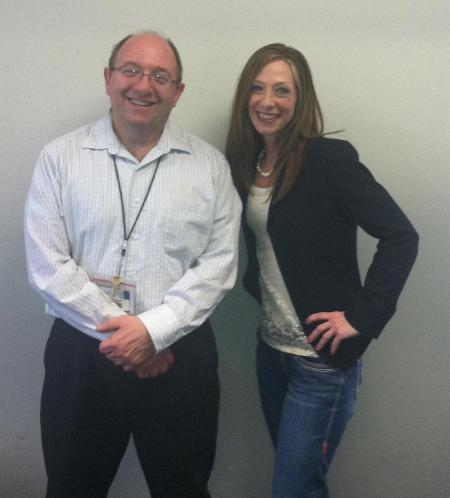 Sheldon with RD Kelly B., part of his "secret weapon" support system.

HH: After doing your own rehab? You really are amazing! But I have to ask — what finally shattered your "everything in moderation...but I exercise" mentality? I guess what I'm asking is, how did you find your way to a plant-based diet after all this?

I struck up a friendship with a co-worker/registered dietitian by the name of Kelly B., whom I shared my "secret of heart disease" and sought dietary counseling with as I came to grips with that exercise is not a stand-alone (hey, I was a 3:11 marathoner and got stented!) and that "you get what you eat for and get what you train for."

My doctors started noticing very positive changes and I asked Kelly about reversal of disease through nutrition. She mentioned Dr. Esselstyn's work.

My RDs had the guts and common sense to take a hard look at the science behind a whole food plant-based diet and teach me how to eat properly. My wife and I owe them both a lot. They also practice what they preach and they inspire me by example.

HH: You mentioned previously that you were a grandfather. How has did your family react to your dietary change?

My wife, Susan, was extraordinarily supportive and together we explored websites like the Happy Herbivore for new ideas. I found support reading about the "Herbies of the Week."

HH: What do your doctors say about all your changes? Are they shocked by your results?

My doctors, much to their surprise, were shocked at the changing blood pressure and cholesterol measurements  My cholesterol, once over 320, was down in the 130s. They actually started taking me off medications, something they said they "never do."

HH: You have always been very active, fit and athletic — but how did you get involved with martial arts and karate?

Needing something to motivate and celebrate my recovery from the car accident, I decided in October 2010 (one-year anniversary) to enter a karate tournament and chose the New York State Martial Arts Championships, my first competition in over 20 years.

Much to my surprise, I finished second and decided to pursue other competitions with Dominic, Kelly and Susan as my "secret weapon" support system and meal planners.

In 2012, I was the number one ranked black belt competitor in New York State, as determined by nytournaments.com for Division 37 (age 40 and over — I'm 53!). I was in Chicago in February 2013, where I won four first place trophies at the American Karate Association Grand Nationals — the United States National Karate Championships, making me a four-time National Champion in the 50-59 age division — powered by plants!

Now, what's this nonsense about not getting enough protein from a plant-based diet? I look forward to many years of enjoying my grandchildren, family and friends — powered by plants.

UPDATE [Feb. 22, 2013]: Just wanted to give you a brief update since we last had contact with each other —  I'm the karate kicking whole food plant-based eating retired police captain. I am featured in Sports Illustrated Faces in the Crowd-February 25th edition —  not bad for a 53-year-old grandfather powered by plants.

It's important to highlight people like Kelly, Dominic, Rip Esselstyn and Lindsay, who will lead us into the future and continue the great work of T.Colin Campbell and Caldwell Esselstyn. Thank you so much for everything you do.

And here's what one of Sheldon's RDs, Dominic, had to say about Sheldon's journey:

"I'm so psyched that you selected Sheldon Howard as a Herbie of the Week!  No one is more deserving than Sheldon. When he decides to take action, nothing can stop him. His return to health and his ability to perform at a world-class level in the martial arts while mainly fueled on whole plant foods is quite inspiring."