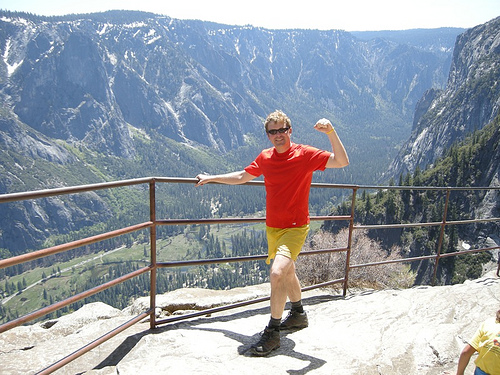 A few months ago, Scott started experiencing mild back pain during prolonged activity — running, snowboarding, etc. Not wanting to worsen the issue, he sought professional help to correct it. I too have been dealing with some postural issues and muscular imbalances (from all the years I ran around in high heels with a heavy purse or laptop slung on my shoulder), so when we moved to Tahoe, we both started working with a local fitness expert.

Neither of us knew TJ previously, so as the weeks have gone by, we've been getting to know each other better — sharing and learning new things about each other.

Somehow my minimalist lifestyle came up during a recent session. I can't remember what provoked it exactly, but the conversation gave me a new perspective and honesty I had never came to terms with before.

I recalled the decade before my decision to be a minimalist — and how more money never made things easier.Allow me to explain:

When I was 20, I was making $8.00/hour at my part-time job (a little more than minimum wage). I was in college, and like most coeds, I struggled to make ends meet. It was a challenge to scrape enough money together to pay my bills each month. I was always riding on fumes in my car. My bank account was always just a dollar or two above $0.00 come payday. I even overdrafted a few times and invariably had those tear-filled embarrassing phone calls home, asking my parents for money. (Who, bless them, always helped me out).

Then when I was 22, I finally made $10.00/hr. I'd left South Carolina after graduation and moved to Boston for law school. I'd applied to a few part-time jobs and nearly fell over when I was hired at a retail store and the manager told me the starting pay was $10.00/hr. It took everything I had to contain my excitement.

I floated the entire way back to my apartment. "Finally! I was rich!" I thought. I'd also gotten rid of my car when I moved to Boston since I could walk everywhere or take the subway. Without the added expense of a car and gas, and now the bigger paycheck I thought, "All my financial troubles are OVER!" and let out a sigh of relief.

Except they weren't. $10.00/hr. didn't cut it. It only took a few weeks for that euphoria to wear off and for me to realize I was just as broke as I ever was. I was still struggling to pay my bills — maybe even more so than ever before because city life was all kinds of expensive. I was falling deeper and deeper into debt, forced to put things like groceries on my credit cards so I could eat.

So I started looking for paralegal work (I thought, "heck, if nothing else, it would be great for my budding lawyer resume!") and about 6 months later, I finally found a position that paid $12.00/hr. I was over the moon. Not only would I get great hands-on experience, all my financial problems would be over!

And for a short while, they were. I seemed to be able to pay my bills with more ease. Come payday, my bank account wasn't negative. I was living more comfortably, until one day, I wasn't anymore.

By the time graduation came 2.5 years later, I'd found myself right back where I'd started. I was struggling. Only now, I was also married, so we were both struggling.

There had been some setbacks, true — but nothing substantial. Scott had moved to Boston so we could be together (rather than in an ongoing, long-distance relationship) and it took a few months for him to find work, so we had fallen a little in debt, but things had greatly improved once he had a paycheck.

Our landlord had also raised the rent when Scott moved in, as he was entitled to do, but the raise was barely 10%. The wedding had cost us some money, true, but it was modest and humble (we only spend about $2,000-$3,000 total), and so forth. In those two years, I'd also received two raises and was making $13.50/hr. by graduation. The most I'd ever made! Yet I was constantly checking the couch for change to cough up subway fare. I was so broke, and I couldn't stand it.

I can vividly remember having a meltdown saying to Scott, "I'm married. I'm 25. I'm a lawyer. I'm tired of living like a broke college student! I lived better in college!"

And for a little while, they were. Then my student loans kicked in.

I was in the worst financial state of my life. The struggles I had in college seemed like bliss in comparison.

I was making about $563 a week before taxes — about $2,250 a month before taxes. My student loans? They were about $1,750 a month. There was literally no money left over to live on. I was totally dependent on my husband, except Scott didn't make nearly enough to cover all our bills and expenses. We were drowning in debt.

We considered moving to a less expensive place — we knew Boston was expensive, but it quickly became apparent that if we moved somewhere cheaper — to another city, etc. our wages would severely drop, too, but my student loans would not.

So Scott and I kept looking for better paying jobs, and when Boston didn't have any, we looked at other cities (bigger city, bigger paycheck) and found our way to Los Angeles (the first time). I was hired at $18.00/hour. We also found a cheaper apartment.

Little by little, we got control over finances and things started improving.

After I passed the bar exam and I was officially an attorney, I was bumped up to $20.00/hr., then $22.00/hr. a few months after that, and finally my highest pay ever: $24.00/hr. Despite the big paycheck, it wasn't easy. The loans still ate me alive, but we were finally living better than how I lived in college.

Then reality hit us hard again. I was laid off and Scott's work was laying people off in droves. We knew he was going to be in the next wave. What were we going to do?

We left LA and moved to New York City since one of Scott's friend's worked at a company there and felt pretty confident he could get Scott a job. (He did).

But our problems were hardly solved: Scott's salary in NYC was lower than what he'd made in LA and the cost of living in NYC was much, much higher than LA too. Plus, I was unemployed. It didn't look good.

And that's when we became minimalists. It was forced on us, but forever changed our lives.

We moved into an impossibly small studio apartment — too small for a couple and 2 dogs, but we made it work. We only had room for our bed, couch, a bookshelf that acted as a privacy wall, a 2-seater table, and a small computer desk. Our personal belongings and clothes were also drastically reduced since everything had to fit in one small closet plus a wardrobe. 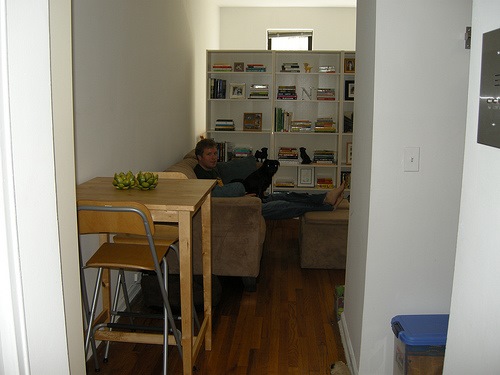 [Editorial note: Looking back at old photos, I think we could have gotten by with even less, but that's the beauty of a journey: continual progress. Hindsight reminds us there is always room for improvement!] 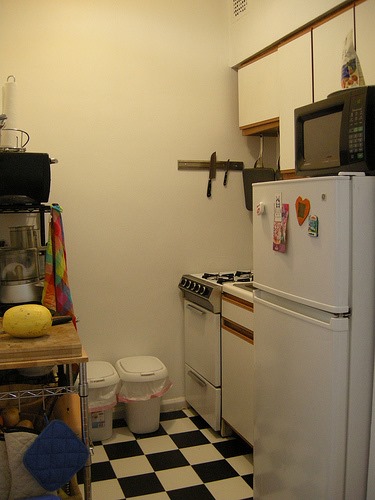 Here's the kitchen I wrote HHC in!!

We also pinched every penny. We scraped and scraped and scraped some more. Meanwhile, I'd decided to give up my lawyer life and focus instead on Happy Herbivore. I started freelancing to help pay the bills (aka, my student loans) and went back to making a little less than $10.00/hr.

Yet we were getting control of our finances. We were chipping away at debt. Despite having such a drastically reduced income, and fewer material possessions, we were much happier and oddly, more financially sound.

Of course, when I was talking to TJ, I didn't go into this much detail. Instead I said,

TJ's assistant was nodding along the entire time I was talking and when I finished he said, "Yes. It's because you were increasing your lifestyle along with your pay increase."

I said, "You are exactly right. I was upgrading my lifestyle with my paycheck, thereby keeping myself in the exact same position."

As I realized in that small apartment in New York, with every "promotion" in pay, I should have kept living my previous lifestyle. Even though I was making $10/hr., I should have acted and lived like I was still making only $8/hr. THEN I'd have found that financial freedom I so desperately sought.

The solution for me was to live with less. I had a smaller apartment, a smaller paycheck, less "things" and more happiness. (And less debt! And less financial stress!)

It is a daily struggle for me not to revert back to my old lifestyle, I freely admit that. Now that Scott and I are finally out of debt — at least personal debt (my law school loans aren't going anywhere), and I'm making more money than I did in New York a few years ago, we have "extra" income, and that "extra" income makes me want to "upgrade."

I'm not saying I never splurge or treat myself — I do.We go out to eat with friends. We buy ourselves new things when we want them, but with so much more awareness.

It wasn't as if Scott or I landed a new job, or a promotion, and said "Okay, let's go get a bigger apartment." or "More money! Let's go out to eat more." Instead, it just happened. The lifestyle increased, seemingly unknowingly with the pay.

It can happen to anyone. It's not a lack of willpower or a sign of weakness.We live in a consumerism society — keyword: Consume. We are told all day, every day, that bigger is better, that whatever we have is not enough. We're faced with the message that we need more, should seek more, that we should strive for more, at every turn.

It takes a lot to rage against this. I still fight it. My hope is in sharing my realization — and my journey, that you can find a little more relief, too.

For more information on minimalism (including downsizing and finances), check out my Minimalist Monday book series!