How To Make It Work In A Mixed Household 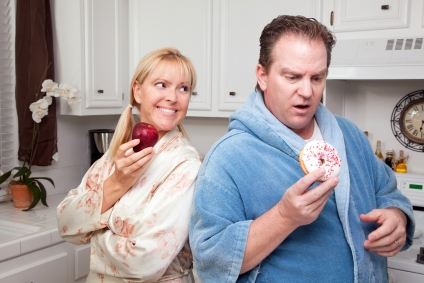 This question bubbles up in my inbox often — if the whole family isn't plant-based, how do you make it work?

When I was vegetarian and Scott wasn't, we agreed the house would be vegetarian — meaning Scott could eat however he wanted outside of the home (i.e., at work, at restaurants), but at home, our meals were vegetarian. Scott did most of the cooking back then, and he was fine preparing us meatless meals.

Then when I went plant-based (vegan) about a year later, Scott said I had to help with the cooking since the only vegan meals he knew how to make were salads, stir-frys, and pasta. (Plus reheating a frozen veggie burger). Good thing too! Otherwise happy herbivore wouldn't exist ;)

Since Scott wasn't much of an egg eater and he didn't mind soy milk, out the milk and eggs went with my dietary change. Scott really loved cheese, however, so it remained in the fridge (though I constantly bought vegan cheeses hoping he'd warm up to them — and he did!). All the meals we made were vegan, but sometimes Scott would add cheese to his. Eventually, Scott gave up meat, and then he gave up cheese and committed to being 100% plant-based.

But that's just what we did and how it unfolded in our household. Every family and situation is different, so what works in your house might be different...

Anyway, wanting you to have suggestions outside of my own experience, I polled the Herbies on Facebook asking those who lived in a mixed diet house how they made it work.

Over 100 responses poured in and here are some of the highlights. There were three clear "solutions" — all food prepared in the house is plant-based (my and Scott's solution), each person cooks their own meal but share sides and still eat together, and cooking two separate meals each night. A lot of people are also using the meal plans, especially if they are the only veghead in their house.

"I'm a single mom of two young kids, so they have no choice! They eat what I make when we are home. I let them choose when we go out or if they are with other relatives." — Heather S.

"I take my meal plan and plan similar stuff with meat for hubby. Then I double both the vegan meal, and the meat meal, so the kids can eat both and choose." — Cambret N.

"I cook vegan dinners as well as main dish meat dinners, and I eat the sides. I have been experimenting with "veganizing" recipes as much as I can. I made our traditional meat lasagna a veggie one, for example. They didn't ask, and I didn't tell" — Caren C.

"I'm veg, he's not. We agree on the side dishes, I cook my main dish and he cooks his. We time our cooking so we can eat together. this works for us very well. We get to spend time in the kitchen together, and we get to eat together." — Julie W.

"If you are alone in your herbiness amongst a house full of omnis like me, get Lindsay's individual meal plans and double, triple, etc. the dinner recipes. Serve it as a side for a veggie serving with whatever else the rest are having. Her plans are truly quick and easy. It is worth the very little extra time and expense." — Annette D.

"Mutual respect. We cook together. Some meals are all vegan. Some meals he adds meat. But I will NEVER tell my husband that he cannot cook what he wants to eat in the home that we built together. The first 30+ years we were together I was a meat eater too, it's not like this was a "pre-existing condition" that he was aware of." — Sue B.

"I bought my husband a broiler pan, so now he buys and cooks his own meat. Otherwise, he eats whatever I make and is learning to like more veggies and grains! Now if only I could get him to WASH the broiler pan...." — Shannon C.

"Me, husband, youngest — vegan. Eldest — disgustingly carnivorous. Solution? Pushed him into student digs and downsized so he can't come back. This is all completely true!" — Nicola L.

"We kinda do a 50/50.. sometimes I'll cook a few things I know they will eat... and other times she makes stuff for them, and I do my own thing... I've never tried to push this lifestyle change on my family." — Russ I.

"Hubby makes his own breakfast and lunch. We bought a little George Foreman grill that is to be used only for his chicken or burgers." — Aimee D.

"I am vegan (50% raw) and my husband is mostly Paleo. He cooks all his meats on Sundays and adds them to the meals I prepare throughout the week. It blends flawlessly." — Jules B.

"I only prepare dairy-free and meat-free meals at home. If my handsome husband wants meat, he buys it and cooks it himself. The kids eat the vegan lunch I send to school but eating out they choose EITHER meat OR cheese" — Winnona S.

"Only Herbie in a house of 5 people. I get one shelf in the fridge, one in the freezer, two shelves of the pantry...and I keep separate pots & pans." — Gina C.

"I'm the only vegan in a household of 8. I knew it was going to be difficult, so I took it upon myself to just cook for everyone. Who's gonna pass up an already made meal?" — Christine A.