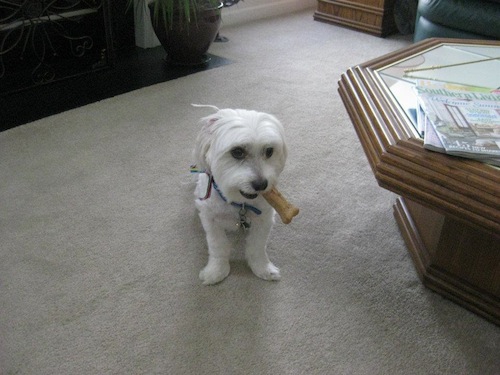 Any time I speak at conferences or immersions, the one question I seem to get over and over is "I love this! I'm a believer but... how do I convince my... (family/friend/partner/etc)."

My parents' dog, Nicke. The last family member that's not plant-based, but I'm working on him.

I led the charge in my family. I've written about my vegan husband before and his reluctance at first. My sister Courtney discussed her journey to a vegan diet and then how she went from a junk food vegan to plant-based. Perhaps most notably: my parents who went plant-based in January following my Dad's heart attack. I have also inspired change in numerous friends who are now vegan, vegetarian, and more mostly plant-based flexitarian. If you follow me (personally, not Happy Herbivore) on Facebook you've probably been seeing my updates about 'converting' my friend Jon. It's a work in progress but I'm definitely rubbing off ;)

Point is, I've had a lot of success converting people and so can you.

My short answer is always, "Have you watched Forks Over Knives together?" Forks Over Knives is a great documentary for a number of reasons, but what I like about it most is that it is so clear-cut and science-based. Unlike other "vegan" documentaries you're not dealing with the animal torture, which causes most people to tune out (sad, yes, but reality).

I find pretty much everyone is interested in improving their health, losing weight or avoiding diabetes and cancer, so Forks Over Knives is right up their alley, focusing on their interests, which brings me to my first piece of advice:

In my post about how to talk about veganism, I suggest being conscious of who you are talking to. The more you know about the listener, the better you'll be able to tailor your explanation and reasons for being plant-based in a way that they will understand and most importantly, accept.

For example, I know that my uncle, a hunter, would tune out anything I said if I started off on animal rights issues. However, he is very health conscious, so if I explain my choice to be plant-based (and why he should give it a try himself) from a health perspective, he is more apt to listen to what I have to say and with a lot less judgment and preconceived notions.

Another example. A girlfriend of mine had been a vegetarian for years out of a love for animals. I tried to convince her six ways from Sunday that a vegan diet (no dairy, no eggs) was far more compassionate, but I wasn't getting anywhere. Mostly because she'd say, "but I love cheese so much! Lindsay, how do you live without cheese!"

Anyway, one day, I mentioned in passing, "you know your skin would clear up if you'd just stop eating dairy." Truth be told, I was being sort of snarky about it, but my friend reached across the table, grabbed my arm and said "WHAT! WHY DIDN'T YOU TELL ME THIS BEFORE!" She'd dealt with embarrassing acne for years and within a week of going dairy-free, her skin was clear.

Another example: A friend's husband ate junk and fast food as his only food group. He refused to believe any of the food could be bad for him, or doing any kind of damage, because he was so fit and trim. I explained to him that just because someone looks good on the outside, doesn't mean they are healthy on the inside. After all, several professional athletes die each year suddenly from a heart attack, caused by heart disease, which is only caused by diet. Even the "fittest" can't escape poor food choices. It took only a Google search "professional athletes die heart attack" with hundreds of news results to change his mind instantly.

One more example: A friend recently lost a parent to cancer. My friend is deeply sad about the loss, but also very concerned she might have the same fate. I talked to her about diet and it's relationship to cancer. I told her, "genes load the gun, but diet pulls the trigger. You don't have to die from cancer too." She didn't believe me at first, but I encouraged her to do her own research. I sent her a few studies and waited. She came around :)

So, know your listener.

My next piece of advice is my all-encompassing advice for anything and everything: Lead by Example. 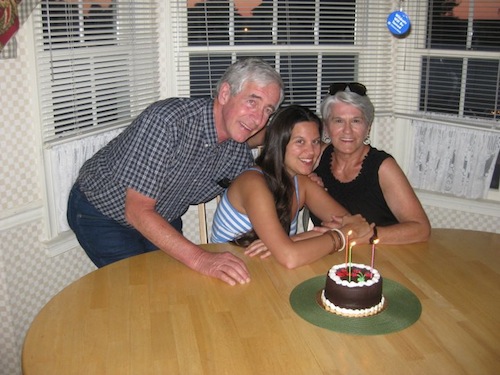 Last week I posted a picture of Scott and I at a baseball game on Facebook. A friend left a comment begging for me to share my secret for how I get my glow and complexion. I wrote back, "no oil, low-fat whole foods plant-based diet." Because that is my secret. I am frequently stopped by strangers asking how I stay trim, what's my secret for long, shiny hair, etc. It all comes back to my diet and I tell them that.

If you're looking and feeling your best, people are going to notice. And they're going to want to know your secret. Tell them :) If you're loving life and having a great time and happy as happy can be, people will see it, want it, and ask for help to get it.

Next piece of advice (this is particularly true with friends and coworkers) — Spark a Curiosity.

When I first went vegan, most of my friends were like "sure, okay, whatever floats your boat" but as time went on, they had questions. This was especially true with my coworkers. After everyone realized it wasn't a "phase" or some "crash diet" — that I was sticking with it (and loving it!), they were curious.

My coworkers and friends started asking me questions and scoping out what I was eating at lunch. This gave me the opportunity to kindly inform them why I did what I did and help create a positive image about this lifestyle. Often one answer would lead to another question, and I could see the gears going in their heads.

Going back to Jon, who I mentioned earlier, one of my first conversations with him was him asking me, "Where do you get your protein?" I said, "the same place your protein gets its protein." Jon was baffled and surprised to learn that meat didn't eat meat. It had never occurred to him that the protein he was worshiping in beef was grass-grown and that the animals didn't need animal protein to grow protein. That was a big curiosity spark.

Show them how delicious and amazing plant-based food can be. When I first went vegan, I brought a basket of muffins into the office but no one would try them. I remember trying to hand one off an a coworker saying "oh no, I'm not that adventurous." The following week I dropped a banana bread (the one from HHC) off in the break room before everyone else arrived. It was gone by lunchtime with a buzz going around the office about the "incredible banana bread" and "who brought it in?" I sent out an office-wide email with the recipe. NO ONE could believe that they loved something that was vegan AND whole-wheat and fat-free.

Everyone's mind changed that day. Before long, people were hitting me up for recipes, asking me to bring food in. At lunch, people would ask for a bite to taste whatever I was having. Perhaps my favorite day was when a male coworker was going up and down the hall "looking to see who had ribs" (he'd been the one to reject my muffin) and was shocked to realize I was the girl with the tasty BBQ smell. It was my Gardein riblet that got him salivating  After I gave him half, he brought it to work almost weekly.

By the time I left that job, one woman had committed to eating vegetarian until dinner and everyone else was eating vegan and vegetarian meals regularly. What a difference from rejecting a muffin!

Remember, it's a marathon... slow and steady wins the race.

Lead by example. Educate (but don't preach) and feed them. And when they trying something, thank them.