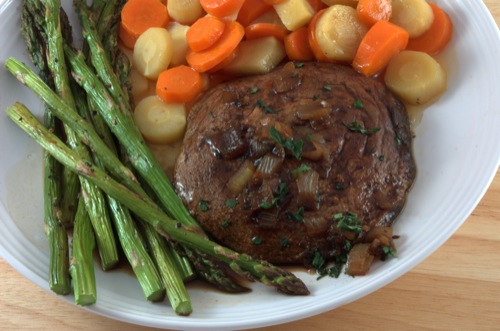 Q: What is the reason for not listing sodium in the list of nutrients?

Sodium content varies so dramatically by brand that we can't provide a safe estimate — and I’m not comfortable giving information that isn’t absolutely accurate. For example, if you use a brand different than mine, it could easily be off by 1000 mg. If you have sodium concerns, you should plug everything into a calculator using your specific brands for a safe, ballpark estimate. Plus with whole plant foods (fresh foods), there shouldn't be much sodium at all (compared to, say, processed foods).

Q: What are cremini mushrooms?

Q: Do you know a healthy or vegan substitute for sweetened condensed milk?

I’ve seen recipes for making it online, but I’m not sure if a commercial brand exists (I try not to buy “substitutes” outside of almond milk and almond yogurt for a treat). I don’t think there is anything special about “condensed milk” re: baking, except that it’s sweeter than milk and sometimes thicker, so I think any plant-based milk would work (creamier the better, i.e., choose almond over rice milk) with added sweetener.

Q: Is it possible to be allergic to nutritional yeast? If so, is there a substitute for it?

I’ve never heard of a nutritional yeast allergy before, but I suppose it's possible. It might also be the brand you’re buying. Like all commercial products, your nutritional yeast could be contaminated with something to which you are allergic. For example, a friend of mine that is allergic to nuts can only buy one brand because another brand is made in a facility that has tree nuts. You could try another brand and see if you react the same.

For more information about nutritional yeast, see my post, “What is Nutritional Yeast?"

Q: What is your advice for those that do not have the ability to eat mostly organic?

A: Don’t worry about it :) I lived on an island for a year where there were little to no organic choices — and the few organic choices they had were well beyond my budget. I’ve also lived in small towns up in the mountains and other remote areas. Again, there were few organic choices, and I haven’t grown a third eye or anything. If you have access to and can buy organic, do it. If you can’t, don’t beat yourself up about it. Do the best you can. Eat a whole foods, low-fat, plant-based diet and wash everything really well.