Body Image: You Can't Please Anyone 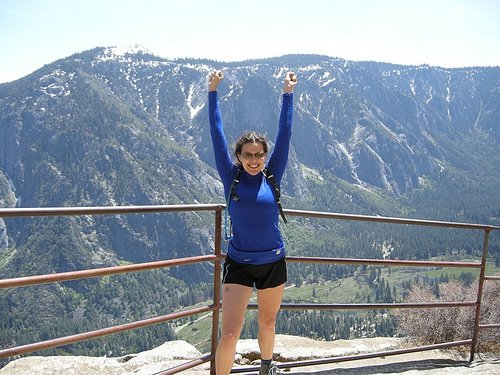 When I was waiting at the salon earlier this week I picked up the August issue of Glamor which boasted an interview with Mila Kunis.

I've always thought Mila was really cute, laid back and funny; the kind of girl I could be friends with, so I was interested in reading her interview.

This part really stayed with me: On having to lose 25 pounds for her role in Black Swan… Glamour: Your body was talked about so much during the wave of press for Black Swan, in which you played a rail-thin ballerina. How do you feel now? Mila Kunis: This is my normal body. It’s not 98 pounds. God, I’m probably 25 pounds heavier in muscle mass and weight at this point. What was crazy was, when I was shooting Black Swan, everyone was like, “Gosh, you’re really too skinny.” Then my weight started bouncing back and they’re like, “She looked better when she was anorexic-looking.” You can’t please anyone! I wanted to hug her and high-five her saying, ain't that the truth, honey. The very next day, my friend Chef AJ was featured on VegSource talking about her recent weight-loss. There were so many things I loved about the article, but this was my favorite. AJ says:

My weight had been stable for at least the last 15 years and so I figured all was well. That is, until I started teaching health and wellness. Apparently, there is one weight that is considered acceptable for regular folk and another for people who are in the public eye.

I actually shot my arms up in the air and said "hell ya" when I read that, and then sent the quote to AJ with the caption "YES! A THOUSAND TIMES YES!"

In a past minimalist post about focusing on yourselfI mentioned that I'd Googled myself only to find forums and websites where people bashed me. Called me ugly, fat and stupid. Claiming I photoshopped myself and the like. I'm not saying I have Heidi Klum's body but I'm not "fat" by any stretch of the definition. Not that we should call anyone "fat" ever...

But that's not the point.

A few hours after the VegSource article posted AJ called me in tears. People had left so many mean and hateful comments about her body on various websites and forums. My heart went out to her as I told her about what Mila Kunis said.

I've never had an eating disorder, but I'll admit that when I see pictures of gorgeous women like bikini-clad Brittany Spears or Mila Kunis being called fat I think "well if SHE is fat, then what hope is there for me?"

Now, I'm no saint. I've judged celebrities in my mind. and maybe to some of my friends. I am not safe from myself either. I've whispered hateful words to my thighs. Yelled at my abs. Told my arms I hated them, and cried over cellulite that won't go away...

And it's gotten worse since I became the Happy Herbivore.

It would have been so easy for me to say to AJ, have some self-esteem, girl! Ignore what the haters say! Haters gonna hate! but I know from my own experience just how hard it is to really swallow it. It's never easy hearing your fat.

And so, with nothing else to say, I finally made a confession to AJ that I so desperately needed to make: I get nervous when I go to book signings or conferences or I'm spotted out in public. I don't have stage fright. I worry that someone will take a bad photo of me and blast it on the internet. I worry that someone will come up and tell me I have fat legs, or I'm fat -- say the things in person that they say online.

Then right in that moment I remind myself that my goal is progress not perfection. and if someone is looking for a perfect role model, that's not me. I'm not perfect, but I'd love to be. I am constantly trying to better myself, improve myself, and that's all I can ask and hope for.

And I try to judge myself and others less because I find I love myself more if I do. Nothing good has ever come of me judging someone else. Does calling someone ugly or fat make you feel better about yourself? No. Of course it doesn't. Gossiping may be fun, but it never makes you feel warm and fuzzy.

I also remind myself that behind every body is an untold story.

Take a moment today to tell yourself you're beautiful - because you are. AND PLEASE tell someone else too. Give a compliment. It may change their day or their life!

Final note: AJ asked "why are people so mean? Will bullying ever stop?"

Our mutual friend responded: "No, it's part of our evolution, it's been around since we started developing language- you should read The Moral Animal to learn about why people bully - it has a lot more to do with an instinct for some people than anything else. Which is why I just don't care about it anymore. I know what those people are doing/why and what it serves them. I don't have to get in their way, I just have to ignore them, and live my life the way I want to live it - like I said screw em and move on. Think back to my post on dealing with negativityand how 99% of the time, it's about the attacker, not the attacked. STAND TALL.