I'm obsessive about knives. Right after Scott & I were married, he spent one of our gift cards on a rather expensive knife. I was furious, I kept thinking of all the other things we could have bought instead... until I used it. It changed everything for me -- my entire experience in the kitchen changed! Cooking was so much more enjoyable. Almost 6 years later, I still have that same knife and it still looks and works like new (though I've had it sharped a few times).

A few months ago Scott wrote a post about the danger of using cheap knives, but he did provide links to knives that were strong, durable, and still affordable. I actually bought the 8-inch Victorinoxwhich was only $26 to test it out and loved it (They have a 6-inch for $18). They're not AS great as my other, more expensive knives (namely, these inexpensive ones have a plastic hand attached to a blade, rather than it being one unit of metal), but they are really good and well worth it! I highly recommend! 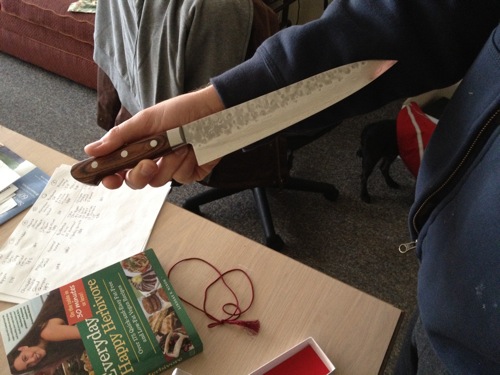 Note - Scott is the one holding the knife in this picture.

Anyway, several weeks ago I received, perhaps the nicest knife I will ever own, a Togiharu hammered texture Damascus Gyutou knife. I instantly fell in love! It is not only beautiful, but very well made. Actually, it's handmade! woah!

It is so sharp too - I won't even let Scott use it!

The weight is perfect for a quick chop of veggies and everything else. 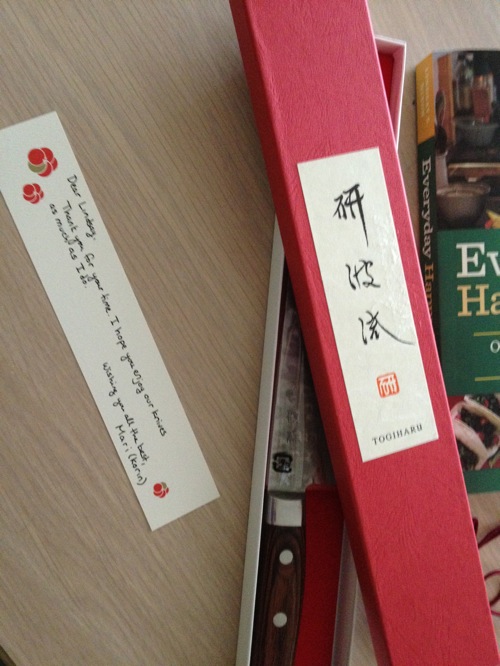 It came in a long red box, which I still store it in because it makes me feel like a head chef every time I have to open the box to get the knife out.

Also, I have to give props to the company, who sent me a handwritten note along with my knife. It's the little things that matter to me, and I'll recommend them forever now. Not just because they make amazing knives, but I think gestures like that say something about the company and the people who work there.