Herbie of the Week: Kay

Last week we met Deanna, who went off her blood pressure medicine and has more energy now than ever. This week we met Kay, whose birthday was yesterday (happy belated!) and has lowered her cholesterol and lost almost 40 lbs!

HH: Tell us a little bit about yourself.

I turned 74 years old on the 28th of February. In January, my husband and I celebrated our fifty-fourth wedding anniversary. We have four children and ten grandchildren. In 2009, we sold our Kentucky farm. Since then, we have lived full-time in our Airstream Travel Trailer . . . traveling, volunteering at national parks or recreation areas, and visiting family and friends. The photo below is of me standing in the kitchen area of our 25’ Airstream. 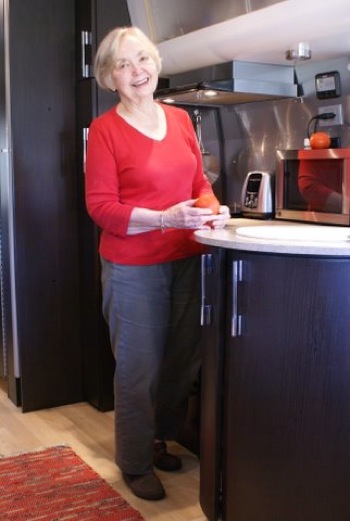 HH: How did you find your way to a plant-based diet?

I began my plant-based journey on August 23, 2011. My total cholesterol was 278, my energy level and endurance were low and my jeans were so tight I felt like a stuffed sausage. I decided to make a big change. My daughter, Jennifer, has been vegan for ten years. I was influenced by her commitment to healthy eating. Several weeks later, in the New York Times, I saw an article about Lindsay’s cookbook, Everyday Happy Herbivore. I watched her on-line cooking demonstration, and joined the HH community. All of these helped me find my way.

HH: Have you experienced any positive benefits since making the switch?

I lost 39 pounds and have more energy than I have had in many years. In November, I had my blood tested and my cholesterol was already down to 171. I feel better, my husband says I look much better, I am healthier, and I know that these improvements are a direct result of my plant-based diet.

HH: Has weight and weight-loss always been a struggle for you?

During my adult life I have lost weight using the Weight Watcher’s plan or by counting calories. However, for me, the difficulty came after I reached my goal. Each time, after reaching my weight goal, counting points or calories became too much work, and I gradually went back to eating traditional foods of the deep south . . . meat, potatoes, bread and sauces or gravy. Eating a plant-based diet requires no calculations. It is not a weight-loss plan. It is a life-style choice that often results in weight loss. I love it!

HH: When I travel to conferences, I find most of the attendees are an older crowd, but online it's a much younger crowd. What is your perspective and how do you feel as a "senior" Herbie and member of this community?

Whatever a person’s age, I believe he or she is most likely to share similar problems, situations and life experiences with someone who is of a similar age. Thanks to Lindsay, several retirement-age subscribers to her HH blog have contacted me and I am getting to know them by email. Just as I am enjoying being a part of the overall HH community, I look forward to the possibility of helping to develop a HH Senior Branch that will be of special interest and support to others in my age group. (HH: If you want in on this email list, email me & I'll put you in touch with Kay).

One of the many wonderful things about this community is that everyone, no matter what his or her age may be, is open to learning and sharing with each other. Lindsay is just a couple of years older than my oldest grandchild, she amazes me with her knowledge and perception.

HH: Do you have any suggestions about how people can get together and promote the vegan lifestyle?

From what Lindsay has shared on her blog, this community of Herbivores continues to grow. Eventually, it may be possible to have state or community chapters that will not only come together on the Internet, but also actually meet for potluck gatherings or sponsor cooking demonstrations.

Thank you Kay for sharing!