Herbie of the Week: Deanna

Hi Herbies! Last week we met my friend Pam, who decided against gastric bypass surgery and lost 67lbs with a plant-based diet. This week we meet Deanna, who, along with her husband, is happier, has more energy, and is off blood pressure medicine!

HH:  You and your husband adopted a plant-based (vegan) diet together. What motivated you?

My husband had a heart attack and a triple bypass 2 1/2 years ago. It was a major shock. We thought we were eating a healthy diet, his cholesterol and other test results from his yearly checkups were always good, and he’d had a treadmill test and other routine screenings that hadn’t revealed any problems. 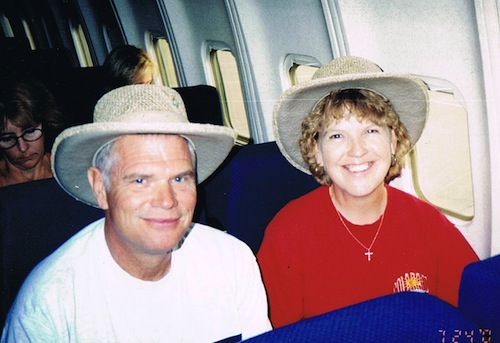 HH: What was your diet like up to that point?

We’ve always tried to eat healthy or what most Americans consider healthy – eating  fruits and veggies, not consuming saturated fats, using 1% milk, etc.  In 2004, I developed a disease of my retinas, which severely affected my vision.  The research we read pointed to possible links tofood additives and meat from animals fed hormones and other unhealthy things, so we began eating more local produce, meats that were grain fed, etc. We continued eating this way until my husband’s heart attack.

HH: What changed after his heart attack?

After the heart attack, he came home on the usual meds given to people with heart disease and we went to nutrition classes at the hospital covering the basics of the American Heart Association diet. By August of last year we had both gained weight and he was starting to feel and look like he did before his heart attack – no energy, pale complexion, etc. It was so frustrating since we were trying to do the right things and didn’t know what else to do.

HH: Other than your husband's heart disease, and your eye issues, did you have any other medical issues?

I had also started to experience problems with my blood pressure and was taking a low dosage medication for it. Both of our family histories have high blood pressure, heart disease and diabetes.

HH: How did you learn about the plant-based diet?

We saw an article on CNN about an interview with Bill Clinton regarding his decision to switch to a vegan diet. The article contained a link to Dr. Esselstyn’s book “Prevent and Reverse Heart Disease”. After seeing the results Dr. Esselstyn’s patients experienced, we decided to give it a try. Although we really thought we would be eating primarily salads the rest of our lives.

HH: What benefits have you experienced since going plant-based?

Switching to a vegan, whole foods, no oil diet positively affected our health faster than we could have imagined! We started to lose weight and within a few weeks the doctor had to reduce my husband’s blood pressure medications by half.

By late December (2011) the doctor took my husband off the rest of his medications, and said I no longer needed my blood pressure meds. Besides the quick results, I think the reasons we were able to make it work were our decisions to make a complete switch to vegan instead of a gradual change and to have an open mind about trying new foods.

HH: Have there been any other positive experiences or surprises?

Since September (2011), I’ve eaten foods I would never have tried in the past.  Most of all I was fortunate to find some of Lindsay’s recipes online, which led me to order the Happy Herbivore Cookbook.

That cookbook truly made all the difference in the world. The recipes are simple, easy to follow, quick to prepare and oil free. The cookbook enabled us to make an easy transition even with my vision issues – I can’t handle long, complicated recipes. After a few weeks, we began to experiment with other recipes as our confidence grew in what we were doing and the types of dishes we preferred. The funny part is that we don’t eat salads now as much as we did before – there are too many good recipes to try!

HH: Is your family supportive? Have any of them been inspired to make a positive change?

My sister and her husband have gone vegan, too. I think what influenced them was seeing that the diet is not nearly as difficult as people think it will be and also how quickly it made a positive impact on our health and energy levels.

Not all of our family are vegans – actually most aren’t -- but it’s been great having my sister and brother-in-law make the switch. They went vegan on January 2nd and are already seeing a difference. They are losing weight, my sister’s blood pressure is lower and they are both experiencing an increase in their energy levels. For the past few years, my sister’s had a problem keeping her blood pressure under 200 even though she’s on multiple medications for it, so this is a significant improvement in her health. To help them get started, I gave her a copy of the Happy Herbivore Cookbook and went with them on their first vegan shopping trip to Whole Foods. Now we help each other as we both experiment with recipes and ideas for different spices or other things to try in them.

HH: Do you have any advice for people hoping to get their families on board?

It’s difficult for me to not encourage everyone I know to go vegan, but I’m sure  the best way is to let the results speak for themselves. If being vegan means we’re happier, healthier, and have more energy, the people around us are going to notice.

I think for most people who want to make the switch to the vegan diet, the most difficult thing is overcoming the widespread misconception that a vegan diet is all veggies, too expensive and/or requires a lot of work. The total opposite is true! Also, sometimes people think they are too old to change but we’re proof that isn’t the case. I’m 57 and my husband is 65. If we can change at this stage in our lives, anyone can.

Making the decision to switch to this diet plan is absolutely the most positive thing I’ve ever done for my health, and without additives and preservatives, our food taste great. The transition has been a wonderful adventure and this is now our new way of life I can’t wait to see how we’re doing when September gets here and we’ve been vegan for a year. We are truly blessed and I’m sure the best is yet to come!

Thank you Deanna for sharing!