What Is Vital Wheat Gluten and How To Use It 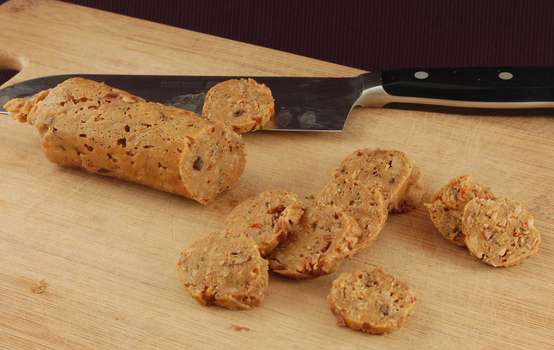 Also known as “wheat protein” and “wheat gluten”, vital wheat gluten is like your normal wheat flour… on steroids. It is made by hydrating the wheat flour to activate the gluten (the main protein in wheat), and then processing it to remove everything but the gluten.

So while the plain flour you use to bake cakes and cookies contains both gluten and starch, the latter has been completely washed away in vital wheat gluten. After the processing, the gluten is dried and ground back into a powder.

What is vital wheat gluten used for?

When the gluten dough is steamed, baked, boiled or otherwise cooked, it becomes chewy with a very meat-like texture – which is what makes seitan (and vital wheat gluten) such a popular food choice in the vegan community.

Vital wheat gluten can also be used as a binding agent, for instance in helping things like mushroom or chickpea burgers hold their shape (and not crumble all over the place).

Another popular use is in improving the crumb and the chewiness of a variety of breads, especially when using low-protein flours such as whole wheat or rye. Just a few tablespoons of vital wheat gluten can go a long way, and the result is a perfect loaf of bread!

Where can you buy vital wheat gluten?

You can find vital wheat gluten in the baking section of most health stores or online. There are two main brands in the United States: Bob’s Red Mill and Arrowhead Mills.

Most vital wheat gluten has a long shelf life of 7 - 10 years if unopened and stored in a cool dry place. Once opened, you should use it up within 6 months or store it in the freezer if you want to extend its shelf life.

Can you eat vital wheat gluten and seitan if you’re gluten intolerant?

If you are celiac or have a gluten sensitivity/allergy, you cannot eat vital wheat gluten. As its name suggests, it’s 100% gluten, which should ring some warning bells. To put it plainly: if you’re intolerant to gluten, vital wheat gluten is just about the single worst thing you could consume. And the same goes for seitan.

Is vital wheat gluten the same as gluten flour?

No. Vital wheat gluten is NOT the same as gluten flour. Compared to regular wheat flour, gluten flour contains more gluten, but doesn’t contain enough gluten to make seitan. If you try to make seitan using gluten flour, you’ll end up getting a rather disappointing mushy dumpling, rather than delicious chewy, meaty seitan.

Is wheat gluten bad for you?

First of all, if you are celiac or have a gluten sensitivity/allergy: yes, vital wheat gluten is bad for you and please don’t use it.

If you don’t have a gluten intolerance… then, the opinions are mixed – as with most things nowadays. Because I want you to be able to form an educated decision when it comes to your health and food choices, here is a summary of the benefits and downsides of vital wheat gluten:

Is it healthy? It's a highly processed food so while we believe it's safe to eat. We don't recommend eating a lot of processed foods.

The bottom line is that, unless you are gluten intolerant, and if you pair it with a balanced diet of whole plant-based foods, vital wheat gluten can be a versatile protein-rich addition to your diet.

What’s the difference between seitan, tofu and tempeh?

Tofu has a soft, cheese-like texture, and while it is rather bland on its own, it is excellent at absorbing flavours from marinades and spices. Tempeh, while also soy-based, has a much firmer texture and a mild nutty flavour. Both tofu and tempeh are excellent sources of plant-based protein.

Compared to tofu and tempeh, seitan boasts a much chewier meat-like texture that makes it a favourite in many recipes. Because it is made predominantly out of pure gluten and water, it has a much milder taste and can take on flavours from sauces and seasonings very well.

If you want to try a delicious seitan recipe, I can’t recommend my Vegan Spicy Sausages enough! Both my dad and my husband can’t get enough of them – they are absolutely to die for!