Ever wander a store looking for something, like a toilet bowl scrubber, and not find it anywhere? Or did you find it in 3 different places?

This was my experience when I first moved here. Since I was flying, I could only pack what would fit into my luggage and cleaning supplies didn't make the cut.

I needed a laundry basket, toilet scrubber, those sticky wall hangers for my scarves, ect. Some of these were easy to find, others a little more difficult. 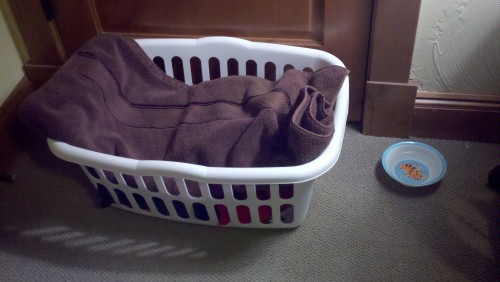 We went to one of those large retail stores, the one with a little bit of everything.

The toilet scrubber was easiest to find, and I found it in several parts of the store ... for different prices. It was practically the same item, but about $2.00 more in the cleaning section instead of in the bathroom area. Really?!? Just because it was with the mops and cleaners instead of with the toilet flappers it was more expensive.

The laundry basket was a little more difficult to find, with it being in the closet/vacuum area instead of with the other laundry items. There were some bins in an aisle near the laundry, but they were almost twice as expensive as the one I got. Although I did have to walk to theother end of the store to get it.

Why do they keep everything so far apart & separated? It would be much more convenient if it were in the same area.

I have a theory. There is no scientific basis for this (just my opinion), but I believe that they do this so we will spend more money. If we have to pass the toys and DVDs to get everything we want then we might pick up and buy some of those items.

Another thing that lead me to this theory was the location of wall hangers. The ones with the sticky backing so they don't leave a hole in the wall. Were they by the pictures? No, they were in the bathroom area next to the shower caddies.

If I had not walked all over the store, I would not have seen (and purchased) the cute little cat food bowls - which were on an island in the walkway near the arts & craft section. Completely opposite from the pet area!

Now whenever I need something, like a mini-heater, I walk around the entire store looking at the price differences of them in different aisles. This way I save a little money and get some exercise. I just have to be careful not to buy those extra items or I end up spending more than I save.