If you're interested in knowing more about sprouting, I'm here to give you a brief explanation and help you understand the basics.

To put it really simply, sprouts are germinated seeds. To start the sprouting process, seeds (beans or grains) are placed in water, rinsed off, and then put in a container at room temperature and left to grow. The seeds, or beans, grow small baby greens that are edible. These sprouts are “living” food, and can be eaten raw (raw foodies can make true raw meals with sprouted beans!) or cooked.

You can sprout most beans and some grains. Sometimes you’ll get a batch of dried beans or grains that are inactive and that won’t sprout, but more often than not you’ll see some change to your seeds or beans within a day or two. Common beans to sprout include chickpeas (for raw hummus!), black beans, adzuki beans, mung beans and lentil. Grains like amaranth, buckwheat, quinoa, and mille also sprout nicely and most only take between eight and fourteen hours to grow sprouts.

The process of allowing seeds and beans to germinate before eating them changes the chemical composition of the food in many ways. Sprouting can increase the vitamin content, and neutralize acids in the food that normally inhibits you from absorbing all of the nutrients the beans and seeds have to offer. Sprouted grains and beans are also easier to digest because the natural process of sprouting breaks the amino acid protein bond. 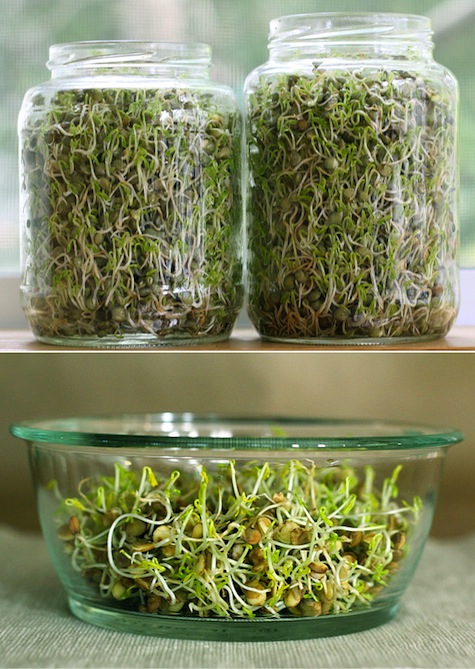