My road to a plant-based diet (Uncensored!)

Rachel asked this question on Facebook yesterday I thought I'd answer it here on the blog where I had a little more breathing room. (Comments feel too limited!)

Question: From the day you decided to transition to a plant-based lifestyle to when you were 100% eating a plant-based diet -- how long did it take? Did you give in to cravings along the way?

To understand my answer, I think it's important to see where I was coming from. and how I became a plant-based eater: 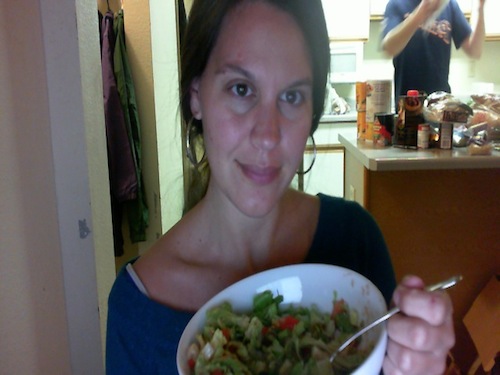 I went vegetarian at age 7 out of a love for animals -- I saw a cow when I was eating a burger, put it together and gave up meat right then and there. However in my late teens, I started eating meat again as a result of peer and family pressure.

Flash forward to my early 20s, I reverted back to a vegetarian diet after a serious health scare (I faced the C-word) and thought being a vegetarian would help  me make better food choices and be healthier. Of course I still loved animals and eating meat never really felt quite right to me either, so that aspect was in play, too.

One thing I found interesting, and maybe this was also in part because I was older, but having two motivations for not eating meat seemed to make it easier for me to stand up to peer pressure.

When I went vegetarian, I didn't know about veganism or a plant-based diet. It seems to strange to me now --how did I not know about it? But I didn't. It wasn't until I joined a local Vegetarian Society that I found out there were vegetarians who didn't eat milk or eggs and I'll admit, for a while I thought a vegan diet sounded just too extreme.and maybe a little crazy.

Then on vacation in San Francisco I decided to give veganism a whirl. I'd been vegetarian for almost a year at that point, and through Veg Meetups I'd met a few vegans. They told me about the horrors of the milk and egg industries, which really upset me, and they also said my acne would clear and I'd lose weight if I went vegan, (two things I wanted more than anything!) so I was growing more and more curious if it was "possible" for me.

So I decided to give it a go --I was in a city known for being vegan-friendly and thought if I could make it work anywhere, it would be there, let's go for it.Scott, at this time, was still a meat eater and was less-than-thrilled that I was restricting my diet even further, so I promised I'd give it up when we got home (p.s. I didn't).

By that point, though, I was mostly eating vegan anyway (I just hadn't realized it). I'd never cared for cheese, I'd long switched to soy milk for "health reasons" and I never really cared for eggs unless I was really hung over. Truthfully, the only time I ate dairy and eggs was when they were in something, like a muffin from Starbucks.

I was surprised how much I enjoyed eating this way (San Francisco sure makes it easy) andI also noticed my digestive system was humming along more smoothly (sorry for the TMI but I used to have serious digestive issues and any relief was a small miracle) so I decided to stick with the vegan diet when we got home. (Scott later became vegetarian and then plant-based, but that's another topic you can read about here).

Anyway, as a new "vegan" I wanted to learn more about my new diet so I ran out and bought two books that (unknowingly!) would forever seal my new diet. After reading Skinny Bitch and Eat to Live, I was sold. I was a plant-based eater for life. I was motivated mainly by the health aspects (I was terrified of facing the C-word again) but my choices were also reinforced on a moral and ethical grounds. (The reasons I continue on this diet now, almost 5 years later, are long and vast and I could list them for days -- but still include health and animal welfare). I also read The McDougall Program and The China Study and again, my plant-based lifestyle was reinforced by reading these books.

That said, in the first year I was a vegetarian I had one slip-- a friend invited me over for dinner unknowingly that I was a vegetarian and served me fish pate. I took a bite and then spit it out, in front of her, with tears in my eyes. I just couldn't do it -- I felt terrible even taking that bite... though I'm thankful that experience happened because it made me really come to terms with my feelings and beliefs, reinforced them and after that day I never felt the urge to bend to please someone else. I guess you can say my beliefs were cemented, never to waver again. (I actually have a fear now that I might accidentally eat meat, and that would be so unbearably crushing -- I would be so utterly devastated -- that I'm really militant about checking my food before eating it if it comes from a restaurant that is not 100% vegan. This is where my ethical motivations clearly come in to play).

In the first year I was "vegan" I think there were four or five times where I'd slipped and had something with cheese on it. I'd say half the times were accidental, and the other two -- who knows. I really can't remember. I was probably hung over or drunk -- a reminder that drinking does not lead to good choices!(Hey, I'm being honest here!)

Anyway, as time has gone on, I've become more and more careful, more and more strict. I can be a pain in the butt about it, really, if I'm going to be truthful. I will ask and ask and ask some more -- but that's what five years does to you.My plant-based diet is a continuing and evolving journey and how I am today is not how I was 5 years ago.

That's why my advice is to always try your best and aim to be better tomorrow than you were today.

I think the reason why I don't have cravings (and I never really did) and why I never feel the urge to cheat is because, while I might be willing to compromise on my diet goals, I'm never willing to compromise on my moral grounds -- and putting those two motivations together has made all the difference. I am terrified of being sick again and I know with every bite of animal product I make my propensity to get sick much more likely. That, plus my emotional feelings, makes it really easy to turn it down. I can't explain it beyond a simple "I just can't."

I just don't look at animal products the same way anymore -- I don't see them as "food" but poison. They're never an option for me and so I'm never tempted.

Anyway, I have a lot more to say on cravings... and addictions... but I'll save that for another post, but for now I'll say this: every time you give in, the vicious cycle starts all over. That's all the reason in the world to resist in my book!