Today's guest post is from JL. Post-40 JL Fields became a marathoner and triathlete, changed careers and transitioned from vegetarian to vegan. She now blogs about vegan cooking (and wine!) and fitness at JL Goes Vegan: Food & Fitness with a Side of Kaleand is the editor of Stop Chasing Skinny: Find Happiness Beyond the Scale.

I used to associate the word vegan with food. Only. I was vegetarian for many years before assuming a plant-based diet and that word--vegan--represented something very scary to me. It meant giving up eggs, cheese, butter and yogurt --I was sure those were the only foods keeping me from eating flesh.

I stopped eating meat, poultry and pork after a trip to Kenya. I attended a ceremony for work and was introduced to a goat whose sad fate was to then be slaughtered and boiled. I ate a piece of him that night, assuming a refusal to consume him would be seen as a sign of disrespect. The next day, on my way to South Africa, I phoned my husband back in the U.S. to announce that I was a vegetarian.

The journey was a bumpy one (there was one Kentucky Fried Chicken incident--don’t ask) and I played the role of fraudulent vegetarian by identifying as one but I continued to eat seafood. Four years into it I stopped eating all flesh. I continued, however, to consume that which I could not imagine giving up--dairy, eggs and honey--for three more years.

Nearly two years ago I made a decision to follow a plant-based diet. I called myself vegan but it was about the food. I gave up animal products when I discovered after a two-week cleanse, in which no dairy was allowed, that I was only an egg away from eating vegan. So I ditched the eggs and did not resume the dairy. I have never looked back.

As the months progressed, and I began learning more about the vegan diet (and being vegan in general) I couldn’t turn away from what I was seeing and learning. That how we get our dairy and eggsis as inhumane as the mass killing of animals for meat. ThatI can get calcium directly from the source -- greens from the ground -- and cut out the middleman (middle cow?).

I read about a goat named Clover at the Woodstock Farm Animal Sanctuary. She was saved from slaughter and she will live the rest of her days as a free, happy goat at the WFAS (I now sponsor her). It all came full circle. I went vegetarian because of a goat. I started eating plant-based for diet. I now embrace and claim the label vegan completely, because of another goat. 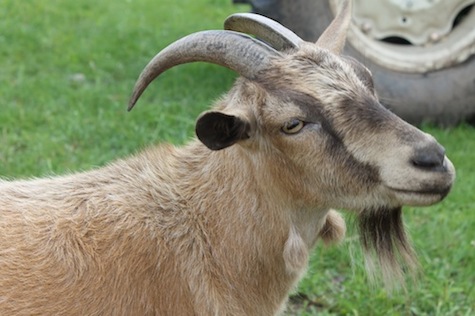 What does vegan mean to me? Being compassionate to others -- animals and humans -- and expecting the same in return.