I don't revamp my recipes too often, but biscuits keep being redone. I guess I'm on a journey to find a healthy biscuit recipe! Or maybe I'm just a perfectionist about my biscuits...

At first, I made low fat whole-wheat vegan biscuits by substituting Tofutti non-hydrogenated cream cheese in place of butter or shortening. (This was actually Scott's genius idea). Then when I wrote The Happy Herbivore Cookbook, I changed it still again by using a banana. 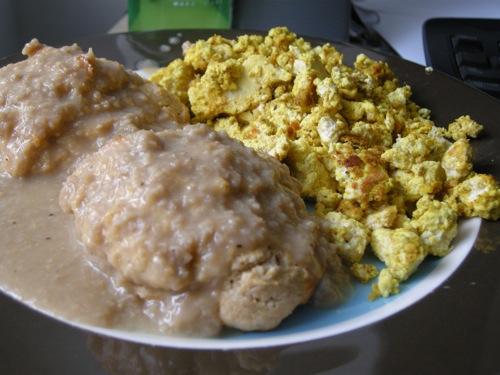 The subtle hint of banana doesn't always jive with what I am making, however, so I created yet another biscuit recipe in Everyday Happy Herbivore. That one uses white whole wheat flour and applesauce (no banana), and it was my attempt to make that recipe for breakfast that led to today's recipe.

I was all out of applesauce because I'd used applesauce for oil in a cake recipe the night before. I sent Scott to the store to get some, but he came back with 10 things, none of which were applesauce.Instead of sending him to the store again, I opted to make instant homemade applesauce (p. 277) in The Happy Herbivore Cookbook.

It's so easy to make applesauce yourself: just add an apple (or pear) to a blender with a little water and pulverize it. Voila!

I wasn't looking when I was pouring out my applesauce, however, and I accidentally dumped all of it into my flour mixture. My new recipe uses a little applesauce and some non-dairy milk, but the flour was so wet with the applesauce that there was no need for any additional liquid.

I gave it a few stirs and since the batter seemed to come together, I decided to just bake them as is, half expecting a total failure. 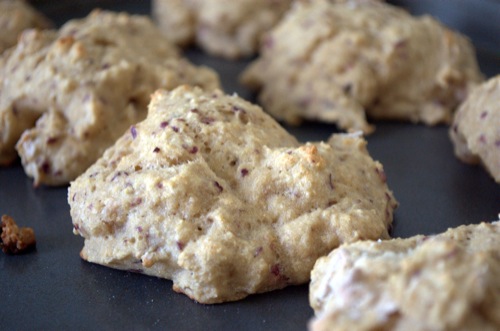 The result? My biscuits came out beautifully and really fluffy. They also had a nice light sweetness to them and a lovely speckled look from the bits of red apple skin.

I've since made these blooper applesauce biscuits two more times, once adding cinnamon and another time adding fresh rosemary. I can't even begin to say what I delight they are! A real testament that accidents are often a good thing! 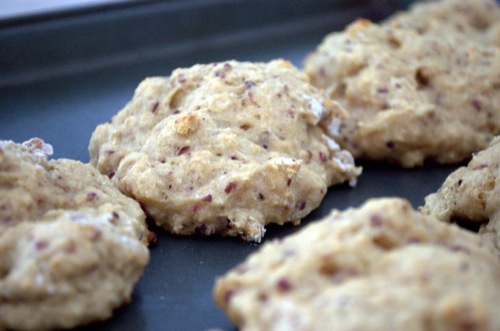 I wouldn't use these to stand in for biscuits in another recipe (for instance, they're a bit too apple-y for "biscuits and gravy") but they're a terrific and healthy breakfast biscuit option.

A slightly sweet and wholesome alternative to breakfast biscuits.

Preheat oven to 400F. Grease a cookie sheet and set aside. Core an apple and quarter. Add apple to a blender or food processor with a
splash of water and pulverize into the consistency of applesauce, adding a touch more water if necessary and set aside. In a mixing bowl, whisk flour, baking powder and a pinch of salt. (You can also add a little raw sugar or raisins for a sweeter biscuit, 1 tsp cinnamon or fresh rosemary for a savory biscuit here). Add applesauce 1/4 cup at a time until the batter is moist (wetter is better; you should use most of or all of the applesauce). Drop large spoonfuls on the cookie sheet and bake 10-13 minutes, or until firm to the touch and lightly golden on the bottom and edges.