I wanted to once again thank everyone for all the amazing comments on my memoir post. One particular comment stuck with me and I wanted to respond to it.

"I'm having a hard time understanding why you feel you can't practice law anymore, particularly since you aced your bar exam. You are probably not the only female attorney who has been sexually harassed!"

The reason I left the law goes far beyond the single instance of sexual harassment at my last job. That was just my breaking point.

At a previous job, my supervisor, a female attorney, said to one of the male attorneys that she was surprised I was rehired for another term. The male attorney said "Why? Lindsay is a hard worker. Everyone in the office likes her." My supervisor then went on to say "Well, because she dresses too sexy."

Let's put aside for a moment the question of whether I dressed too sexy or not. How is it possibly appropriate for my boss to say something like that about me to my co-worker? It made everyone uncomfortable. It also undermined me to my colleague, a colleague that I had a lot of respect for and who had taken me under his wing when I was a lowly intern. And for the record, I wore a pants suit every-single-day to the office. While I'm willing to admit they were flattering on me, as suits tend to be, they were far from "sexy." They were also much more conservative than what she wore on our occasional casual friday.

I learned later that this was just the kind of person she is. She would backstab and undermine other team mates in our office regularly. Everyone else I worked with was amazing, and we all couldn't stand her, but she was the boss. Some lawyers make the law a dog-eat-dog, kill-or-be-killed profession, and she was clearly one of them.

Two terms later I left to work at a larger law firm. From the beginning I noticed the female attorneys were not treated as equals and that there was clear gender discrimination running rampant in the office. I also saw it every single time I went to the courthouse. I was frequently asked to show identification and "prove" I was an attorney. Of course, my male colleagues, even those younger than me, never were "carded" or presumed to be secretaries. Male attorneys and court officials also often said things like "dear" and "honey" and "sweet heart" which is not only unprofessional but they did it in a demeaning way. I once left a mediation with my male boss once (I sitting in to observe) when opposing counsel said to me, "Thanks. It was so nice to look at you all day today." I could go on and on.

Despite all this, I was a good attorney and I often used their prejudices against them. I'd let them think I was some silly little airhead, all looks and no brains, and then I'd strike and wipe the floor with them. I was a damn fine attorney and after I had a lot of great experience I decided to seek out a job I deserved, where I would be rewarded for my merit. So you can imagine how it felt to learn I hadn't earned the job I was the most proud of because of my hard work, but because my boss wanted to sleep with me (or so he said). That was was the final blow for me.

So, yes, the comment is right: I am not the first female who was sexually harassed, and sadly, I won't be the last. Sometimes I feel like times haven't changed at all, but after reading this story, I'm optimistic.

Of course not every situation is like mine. I had an internship and a job in the mix that were fantastic; where I was treated as I deserved to be. And I know several female attorneys who are happy and can't offer a single complaint.

I simply don't have it in me to get back out there and "fight the good fight" because I never loved what I did anyway. I went to law school because I wanted to help people. I never felt like I did that as an attorney, but every day that I have happy herbivore....every day that I write a recipe... every time one of you sends me a thank you note, I realize I finally am helping people.

and that has made all the difference. 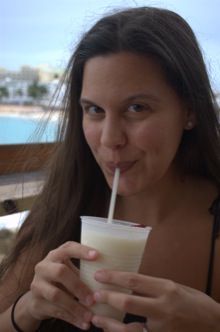