I've been living in a state where I'm perpetually waiting for the other shoe to drop for years. It's given me anxiety. It's caused me stress and at times, it's taken a toll on my relationships.

It all started about three years ago when I was let go from my fancy lawyer job after I'd complained about sexual harassment. Losing your job is upsetting but being sexually harassed is devastating. I'd always thought of myself as a strong woman, a woman who could survive anything, but when I found out that reason I'd gotten my job was not on merit but because my boss wanted to sleep with me, I my legs buckled underneath me.

I was bewildered---devastated and my dark hour only gotdarker. I realized that without my job, I could no longer afford the car I'd just bought to get me to and from the job I'd just lost. I also couldn't afford my apartment and when Scott came home two days later and said his work was planning to lay off some 60 people and he was pretty sure he'd be one of them, I wondered if my life could get any worse. I wanted to die. but first, I had to get out of there.

In one swift all-encompassing moment, I broke our lease, sold off most of our belongings, packed Scott and the pugs into my car and drove from LA to NY. I needed to go home.

Shortly after arriving in NYC I took the NY bar exam, walked out knowing I'd passed but that I'd never practice law again. It was over for me. I started looking at other jobs, other career paths, when I stumbled on a long-term freelance job. It paid exactly one third of my lawyer's salary and wasn't nearly enough to live on when I factored in all my student loans, but it was something.

Scott & I had to move into a tiny -tiny- 1 room apartment the size of a hotel room, but at least we weren't homeless, right?

What I liked most about my new job was the flexibility. I was a contractor which meant I could take long periods of time off from work and no one minded. I could work as little or as much as I wanted, and I worked from home. This job allowed me to put more time and energy into what I cared the most about: Happy Herbivore and after a few months of really trying to grow my "online brand" I had a book deal. It felt like I was finally back on the upswing. That maybe the universe was on my side all along.

This job has become a sort of security blanket for me. It paid terribly, and I didn't love what I did, but it allowed me to do the things I wanted to do part-time. I could take time off to write cookbooks, and when my husband had the opportunity to move us abroad for a year, we were able to do so since I could literally work from anywhere.

Then last week, just days away from my three year anniversary, my job was terminated. I was written off with a cold, generic email, with no deference or respect given to my three years of superb service.

The other shoe finally dropped.

Losing your job is awful, but losing your job when you're in another country where you can't just run out and get another one (because you don't speak the language and you don't have the proper paperwork) is terrifying.

My head was spinning for days. All my plans came to a screeching halt. I wondered how I'd support myself, how would I pay my student loans ($1,800/mo - don't go to law school!) and how would I survive? Would I have to leave my husband and pugs to go live with my parents? my sister? Just so I could get a job until I found another one?!

After the initial wave of panic and hysteria passed, I realized good things can happen when the security blanket is pulled out from under you. 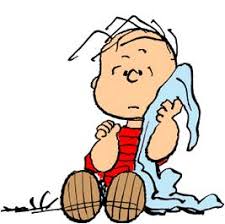 I'd stayed at what was supposed to be a short-term fix for three years because it was easy and familiar. I was not challenging myself, I wasn't growing, I wasn't trying new things. It had become a security blanket and it was time to let it go. The universe had simply taken care of that for me.

I had enough money saved up (I'd been planning to go on a long backpacking trip this summer) that I could survive for a few months before the money ran out, giving me time to think about things. Really explore my options and dive into doing what I really want to do.

Of course, losing your job is embarrassing so while I was quick to call my sister and cry all over the phone, I avoided my parents like the plague. Mostly because I knew they would worry, which I didn't want.

After dodging their calls for a week, my mom confronted me on IM (yes, she's internet savvy) and told me we needed to video chat. I loathed telling my parents the truth so I let my mom do all the talking. She'd told me that her and my father had been to the doctor recently and that their doctors marveled at how well their health had improved. They were thanking me for all the years I rode their asses about eating more plant-based meals and beating them over the head with information until they finally accepted it (they're meat-free 2 days a week, trying to get to 7 days a week). I couldn't be happier and congratulated my mom -- inquiring where my father might be so I could congratulate him too.

She said he was mowing the grass, looked out the window to his general direction and screamed "DADDIES ON THE GROUND!" and ran out of the room crying. I blinked. I was trying to process what happened. I called my cousin who lives near by and asked her to go to my parents house. I waited by the webcam for 20 minutes trying to listen for something, anything. Finally my mother came back and said that my father had passed out and was being taken away in the ambulance. She was hysterically crying and said she'd call me later. I wanted to die.

I couldn't believe this had happened. Being marooned on an island unable to get to my parents even if I wanted to, only made things worse. I reached for the rum but thought "I should be sober at a time like this." I couldn't remember the last time I'd talked to my dad and I sorely regretted it.

It turned out that he was fine. The doctors aren't sure what happened exactly but suspect it was heat stroke or dehydration, or both. The event was sobering, as death and near death experience always are.

I realized being jobless isn't the end of the world because I'm still alive. On that note, life is too short to do something that you don't love. So Instead of looking for another job, I'm going to work for myself. Do what I want to do and see just exactly where it takes me. It's sink or swim time. If nothing else, my brief unemployment will allow me to once again return to my true love: Happy Herbivore.

Expect more blog posts and features on the site to come. I have big plans!