It's a small, small world

When social media was first coming out -- and a lot of people were skeptic, or thought it was annoying, or generally couldn't see the appeal, I was all in.

I looked at social media -- or actually, let me go back one step further, I saw the Internet, as the single tool that would take us back to the village. A global village. I knew we'd become one all encompassing small town.

GaryV---who I've had the pleasure of meeting in real life, and being online buddies with, really goes into detail about this in his new book The Thank You Economy, only he says it a tad more succinctly than I am here.

Point being, it's an even smaller world than we all imagined. 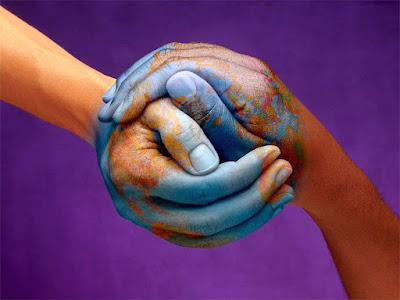 Flashback to my childhood. I spent a big portion of it in Orlando, Florida---living every child's dream of hanging out with Mickey on the weekend. One of my favorite rides at Disney World was "It's a Small World" (here is a video of it on youtube). Looking at it now in 2011, and not through the eyes of an 8-year-old in the 80s, make it kind-of corny, but I like the message all the same(even if I'll be signing the song the rest of the day. So will you if you watch the video, so I apologize).

I've always been amazed by the "6 degrees of separation" phenomenon and how small this world really is. For example, Scott went to a small military school which none of you have probably ever heard of and then yesterday, here on the island, a non-US island, we saw a car with a sticker for his college...

But what spawned this post, however, was a recent interactioncaused *by* this blog. Earlier this week, I put up a note inviting bloggers to interview me as part of my virtual blog book tour. (I've really enjoyed doing these interviews, btw -- read them here.).

One lovely woman, named Clara, wrote me and one of her questions asked where in Florida I lived... she was curious since she lives in Tampa.

I wrote her back that I lived just outside of Tampa, during High School, and that my sister still lives there. I don't know WHY I also put what High School I went to -- she didn't ask, after all, but I added "I went to PHU."

Clara immediately wrote back "PHUHS? I went there too! Maybe that's why you have always looked familiar?" Then, moments later, Clara and I realized that we were in the same graduating class.

Our high school was quite large, bigger than many private colleges (like Scott's, for example,) so it's not totally crazy that we wouldn't have instantly recognized each other (especially since we've both married and changed our names) but still...

andthis is riding ofa similar email I got a few months ago. Alissa had emailed me and said"you probably don't remember me, but I was a year behind you in middle school, lived in the neighborhood next to yours, and we rode the bus together for two years."I did remember her.

Then she continued, "Anyway, I've been reading your blog for a long time, but it wasn't until you posted a picture of yourself the other day that I realized Oh. My. God. I KNOW HER!"

I'm very happy to have reconnected with both Alissa, and Clara, even if I didn't really know Clara to begin with. I really do love these kinds of stories. Even living on this island, I am constantly reminded how small the world is --- like that my neighbor here is from the same town in PA that my entire extended family lives and they know of each other.

I think as this "media age" continues there will be more stories. and I, for one, look forward to them. I am so thankful to social media and the Internet because I've reconnected with a lot of people I've lost touch with, I've met so many incredible people -- close friends, through twitter, blogging, facebook, etc., that I can't imagine my life without them in it.

For all the unsavory parts of the Internet (privacy? what privacy?) and the fact you can't take things back, or ask for a "do over" (quoting that famous line in The Social Network, "The Internet isn't written in pencil, it's written in pen") --- there are a lot of awesome parts... and I am happy to be part of a large global village, that has a small town feel.

p.s.I'm giving away a copy of The Natural Vegan Kitchen on Facebook today. It's not fat-free, but many of the recipes are and the author focuses on fresh foods, which I really like.